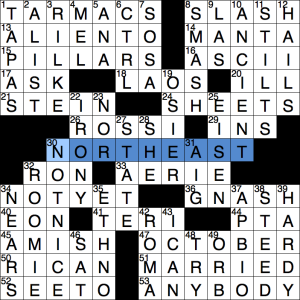 hello and welcome to episode #737 of matt gaffney’s weekly crossword contest, “Center Yourself”. for week 3 of guest constructor month at mgwcc, we have a puzzle from yossi fendel, who challenges us to find the two-word phrase you seek. all right. what are the theme answers? there are four (*) clues and four (**) clues:

finally, there’s also the central across entry: {The meta answer, taken literally, when applied to (*) then (**), gives an abbreviation for this} NORTHEAST. well, that’s curious and also itself rather meta. the abbreviation for NORTHEAST is NE, but that doesn’t really help us forward-solve; it might be useful as a confirmation step at the end. so what’s going on?

let’s look at the two groups of theme answers separately. the (*) answers are MANTA, AMISH, STEED, and HARDY; the (**) clues are ASCII, STEIN, TAPAS, and A-LIST. certainly my first thought was that “center yourself” and “the two-word phrase you seek” were hinting at the letter U, which curiously appears zero times in this 13×13 grid. and looking at MANTA, you can insert a U to make the italian city MANTUA. that was certainly an exciting find, but alas, literally none of the remaining seven answers can take a U to make another valid grid entry.

the next thing i noticed was that the first letters of the (*) clues spell MASH, which made me think of the tv show M*A*S*H, since these entries are, in fact, denoted with asterisks like in the title of the show. the (**) clues, however, give the acrostic ASTA, which is less relevant. i did think about the latin word ASTRA, which is star-related, but inserting a letter into MASH to get a word just gets us MARSH, which is decidedly not star-related.

after setting this aside for the weekend, i came back to it and finally noticed that the letters of MASH are four of the five letters of AMISH. aha! that must signify something, right? let’s take a closer look here:

reading down the columns, we have MASH, AMTA, NIER, TSED, and AHDY. other than the middle column NIER, the others each give four of the five letters of one of the words: MASH + I = AMISH, AMTA + N = MANTA, TSED + E = STEED, and AHDY + R = HARDY. this means we can reorder these four words and add a fifth to get a word square, in which the same five words can be read both across and down:

(at this point i was fairly certain from the prompt that the answer was going to be “inner peace”, but let’s just keep going.) similarly, the (**) words can form their own word square:

the missing word in each word square is determined except for that middle letter, which is unchecked because it crosses itself. so any of INNER, INTER, INFER, or even INKER could fit in the first square; PIECE or i guess PINCE could fit in the second. this is why we’re given that clue for NORTHEAST; the letters N and E complete the word squares, giving us the phrase INNER PIECE as the meta answer. (N and E are the “inner pieces” of the two word squares, taken literally.)

that’s a really neat meta. it definitely required a little bit more post-solve assembly, but there was quite a rewarding payoff at the end. and i wasn’t expecting the answer to be a punny phrase rather than a real phrase; i think both of those things contributed to this feeling more like a mystery hunt puzzle than most mgwcc metas. but in any event, it was very enjoyable.

i think the only previous puzzle i had done by yossi was a guest constructor spot at out of left field cryptics, and many of the clues in this puzzle had cryptic sensibilities:

that’s all i’ve got. thanks for the fun puzzle, yossi!

This entry was posted in Contests and tagged Yossi Fendel. Bookmark the permalink.