The idea here is that the groupings of circled letters in the four corners are meant to resemble coffee mugs. The revealer is CUP OF JOE (23d, [Common diner order represented four times in this puzzle]) which punnily tells us that the “cups” consists of famous people named Joe. 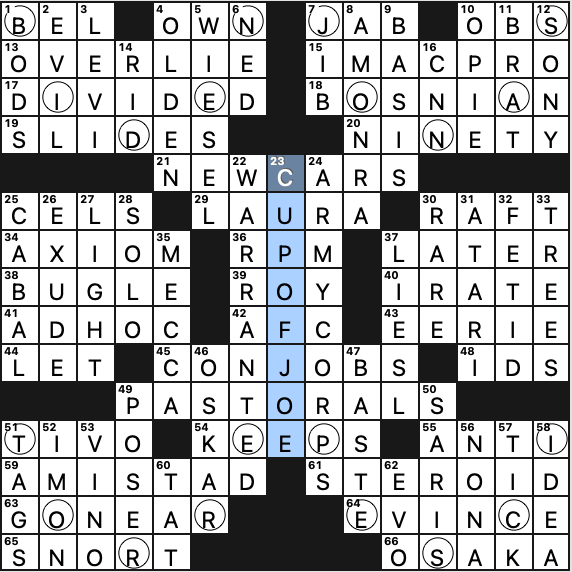 Thus we have Joes BIDEN, JONAS, TORRE, and PESCI. I think I maybe knew one of the Jonas brothers was Nick, but I couldn’t have told you anything beyond that. The rest are recognizable enough (to me, anyway).

I found the theme satisfying enough, maybe not thrilling though. I wouldn’t say the Joes are exactly cup-shaped, either, but the theme did its job in allowing me to fill in those circled squares in the lower half of the grid with just a few crossings.

I generally like it when a constructor goes for an approach different than the norm, which is the case here with the left/right symmetry. It makes sense given that each Joe is five letters long.

I did come to a complete stop at LEVI [Coffin nicknamed “President of the Underground Railroad”] crossing SLIDES [Casual footwear]. Is the latter a modern bit of slang, because I haven’t heard that before. And the former I just googled to realize we aren’t talking about a named coffin, rather a person named Levi Coffin. 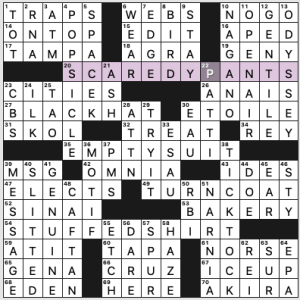 It’s not the first time this theme idea’s been used—there are similar puzzles with STUFFED SHIRT in the NYT, LAT, and erstwhile New York Sun from 4, 5, and 15 years ago. But it’s been awhile. Some of the other ‘adjective + apparel’ phrases in those other themes included SMARTYPANTS, BRASS HAT, and SILK STOCKING, along with some of Enrique’s other themers. Anyway, there are a zillion other themes that have been done before in similar ways, and it doesn’t mean the puzzles aren’t enjoyable for their current solvers!

Four stars from me. I appreciated the inclusion of ANAIS Nin, Daisy Ridley’s REY, GENA Rowlands, Celia CRUZ, AKIRA Kurosawa, CAFTAN with a West African clue, Jimi Hendrix’s “Purple HAZE,” and PATTI LuPone. I even liked GEN Y because in the grid it looks like my husband’s Tita (aunt) Geny is included. 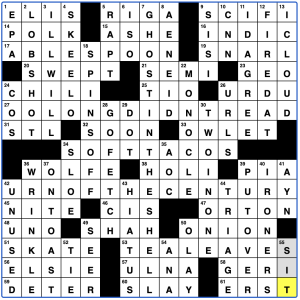 The AVCX description of today’s puzzle as “perfectly middle-difficulty”, and I’d agree with that description – this felt precisely calibrated to amuse without being overly tricky.:

Finding 3 tea-themed phrases after removing the T from each of TABLESPOON, TOO LONG DIDN’T READ, and TURN OF THE CENTURY was such a nice find that really unified this puzzle.

Here’s the winner from Eurovision 2003 (held in RIGA, Latvia, as clued in 5A), Sertab’s “Every Way That I Can” 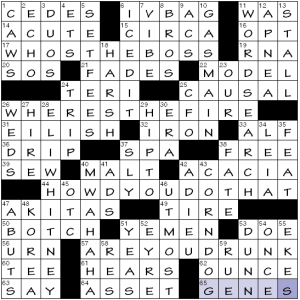 This is not dissimilar to the Captain Obvious trope that we sometimes see in crosswords and elsewhere.

Speaking to both the title and the final theme answer (as well as 35a [Impressive achievement] FEAT): 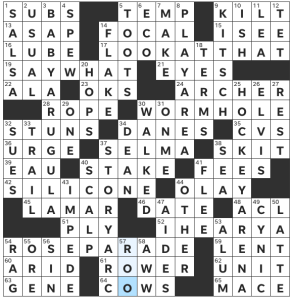 Great theme set today! It’s nice that the theme answers are constrained by the RAY needing to span both words, since it’s not an uncommon string of letters. Are there any phrases that would have broken the RAY up differently across the answer? I guess that means themers that are ___YA R___…. Idle construction thoughts. Anyways, I liked the theme and the answers chosen a lot, although given that arugula is my favorite salad green it took me a while to see BABY ARUGULA – I haven’t seen it with the “baby” prefix as much, so it threw me off. 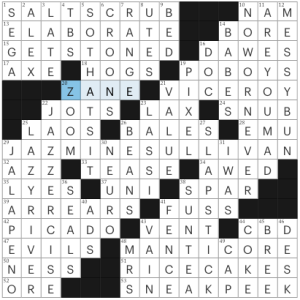 I learned a few things from this puzzle, but Erik nailed down easy enough crossings so it played like an easyish Friday NYT puzzle, which feels like exactly where a Wednesday New Yorker wants to land.

Great example of a modern themeless that spotlights the constructor’s voice, without piling up difficult crossings. Four stars from me. 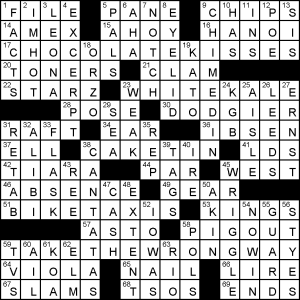 Today’s puzzle by Peter A. Collins features the classic anagram hint phrase, in this case WRONGWAY in TAKETHEWRONGWAY. All the answers feature the tetragram TAKE between there two parts. So:

The puzzle overall, including the theme, played very easy for me. There were a few extra effort clues though: