SPEAK UP is today’s revealer (27d, [“Louder!”…and a clue to the starts of four Down answers]). The other theme answers are familiar phrases whose first words can also be synonyms for “speak.” In addition, those particular words are written upwards, testing your ability to spell words backwards. 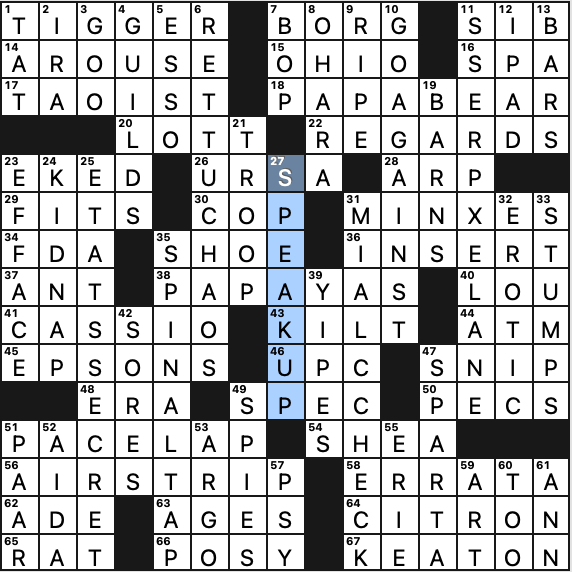 Nice, tight theme. Each phrase is well in-the-language, and each “speak” word is used differently in its base phrase.

That’s not to say I picked up on the gimmick very easily. It took quite a while for the penny to drop, despite the fact that I was staring RETTU at 6d for a long time. The aha moment I was rewarded with was quite satisfying, and I appreciate the extra layer to the theme. Nicely done.

TIGGER is a fun way to start a grid, and we also get SPINAL TAP, PAPA BEAR, AIRSTRIP, PACE LAP, and tropical PAPAYAS. Gotta say I’m not a big fan of PAPAYAS, but at least they’re better than guavas. Neither holds a candle to a fresh, ripe mango though.

Not crazy about sexist-sounding MINXES [Pert flirts], but I will note there is a current HBO comedy titled Minx which generally gets favorable reviews and was renewed for a second season. 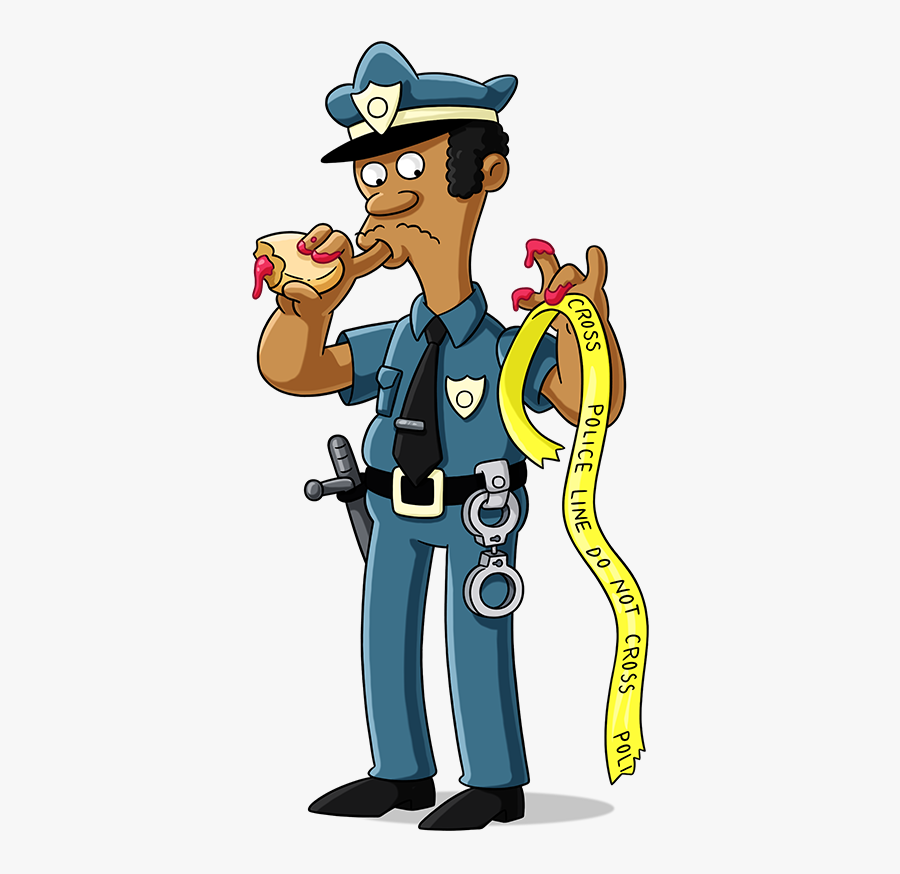 Officer LOU from “The Simpsons”

Well-constructed theme and grid with a nice twist. Four stars. 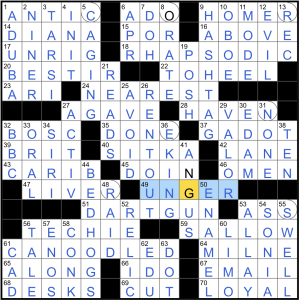 Today’s NYT is a collab between Bill Pipal and Jeff Chen that’s cute, once you piece it all together.

A bunch of entries in the grid wrap around one of the circled squares, skipping the circled letter, which otherwise spells out valid entries both across and down:

taking each of the circled letters along with 69A, we get CUT CORNERS, which is what needs to happen to parse each of the wrapped across answers correctly.  The down clues are all correctly clued for CAGING, ORATE, REC, EKING, SWELL, and RAID.

Here are many many many years’ worth of BBC 2 Idents (32D, “Largest TV network in the world, by number of employees”)

I tried to do this puzzle Wednesday night after a lovely day wandering around coastal Rhode Island and reconnecting with old friends. I was happy and relaxed and could not for the life of me figure out what was going on even after I got the revealer. Tried again this morning and poof! all became clear. Fun puzzle – when I’m awake.

I could tell there was a rebus, and indeed there is. The revealer at 56a is [Bodies that pull objects in as they get closer, as depicted in this puzzle]. The answer is BLACK HOLES. In my late-night solving session, I thought HOLE would appear in the rebus. Nope. The black squares – one particular configuration – are the black holes, so the words get more compressed as they get closer. So smart. 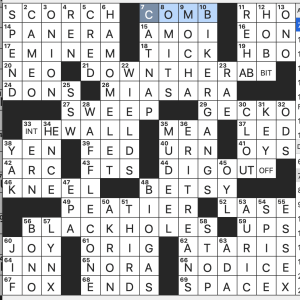 I love this theme. I love the fact that the squares next to the “holes” have three letters while the ones further away have only two. It’s creative, consistent, and fun to solve. We can send the Fireball off to its summer break with a happy smile.

What I didn’t know before I did this puzzle: that EMINEM was elected to the Rock & Roll Hall of Fame this year.

Editor:  Erik Agard
Theme: Each theme answer ends with a word that can precede “feed”. The theme answers are oriented vertically so these words are at the bottom of the puzzle. 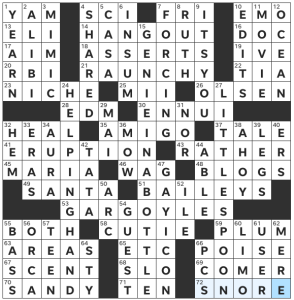 Great title, and great set of theme answers! The first two answers fell with basically no crosses for me – I’m curious if this puzzle is much harder for folks who didn’t immediately know GENIE IN A BOTTLE. LITTLE SPOON took me a while to see because I didn’t understand the meaning of “inside” in the clue. I thought the answer was going to be something like “indoor cat”.

Theme: Each theme answer is clued as it relates to cruciverbalists, but the answer is part of a commonly known phrase. 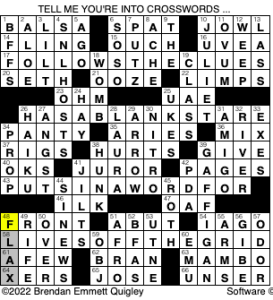 Okay, I enjoyed this so much. I thought that the theme was really cute and that the theme answers themselves were really clever. HAS A BLANK STARE felt like a little bit of a stretch, but it super works with the symmetry, and I can see why having the partial sentence is necessary. LIVES OFF THE GRID is an incredible pun, and I will be using it in the future.

The fill in this grid was pretty smooth, and I cruised through the first section, getting hung up for a second on 16a [“Eye part”] UVEA, but the crossings here fixed this pretty quickly. FOLLOWS THE CLUES was also a boon in confirming my Shakespeare knowledge with 10d [“Shakespeare character who says ‘Parting is such sweet sorrow’”] JULIET (in retrospect, it’s obvious, but I’ve actually never read Romeo & Juliet).

The middle section was nicely down. I didn’t love the reference to PANTY raids in 34a. On the other hand, I did enjoy BEQ’s little HAIKU in 26d [“I tried writing a / poem as an example / of this answer here”], and the clue for 33d [“You used to see a lot more of them”] EXES.

I struggled in the bottom corner partly because I could not remember 39d [“Stand-up comic Jim with the Netflix special ‘Comedy Monster’”] GAFFIGAN. I also thought that 66a [“Al on a track”] referred to AI as in artificial intelligence, not AL as in Al UNSER. This wouldn’t have necessarily made a difference, given that I also don’t watch a lot of racing. Also, between GAFFIGAN, IAGO, and UNSER, there are a lot of names (and men’s names in particular) here. Ultimately, the Down clues got me through.

Overall, this was a really fun puzzle and a nice little ode to crossword lovers. 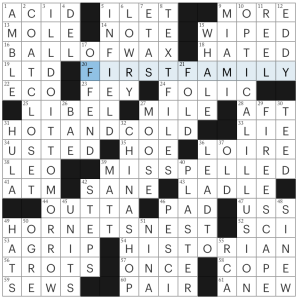 Good morning, folks! Oof… I don’t love to start out at 1-across with a cross-referenced clue. But ACID did sorta need to be clued in relation to FOLIC, so idk how to avoid it in this case. Other short fill that wasn’t my favorite included the partials I LET and A GRIP, plus LOIRE (new to me).

The two fifteens were great, ILL DO IT TOMORROW and OPTICAL ILLUSION. HOT AND COLD reminded me of my 6th grade gym class where we had to come up with a dance and my group chose the Katy Perry banger. I’ve never heard of BALL OF WAX used in the way the clue describes. It sounds kind of quaint I guess. 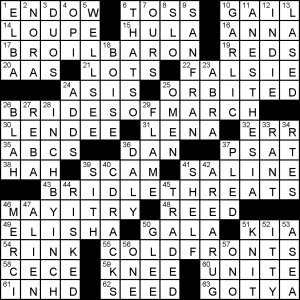 Today’s puzzle is surprisingly seasonal for us here in Cape Town – there is one of our famous winter COLDFRONTS due to arrive overnight. The letter addition done is a one ar BR to each of three entries:

It’s quite unusual to only have three examples with a letter addition theme; that said, the revealer occupies one of the four traditional theme entry slots. Not trying for the extra entries tends to give the grid room to breathe and have a more pleasant overall solve.