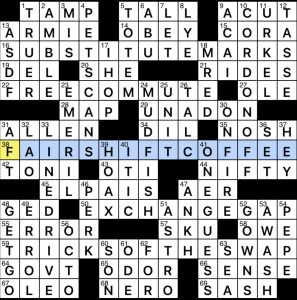 Hello everyone! This week’s theme involves replacing the word TRADE with various synonyms. 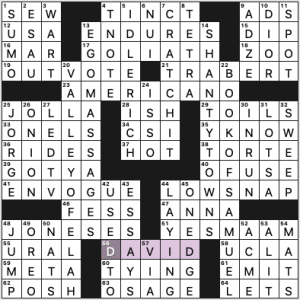 The black squares in the center of the grid resemble a slingshot, which is the weapon in the biblical story of DAVID (56a. [Classic underdog]) and GOLIATH (17a. [One known for living large and getting stoned?]). I sure couldn’t have told you that 20d. [Biblical site for the battle depicted in this puzzle] was the VALLEY OF ELAH, nor that it was in the BOOK OF SAMUEL, which is actually two books (22d. [Hebrew Bible text with the story depicted in this puzzle]). Given my unfamiliarity with those details of this Bible story, I didn’t much enjoy the theme.

The bright spots in the fill were outweighed for me by the oddities and crosswordese. The Bible’s ESAU is a distraction since he’s not part of the David and Goliath story. Tony TRABERT, La JOLLA, ONE-L’S, LOW SNAP, URAL, EGO MASSAGES clued as if this is a verb, T-NOTE, the USED TO/OF USE repeat, IS SO, ADZE, ALIT, and the wildly unfamiliar (to me) 30d. [Ramp taken by a skier], INRUN. My sports-fan husband didn’t know INRUN, either—and that LOW SNAP crossing might be trouble for solvers who don’t follow sports.

I wonder if the fill would have been smoother with THE added to BOOK OF SAMUEL to make a 15, plus DAVID, GOLIATH, and the slingshot grid art. Maybe those of you who grew up taking religious classes or reading the Bible/Torah knew the VALLEY OF ELAH was involved, but I sure didn’t and I had to work a lot of crossings there.

The revealer is DEEP FAKES (35d, [Some deceptive videos, and what the circles hold]). Theme answers are well-known words and phrases whose final letters spell out synonyms of “fake.” Entries are in the vertical direction, therefore the synonyms are “deep.” 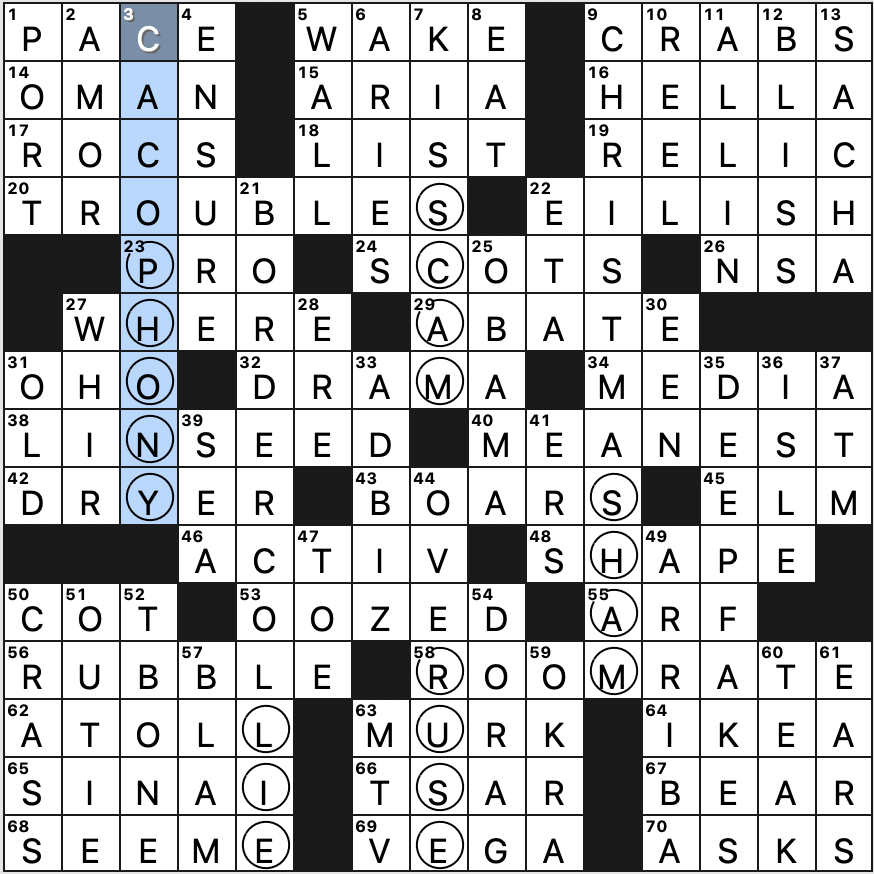 Nothing groundbreaking here, but a solid theme suitable for early in the week. It would have been preferable if all the hidden words spanned multiple words, but that seems an impossibility with the likes of PHONY and LIE. And CACOPHONY is such a fun word anyway.

The grid is heavy with theme material, so the fun fill is on the lighter side. We have ROOM RATE, TROUBLES, LINSEED, ARRIBA, and Billie EILISH as our most interesting long entries. 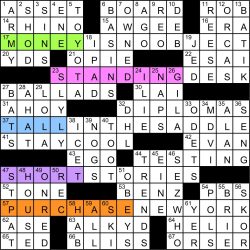 Hello there, everybody! I hope all is well and that you’re somehow handling all the stifling heat that continues to descend in many parts of the country. Please STAY COOL, everyone (41A: [Phone call signoff during a heat wave]).

There’s somer serious order in the court in today’s puzzle, as in that all of the theme entries are multiple-word answers in which the first word can also come before the word “order.”

Nope, I don’t have any issues with the word “story” appearing in the clue for SHORT STORIES. I’m sure others would carp about it, but it did not take away from my enjoyment in solving. Also, after reading the title of the second story in the clue, I had forgotten that the first one mentioned had “story.” The grid, outside of the theme answers, was mostly dotted with short fill, but it didn’t stop me from learning a couple of new words/products: SKOR (56D: [Chocolate-coated toffee bar]) and ALKYD (63A: [Resin found in paint]). ICE-T crossing “stay cool” was a pretty nice touch, and definitely a reminder of making sure to drink a lot of fluids and listen to Body Count…who won a Grammy Award last year for Best Metal Performance (38D: [“Body Count” rapper]). One day you’re singing “Cop Killer” and getting conservatives in a rage, the next day you’re winning a Grammy Award. Go figure!

“Sports will make you smarter” moment of the day: HELIO (64A: [Word form for “sun”]) – One of the all-time great drivers in auto racing history, Brazilian Indy Car driver Helio Castroneves won the Indianapolis 500 a record-tying four times: 2001, 2002, 2009, 2021. His climbing of the safety fencing on the track after those wins earned him the nickname “Spider-Man.” For many others, Castroneves is well-known not for his racing but for his dancing; he won the fifth season of Dancing with the Stars with his partner, dancer-turned-actress Julianne Hough. 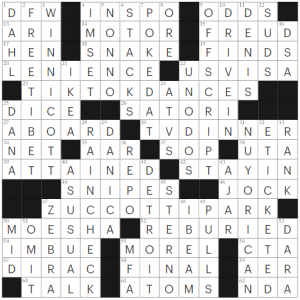 Now that I have a number of these New Yorker Tuesday puzzles under my belt, I can say that the difficulty level has been consistent. So, good on the editors and constructors.

This week’s offering presents the solver with perhaps more cultural-historical material, but there is enough general knowledge and vocabulary in the framework to ensure that it’s all workable.

Now that’s a Tuesday puzzle. I love wordplay themes and this one was fresh (so to speak) and funny. If I had a friend who was dipping her toe into crosswords, I’d send her this one because it’s accessible, well-constructed, and a whole lotta fun. We didn’t have a tag for Micah so this appears to be a debut. I look forward to more!

Each theme answer is a baking-related pun. 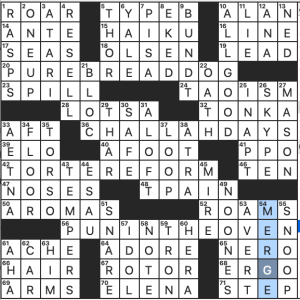 Every theme entry made me chuckle and the revealer made me laugh out loud. This is my favorite kind of puzzle.

A couple of other things:

What I didn’t know before I did this puzzle: that Angela Bassett went to YALE  and that TPAIN uses? used? Autotune.

Fun theme and themer set, even if you aren’t a sports fan. 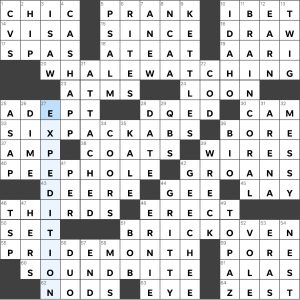 Theme: the first half of each themer is a team name in the Premier Hockey Federation (PHL)

For me, the cluing was spot on and all of the themers were easy gets. Like an orca, WHALEWATCHING practically leapt from my finger tips into the grid. If only acquiring SIXPACKABS were as quick as typing the phrase. For a moment, PRIDEMONTH had me thinking “parade” instead but not for long. What took me a while today was putting together the theme and, given the multitude of bonus fill, deciding which were the themers. Hockey is one of the sports that I know least about so I looked up the PHL to learn that it’s women’s professional hockey that is currently expanding this year with a team from Montreal! Three teams are represented in the theme today: Connecticut WHALE, Toronto SIX, and Boston PRIDE. The PHL just might get me into hockey.

Shout out to the unique grid design and great bonus fill today! The layout really opened up the grid for lots of longer entires, which I always enjoy, especially the phrases. So good! Matthew is quickly becoming one of my favorite constructors and I look forward to more puzzles by him.

THEME: Common phrases that begin with genres of fiction clued wackily as if they had something to do with literature from that genre. 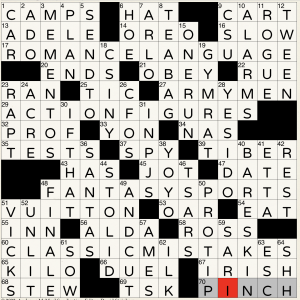 Clever one! Could’ve worked without wackifying the clues at all, but that extra touch made it feel more novel than the typical theme (pun intended). I do kinda like it better when all the clues use a parallel language, like the first two in this set: {Plural noun} in a {Name of author} book. I found it a little strange when it veered away from that for the third and fourth answers.

My second time seeing OREO clued as a wasabi flavor. The first time I saw it, I actually ordered the flavor online. I’m not gonna do that this time.

Everything else in the grid was smooth sailing for me! ARLO Parks and the idea that ETTA is a nickname for HenriETTA were new for me.