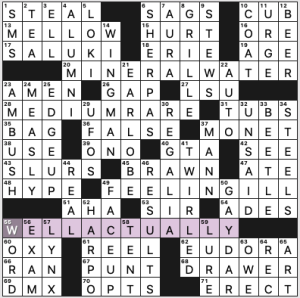 What a clever theme! It wasn’t making any sense to me until suddenly it did. And the whole puzzle was breezy, so I quickly finished filling the grid without knowing how the theme worked. It’s all tied together by “WELL, ACTUALLY …,” clued via 55a. [Nitpicker’s lead-in … or a response to 20-, 28- and 49-Across, if they were posed as questions], though many people think of “WELL, ACTUALLY …” as the start of classic mansplaining remarks.

Theme: EDGE CASES (50a, [Problems that occur exclusively in extreme situations, and a hint to this puzzle’s borders]). The entries around the grid’s perimeter are all words that can precede “case” to make familiar phrases. 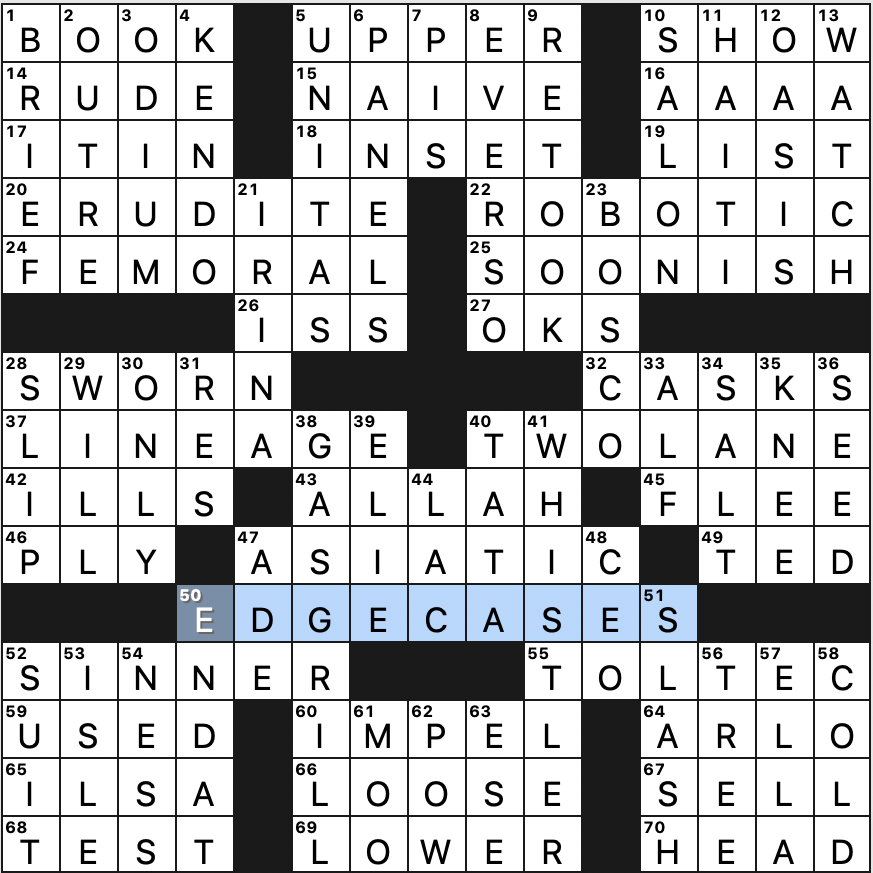 A solid basis for a theme and solid entries all around (haha). I especially liked the positioning of UPPER and LOWER. For some reason, I thought a slipcase was similar to a pillowcase, but the Internets tell me a slipcase is a five-sided box for storing magazines and thinnish books.

The fill lacks any very long entries, but we do get a couple of nice 8s: GAS GRILL and WHISTLER clued as [British Columbia resort]. Elsewhere, the 7s ERUDITE, ROBOTIC, and SOONISH are enjoyable. I needed most of the crosses for TOLTEC [Quetzalcoatl worshiper] because I tried to make it TOLMEC. No doubt I was conflating the TOLTEC with the Olmec. Also, that NW corner with OUTRE, ODIUM, and KENDO proved tricky, but gettable in the end. 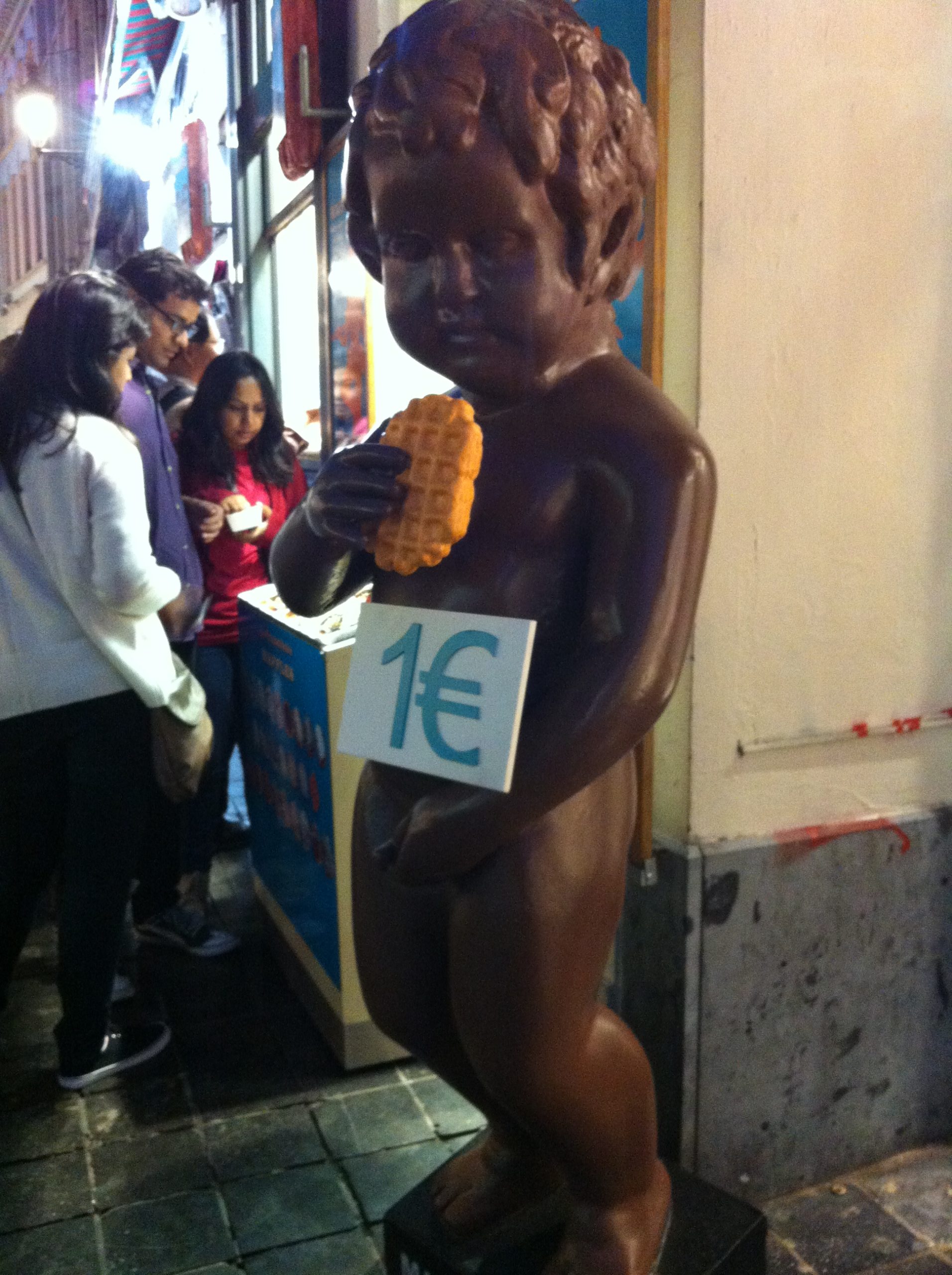 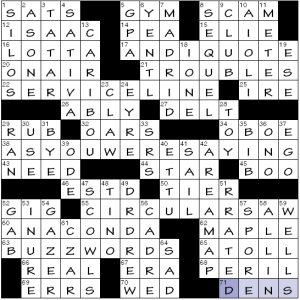 Early appointment this morning, so this will be skeletal. Will try to flesh it out later in the day.

Nothing too tough or tricky, so a good midweek puzzle. 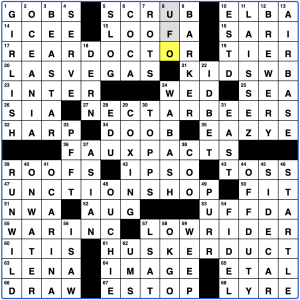 Once in a blue moon I’m on the same wavelength as a Byron Walden puzzle, and apparently there was a blue moon out when I solved “Nutmeg Seeds” last night.  It’s a pretty straightforward reveal when you see everything all together:

Connecticut is the Nutmeg State, and each of the phrases REAR DOOR, NEAR BEERS, FAUX PAS, UNION SHOP, and HÜSKER DÜ have had CT inserted into them to make new phrases.

Hüsker Dü: both Bob Mould’s punk band AND a board game! 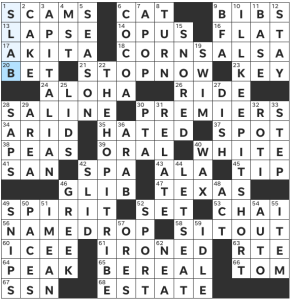 Not too much to comment on here, themewise. It’s a straightforward USA Today theme and it goes well with the title, so I’m satisfied. 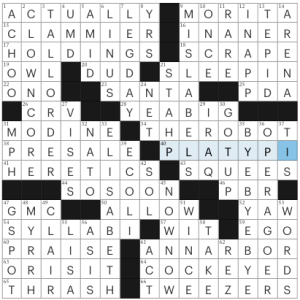 Ha! I appreciate 1-Across in this puzzle backing up what I said about the NYT puzzle’s revealer: [“Well, ___ …” (mansplainer’s opening)], ACTUALLY.

Observations, from top to bottom: Didn’t know Arnold from Happy Days (Pat MORITA‘s character) was named Mitsumo Takahashi; Wikipedia tells us Morita’s given name is Noriyuki and his Japanese American family was incarcerated in the WWII years. Not keen on CLAMMIER, INANER neighboring comparatives. PLATYPI and SYLLABI, two us –> i Latinate plurals. 66a. [Little seizers?] is a great pun clue for TWEEZERS.

From left to right: How ridiculous is it that the G-SPOT is named for a dude? How about this 2d. [Circusy aesthetic that features polka dots and bright, clashing colors], CLOWNCORE — is that your personal style? As for 21d. [“You’re too much,” in a cutesy online spelling], STAHP, I believe you can spell that with more than one A and/or H if you please.

I’d never heard of 62d. [Snotty Nose ___ Kids (First Nations hip-hop duo)], REZ, but it’s inferrable because REZ is a slangy shortening of reservation. Presumably Canadian First Nations people also shorten reserve (the term used there for those land carveouts) to REZ, since Snotty Nose Rez Kids are in Canada. I love that Hollywood is finally opening up more to Indigenous people’s stories and performances. There’s the studio picture Prey, a Predator sequel, on Hulu, with a mostly Indigenous cast; it’s quite well done. Recently started watching the Hulu series Reservation Dogs and am enjoying it. Have not yet seen the series Rutherford Falls, starring white Ed Helms and Sioux Jana Schmieding; this one’s on Peacock, and I hear good things about it. If you’ve got Hulu or Peacock, give these a look! 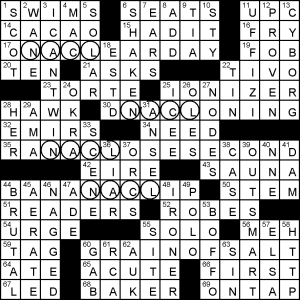 I’m guessing it’s to do with the pattern imposed, but all of the entries felt at least somewhat clunky today.

As is often the case with five entry grids, there weren’t too many bonus marquee entries. The clues were pretty quiet today as well, though all in all not much to groan at either. I’d have changed [Cookie source], BAKER to BAKED and thus replace IRONER with IRONED, which seems less contrived.