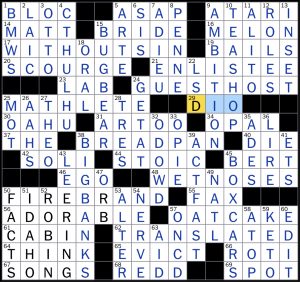 Today’s NYT is a pretty neat set of phrases, even if the puzzle that contains them is just okay:

The second word of each of these phrases is a translation of the first – “sin” in Spanish means “without” in English, “host” in Czech means “guest”, etc.  I love the concept of “false friends” – words in a language that have the same spelling as an English word, but a completely different meaning.  These have the same meaning – maybe they’re true friends?  I would have loved for all of these to be different languages rather than repeating Spanish.

61A: The Ingalls family’s little house on the prairie, e.g. — CABIN

Theme: ALL RISE (40a, [Order in the court, and a hint to six answers in this puzzle]). Theme answers are familiar phrases that feature the letters ALL which turn vertically before the entries finish in the Across direction. 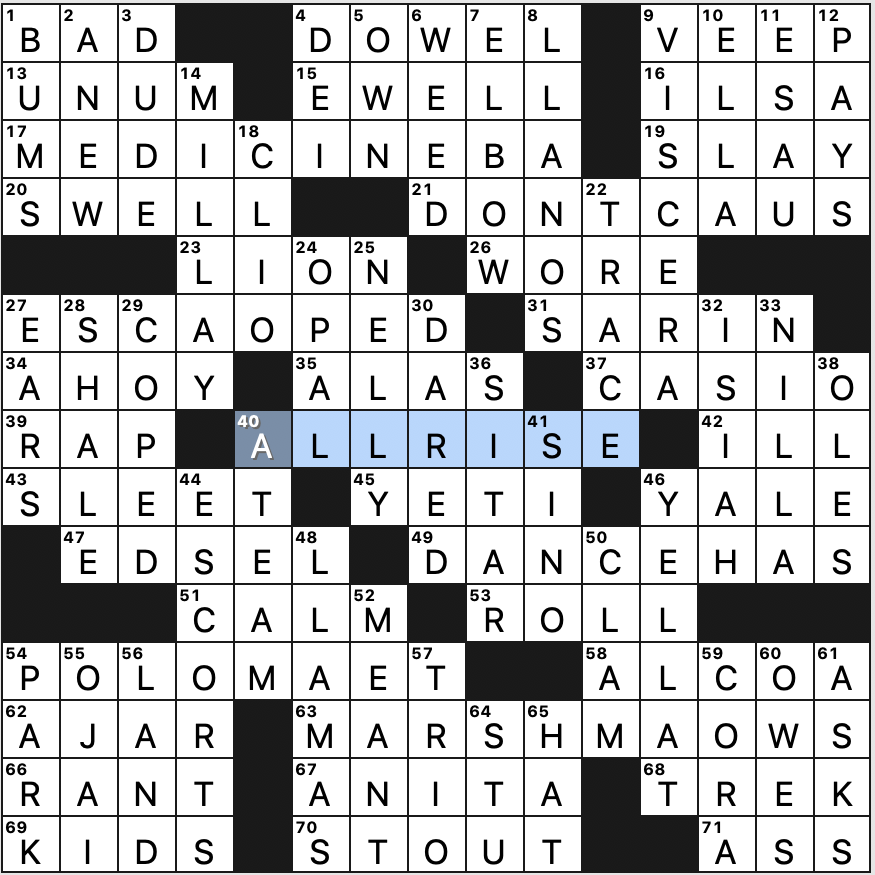 Not bad, eh? I knew the first one would be MEDICINE BALL but the difficult part was sorting out if we were dealing with a rebus or what. By the second theme answer, I had it figured out, and with a glance at the title, the jig was up. The rest flowed pretty automatically.

What’s remarkable here is that we’re dealing with seven sizable theme answers, most of which have letters in the Down direction as well. That’s a lot of theme material and a lot of constraints on the grid.

But the grid doesn’t suffer too much. I had difficulty with the right side at the confluence of SARIN / ISIAH / YALE (clued with trivia [Battell Chapel setting]), but beyond that, everything was manageable, if not exactly scintillating. I did enjoy VISCERA at 9d.

Once you figure out the gimmick of the theme, the rest of the grid is pretty straightforward. Due to all the theme, there’s not a lot of sparkly fill. 3.25 stars. 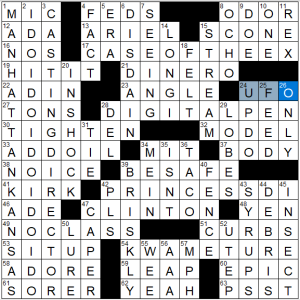 Will have to return after morning chores for the write-up, but dropping the solution grid in now. Back soon!

Well it’s not all bad that I couldn’t write up this striking grid at 730 today, because now I see there’s a theme (I very often to not see themes, but it’s more important that I do for puzzles I recap). I think I’m somewhat predisposed to asymmetrical puzzles not having themes? Even though it’s a natural workaround to a themeset where the lengths don’t match up. Interested in any constructor’s takes, if they show up in the comments.

Anyway, the title is “Split the Cost” and we have four long acrosses:

And look at that: combine the second words of each themer to find EXPENDITURE, a “split cost.” I love it.

Fun, varied theme set. KWAME TURE was born Stokely Carmicheal, a name I know more readily, but changed his name after moving to Africa in 1968 due to FBI COINTELPRO bullshit.

Outside of the theme, the triple stack is not something we usually see in the USA Today. When I was a novice solver, in the heydey of the NYT themeless triple stack, I always approached these with trepidation, but today’s is nicely accessible. I’ve always loved MANHATTAN, KANSAS‘ (home of Kansas State University) nickname as the “Little Apple,” which helps point solvers to Manhattan, while the “Sunflower State” points toward Kansas if someone is unfamiliar with the city. I DO I DO I DO I DO I DO I’ve seen in a puzzle as a theme entry, but I like it here, especially as I realize that the consonant/vowel pattern is perfectly opposite MANHATTAN KANSAS. 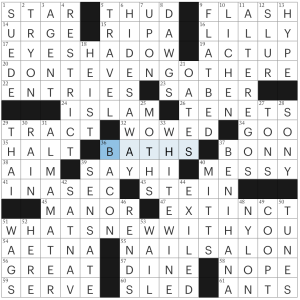 Good morning, folks! This puzzle was perhaps one of the easiest I’ve ever done. I think I could have broken three minutes had I not been solving at work and switching to another screen when people walked by. This puzzle is the exact reason why I love high-word count themeless puzzles with layouts that aren’t ambitious. Look how much fun stuff we got! Two matching spanners– DONT EVEN GO THERE with WHATS NEW WITH YOU. EYESHADOW and NAIL SALON also felt symmetric. WHITE WINE! ALTER EGOS! BENIHANA! ALMA MATER!! So good!!

All that with a pretty, interconnected grid and only two three-letter words. Incredible stuff.

This is an older puzzle of BEQ’s that he’s run before, but I don’t think it was reviewed here.

Theme: Each theme answer in this diagramless grid includes a “spoil.” 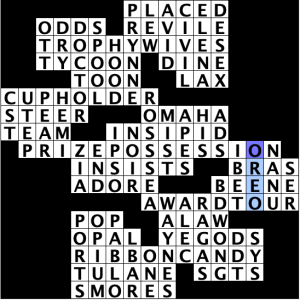 Wow, this was definitely a journey in that I did expect to do a diagramless today, and to honest, I relied pretty heavily on the puz to give me hints as I worked through this. I was excited by the prospect and while I’ve not yet totally cracked a diagramless, I like diving into them. I think that they’re an interesting way of working through a puzzle as a medium, learning what rules I know, and then learning what rules are being bent or broken. In this puzzle, I definitely feel like there was a lot of bending. I mean, this was a 17×17 with 126 blocks (43.59% of the grid!!!). But it definitely kept me interested in trying more and more diagramlesses.

I didn’t really love the theme here. Spoils are, by definitely, things often taken by force, and so TROPHY WIVES and PRIZE POSSESSION felt not great to me. I think this was mostly a title issue but still. There were also a few instances in which I felt that the cluing could’ve been, as in 39a [“Lingerie pieces”] BRAS. However, I did really like the cluing on CUPHOLDER and thought RIBBON CANDY was an interesting themer.

Finally, I also loved that OREO made the cut on this puzzle. It’s not a crossword puzzle without it, right? 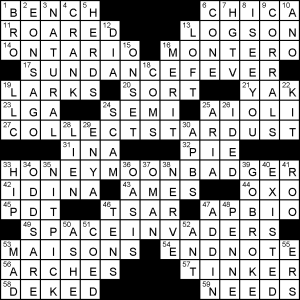 Rebecca Goldstein’s theme features SPACEINVADERS per the revealer. It’s a slightly offbeat concept, with three pairs of compound words. One of the each is a SPACE words: SUN, MOON, STAR; the other is not and the two are smooshed to make a franken-phrase. So: SUNDANCE + DANCEFEVER = SUNDANCEFEVER, [Film festival hype?]; COLLECTDUST+STARDUST = [Bucket list item for an aspiring astronaut?], COLLECTSTARDUST; HONEYBADGER+HONEYMOON = [Nagging newlywed?], HONEYMOONBADGER.

Trickier clues and answers: [Airport city east of Los Angeles] is a smaller ONTARIO. [Lil Nas X song subtitled “Call Me by Your Name”], MONTERO was a biggish hit, but fairly recent so worth noting down. [Dip in the Mediterranean?], AIOLI misdirects you as dip refers to sauce. [Outwitted a Predator?], DEKED refers to the NHL team. [When dinosaurs roamed the earth], EONSAGO sounded like it wanted to be MESOZOIC, but was more generic than that. [Like Sarah Lawrence since 1968], COED was referring to a university, not a person, although it would be a weird clue for a person to get!