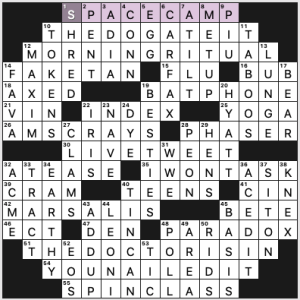 Dang, it not often that I can sneak under the 4-minute mark on a Friday NYT, and 3:30 almost makes me feel like Stella (except she will almost surely come in way below 3:30).

Briefly, because must-see TV awaits me—

Not keen on: THE DOG ATE IT, ECT- instead of ECTO- as a prefix, ADIA (McLachlan had two top-10 songs in 1998 including this one, but no others—but it has three vowels so), ATILT (wanted the more common ASKEW).

Sure never heard of this usage: 22a. [Position in an array, to a computer scientist], INDEX. What percentage of solvers work in comp sci jobs? 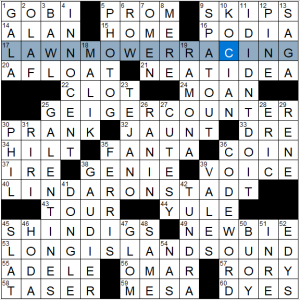 So the beginnings of each themer, put together, get us LAWN-GEI-LIND. Neat work to grab LONG ISLAND SOUND and make a revealer out of it. I’m always iffy about accents in puzzles, but even if something like “lawn guyland” is a caricature, it’s well known I suppose.

Highlights for me include GALENTINES, I DIDN’T DO IT, a Scott Pilgrim reference to clue RAMONA, and Selena and TEJANO music. 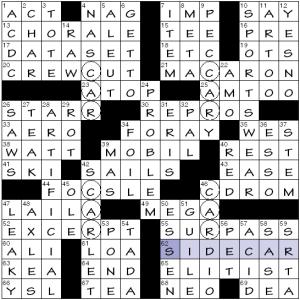 Well this was fun!

Note that all the answers are valid crossword entries in their own right—raw, rot, meta, pal, mas, pone, red, pet—even though the first and third parts are not clued independently. My suspicion is that they originally were but the editors opted to fold them into the full entry, to make the mechanism more explicit. And perhaps it would have been too messy to double-clue the first segments.

All the elements are symmetrical, which is very nice indeed. Further, two of the sidecars shunt right and two shunt left.

The only ding that I see would be the stray CAR going across (within 21a MACARON), originating from the same spot as the thematic CAR in PECCARY. Nevertheless, this is a great theme and it’s extremely well done.

Our theme is official critters that seem out of place. 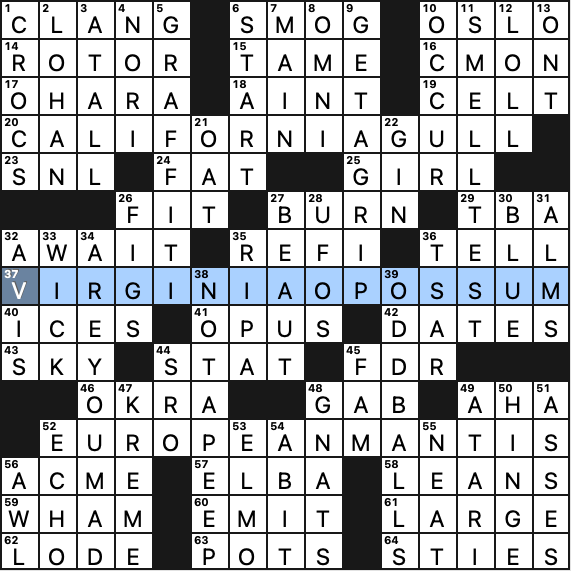 An interesting subject for a theme—one I never would have considered. I wonder what the search was like to find this set and how many were left on the cutting-room floor. I like how each one is a different kind of critter.

What’s the most surprising critter (or thing) from your state’s list of official symbols? I just checked mine (Washington), and the state flower is the Pacific rhododendron. That’s not surprising; what is surprising is that the Wikipedia page says that Dr. Frasier Crane attested that the state’s flower is mildew. (The page links to the show, but doesn’t identify that it’s a joke.)

Only three theme answers, but they’re all at least 14-letters long, providing enough meat for the grid. But that leaves plenty of room for some juicy long fill, and our debut constructor provides. GRAFFITI is a fine entry itself, but the rest are wonderful: “GET A GRIP!,” “ARE YOU MAD?,” “NOT A PEEP!,” SMELL TEST, and ODDBALLS. That’s a set any constructor would be proud of.

The rest of the fill is solid and never triggers the scowl-o-meter. Clues are very straightforward, making for a quick solve.

Theme: Each theme answer includes letters to spell out CORE on the outer edge of the answer. 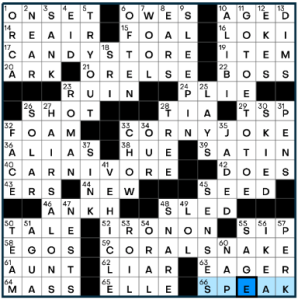 The theme here was pretty straightforward, being exactly what I expected as I solved through. It also, somewhat inadvertently, saved me when I had SIDE for 32d [“One of six on a cube”] instead of FACE, leading to some confusion with ALIAS as well. CARNIVORE clarified that immediately. Interestingly, CARNIVORE also felt like kind of a bonus themer since, unlike the others, it’s not made up of two words, but it naturally splits CORE like the rest of them.

I really liked this puzzle. Despite four themers, the fill was really strong, and the middle shapes that look so much like two tetrominos stuck together were visually very fun. I tried to enter GO HEAD TO HEAD before realizing I had the wrong body part and will GO TOE TO TOE instead.

Sorry this is late! This is a fun puzzle. I finished it correctly and had to stare at it for awhile before I understood the theme.

Each theme answer is a two-word phrase that makes no sense until you flip the word order and voila! you have a bird. 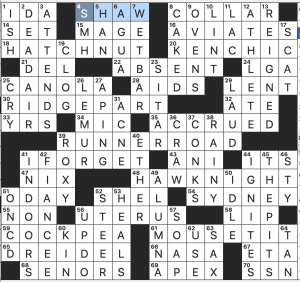 I sure haven’t seen this before, and the aha! moment made me laugh out loud. Solid, funny, just the right amount of challenging – really nice.

What I didn’t know before I did this puzzle: that Fiona SHAW appeared in “Killing Eve” and “True Blood.”