This wasn’t too hard for a Saturday, but there were a number of things that game me pause. Did we all want 4d. [Mean dude?] to be AVERAGE JOE rather than the vague AVERAGE GUY? Are we all a bit unfamiliar with 1a MEGAFAN (which Wiktionary has as “A very large mass of clastic sediment deposited by a laterally mobile river system that fans out from the outlet from a large mountainous drainage” and not “aficionado”)? Are “HMM, I SEE” and “I’M IT” truly idiomatic phrases? (I like the more idiomatic “I’M AFRAID SO,” but that’s three “I” quotes along with song “I LOVE L.A.“) I’m more familiar with APTRONYM than the R-less spelling of APTONYM. 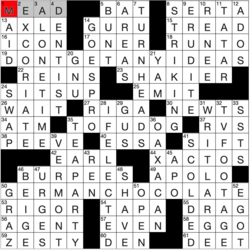 This puzzle took me past the three-minute mark, which hasn’t been true of the last couple of LAT Saturdays, so that’s something to like. That being said, I wasn’t crazy about this one — it seemed lacking to me in that hard-to-pin-down quality of “sparkle.” Although I’m not a huge fan of defining “sparkle” in a themeless to mean “lots of long entries that I’ve never seen before and/or have lots of high-Scrabble-point-tile values,” I do want to see cluing that lifts answers that aren’t “wow” words on their own. I didn’t get enough of that here.

So: There were some good clues in here, but I wanted even more! 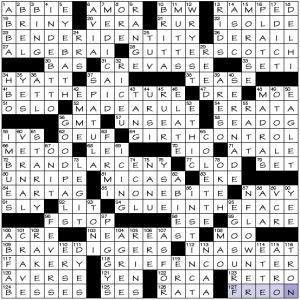 The long theme answers are phrases originally beginning with either B or G, and they’ve been exchanged for one another for wacky purposes.

In a nice touch, the Bs and Gs alternate regularly.

Okay, I was going to share Sneakers’ radio commercial for B&G Pies, but it isn’t on the web, and frankly it isn’t worth converting to mp3 and uploading. Instead here’s “House of Pies” by a totally different band. 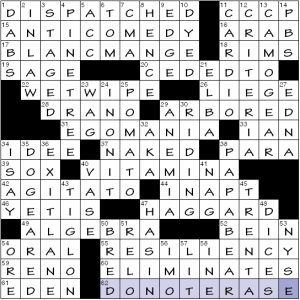 The experience for this one was: almost nothing at first, then slow, slow progress for the entirety. No real bursts or torrents of solving.

Another workout, and I’m very glad it’s over. Brunchtime! 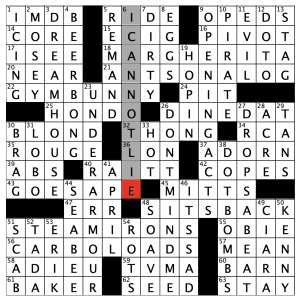 Lots to like in this Tracy Gray themeless! Felt like a very smooth ride, but Universal themelesses tend to play heavily on the easy side, so I find they feel mostly smooth no matter what.

Not a lot of 3-letter entries here! And lots of fresh stuff to boot. I really liked DOT BOMBS, though I’ve never heard of them before: [Failed internet ventures]. How’d I A) Never hear that before or B) Not come up with it myself?

I really wanted BEER BONG to be BEER PONG no matter how little sense the clue made with the latter entry.

E-CIG. I wish we would take all the CIGS out of the puzzles. Crosswords typically try to keep out stuff that should not in any way be celebrated, right? I was addicted to regular CIGS for about 25 years, in large part because of how “cool” movies made it look when I first got hooked in the 90s. The clue [Vaping device] does little to emphasize just how damaging these things can be. Four students in my school last year had to be taken out in an ambulance after vaping with E-CIGS.

Other nit is LON being clued as [Name hidden in “colonel”]. Universal does these types of clues frequently, and when they’re apt, they’re great. But sometimes I’m just left scratching my head. Why “colonel”? Is there a Colonel Lon I’m unfamiliar with? There’s so so so many words with LON in them. Why that one?