We’re back for another Sunday NYT, and this one’s thankfully written by people who are who they say they are! Let’s dive in: 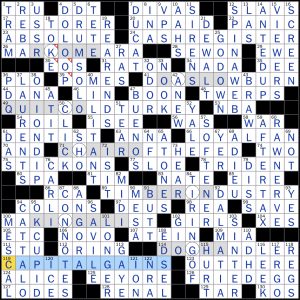 – 41A: DO A SLOW BURN [Seethe (Norway)]
OSLO is shaded, with A circled amidst it

– 49A: QUIT COLD TURKEY [Give up all at once (Ecuador)]
QUITO is shaded, with C circled amidst it

– 71A: CHAIR OF THE FED [Major player in U.S. economic policy (Egypt)]
CAIRO is shaded, with H circled amidst it

– 89A: TIMBER INDUSTRY [Boarding group? (Switzerland)]
BERN is shaded, with I circled amidst it

– 100A: MAKING A LIST [Activity for Santa (Rwanda)]
KIGALI is shaded, with N circled amidst it

– 119A: CAPITAL GAINS [What this puzzle’s circled letters are with respect to the surrounding shaded squares?]

To summarize, each theme entry contains the name of a world capital city and inside that capital (“In the Money”) is a single letter. Those single letters (letters that those capitals had gained, thus CAPITAL GAINS) spell out KA-CHING, the sound of a CASH REGISTER (24A). This was a cute, consistent theme that had a few nice payouts. CAPITAL GAINS and KA-CHING were both fun revealers for me, and I also appreciated the geographic diversity of world capitals represented. The dual meaning of capital also made for nice interplay between the puzzle’s title, themers, and revealer(s).

I also really enjoyed some of the cluing in the puzzle, including:
– 78A: TRIDENT [It’s good for three points] – I was relieved to not have to know sports here!
– 89A: TIMBER INDUSTRY [Boarding group? (Switzerland)]
– 125A: EEYORE [Sad ass] – Quite literally!
– 5D: DRUM SOLO [Special collection of musical hits?]
– 15D: VIEWERS [Watch parties?]

There were some dings against my solving experience. For whatever reason, this puzzle didn’t CLICK for me and it took me a long time to get a foothold. When the top of the grid has clues like [Old map inits.] and [Old gold coin] as well as the full name of a golfer whose last major win was over twenty years ago, I know that I’m personally going to have some trouble. Your mileage may have varied, though, and I hope you were able to get a smoother glide into the grid than I was. I also got super stuck in the DO LOOP, EOS, POMES section in the NW corner and had to reveal those answers.

Other random thoughts:
– 7A: DIVAS [Big voices with big egos] – I was genuinely stumped when MEN wasn’t the answer here and spent a few seconds trying to find a five-letter synonym.
– 94D: CATTALO [Hybrid farm animal] – Apparently, this is the same thing as a beefalo, a cross between cattle and buffalo. For a moment, I wondered if it was somehow a cat/buffalo hybrid. TIL!

That’s it for me for now. What did you enjoy about the puzzle? Can you think of other phrases that could have served as theme answers in this puzzle? Comment below!

The bar is raised pretty high for these Sunday freestyle grids based on the previous two. I don’t know that this one is quite as smooth as those, but it’s got plenty of fun entries. 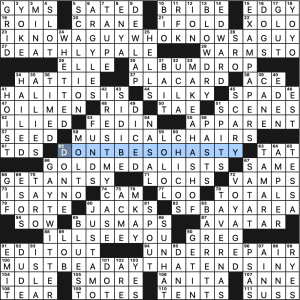 Let’s start off with the two grid-spanners. I KNOW A GUY WHO KNOWS A GUY is a lot of fun and I wanted it to continue, as featured humorously in this Weird Al song. On the other hand, I’ve never heard the phrase “MUST BE A DAY THAT ENDS IN Y.” The tough part for me was I was filling it in from the end and it was a challenge to parse _ENDSINY without knowing the phrase.

The next highlight is that central stack of MUSICAL CHAIRS, “DON’T BE SO HASTY,” and GOLD MEDALISTS, all crossing MAKE A HASH OF and “I REST MY CASE.” Just lovely. I needed every cross for Gabourey SIDIBE, but otherwise, the rest of that central section fell easily.

But do people really say “JUST A MO“? And no one ever says SF BAY AREA (locals [like me, once] just say “Bay Area” and others spell out the city name). I also contend that if “ample”  means “enough,” something can’t be AMPLER (i.e. more “enough”).

There’s a smattering of challenging fill in the grid, but overall, loads of fun long entries win the day. Four stars.

THEME: Common phrases with letters of the alphabet in them are reimagined wackily with the letter being replaced by a homophone. 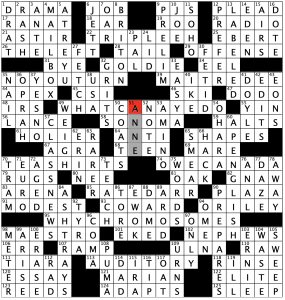 This was a fun one! Not exactly what I’d call a “ground floor” puzzle type, but maybe a first floor? This is the type of puzzle that turns new solvers into lifelong ones. Fun, clever, plenty of little AHAs. Sure, we’ve seen this theme type before, but it’s in good hands here. And of course, the added layer of the letters spelling our something, which constant solvers of Birnholz puzzles knew was going to happen a as soon as the theme was grokked. There’s an added suspense with that, which kept me from jumping to the bottom of the puzzle as I knew there would be a revealer that I didn’t want spoiling my puzzle for me. I wanted to figure out the word myself before I got down there.

Favorite theme entries were “NO! YOU TURN!” which is just hilarious as I try to put that into a context where someone would angrily say that to someone.  And “WHY CHROMOSOMES?!?!” which sounds like a scientist who hasn’t left the lab for a social outing in quite a long time.

There’s a bit of an elephant in the room with ANNE Heche appearing so casually clued [“Six Days Seven Nights” actress Heche]. In case you missed it, Evan released this statement about it:

ANNE at 51D is clued as [“Six Days Seven Nights” actress Heche]. Although the clue is factually correct, it’s especially horrible timing given Heche’s tragic death on Friday. I had submitted the final draft of the puzzle a week before her car crash, but even though I couldn’t have predicted this would happen when I wrote the puzzle, I am still sorry about that clue. Crosswords are generally supposed to be fun and leisurely escapes from the troubles and tragedies of life, and I regret that this clue may have been a brutal
reminder of one of them, even if unintentionally. I had read that the owner of the home
that was destroyed in the accident and her pets are alive and physically unharmed, but
the whole situation is very sad.

I hope you will enjoy next week’s puzzle, and again, my apologies for the 51D clue.
Thanks for reading.

I don’t think ANNE Heche would’ve minded this appearance. However, Evan’s puzzles are, from what I have experienced, very socially conscious and sensitive. This statement only highlights the respect that he has for the community.

I solved this one quite steadily, landing a time in under 10 minutes, which is rare and fast for me. I’m typically in the 12-15 minute range with Evan’s puzzles. I solved with a smile, and the breeziness felt just right for the theme.

Two eye-roll moments (not in a bad way) for me were:

That’s it from me today.

P.S. My favorite ANNE Heche movie is Return to Paradise. If you haven’t seen it, I highly recommend. Very intense movie about morality with so much to digest. I don’t think it’s all that popular a movie despite the strong cast. But so good.

THEME: The starts of common phrases collectively sound like the word EXCELLENT

Well this was a bit of an odd one. I totally did not see that revealer coming and the puzzle did have me saying “EGG…CELL…LINT” aloud. Big time eye roll and chuckle at the same time. So it did its job, for sure.

The revealer is hilarious. All three words collectively sound “Great” indeed. This is one of those rare puzzles where figuring out the whole theme after the solve works just fine. I think I prefer that to a mid-solve AHA moment. The dad joke is stronger that way.

New for me: MIRA Nair. KING Valkyrie. And Geirangerfjord (inferable).

Really liked: “SOME PEOPLE!”and the RIHANNA fun fact [Singer honored as a national hero of Barbados].

The title is the only thing that I find rather bland. I think they had trouble coming up with one. It doubles as a clue for the revealer. Or I’m just not getting it.

4 stars today from me! Enjoy your Sunday.

Theme: Each theme answer is bookended by letters spelling out TABLE, making the letters side tables themselves. 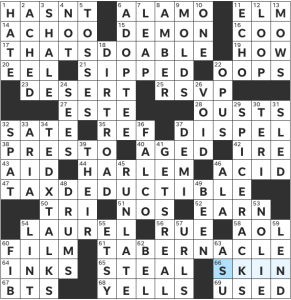 I definitely learned something new in this theme set as a long-time renter, so it’s good to know that mortgage interest is TAX DEDUCTIBLE. Personally, I found 55a a little tricky since the Mormon TABERNACLE refers specifically to the Salt Lake TABERNACLE versus a day-to-day place of worship would just be a temple. The other odd thing about TABERNACLE here was that it was one word in comparison with the two words making up the other themers.

Balancing this out, the rest of the fill was really rich with TEDX TALKS, GETS REAL, and SPICE RACKS. I also thought 18d [“Track on a country album”] DIRT ROAD was hilarious.

A few other faves: 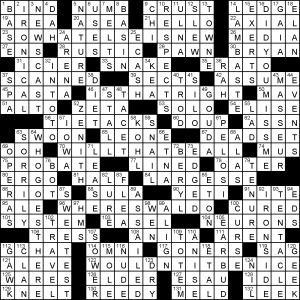 MaryEllen Uthlaut’s sunday theme features clues that are questions answered by the answers in the grid, but in offbeat ways: