Theme: Familiar phrases are given an added UP at the beginning. The second words also change meaning to wacky effect. 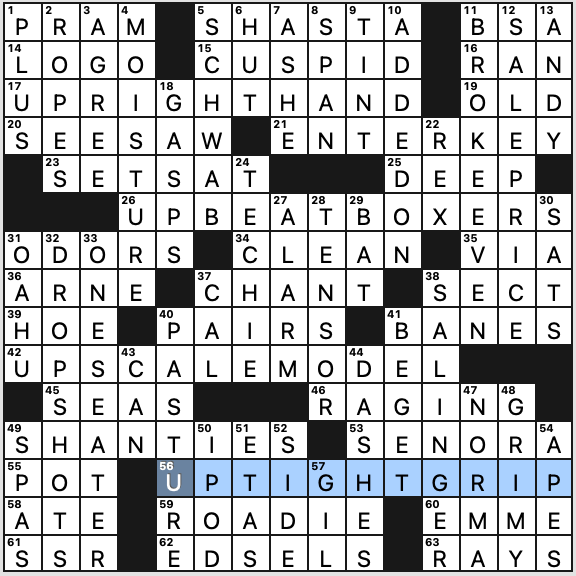 Pretty straightforward, especially given the title. But it works consistently and smoothly. No complaints here.

My solve started off slowly. It felt like there was a big leap up in clue difficulty from yesterday to today. At least at the start. I had to almost completely skip the NW section and return to finish it off at the end. Thankfully, once I got into the groove, things proceeded more efficiently. Having a repetitive theme definitely sped things up.

Top fill: BROKE EVEN, DROP SHOTS, SALINGER, ONE-SEATER. I can never remember ARNE [“Rule, Britannia” composer]; maybe he doesn’t show up in crosswords as much lately? Interestingly, ARNE has only 287 appearances in the Cruciverb database (going back to 1993), while ARNO has 444 despite having an O where the E was. 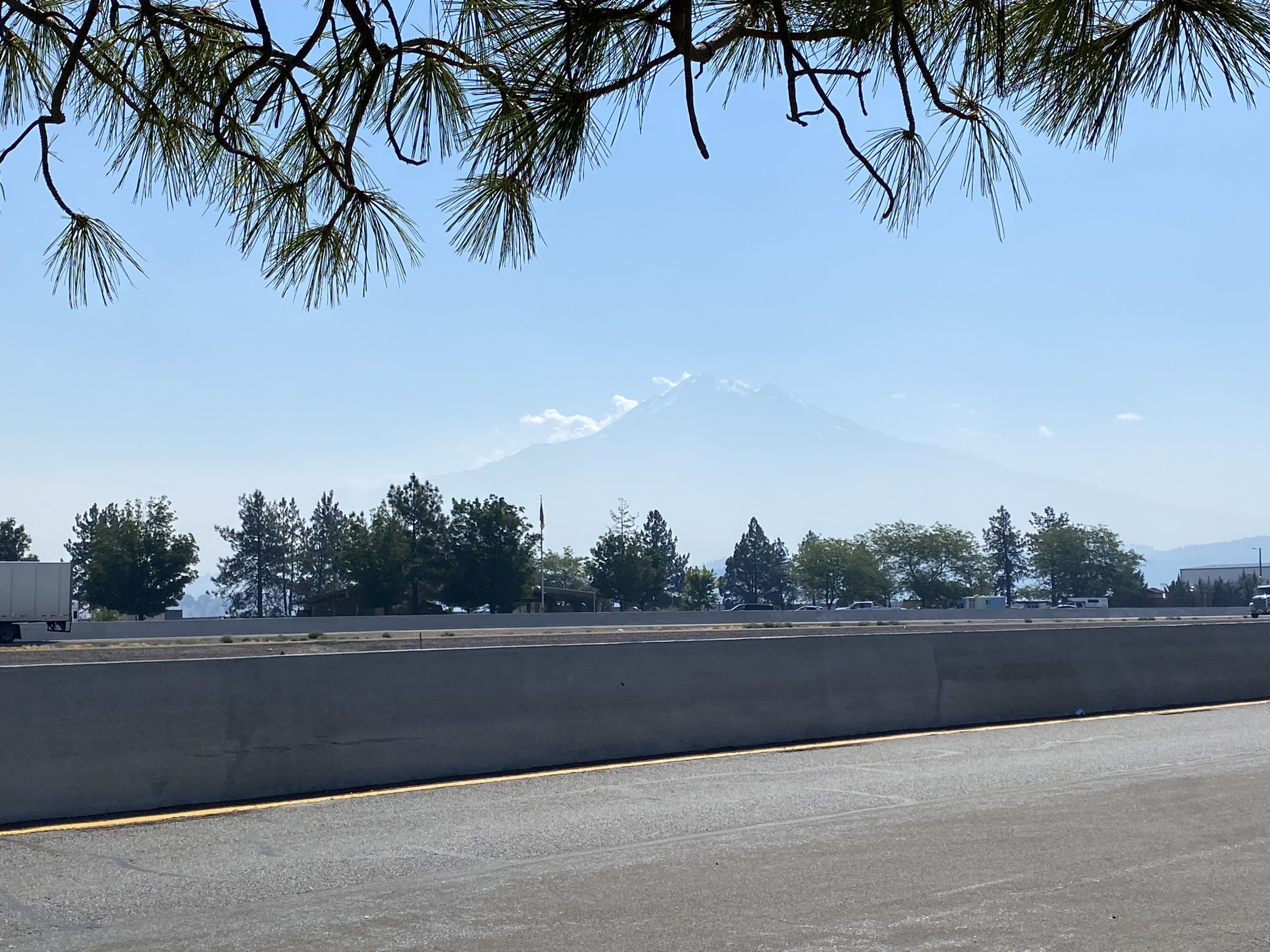 In an effort to cement ARNE in my brain, let’s go out with a little “Rule Britannia.” 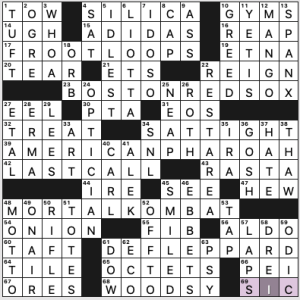 The revealer is 69a. {[not my typo]}, SIC. Not really necessary for grasping the theme, but a cute addition.

24d. [A sight for sore eyes?] feels a hair off-base for OPTICIAN, since you might have a little eyestrain with an outdated glasses prescription, but “sore eyes” are a different thing, if you ask me.

3.75 stars from me. Bits like ODIC and ALDO aren’t so welcome, but overall a solid Wednesday offering. 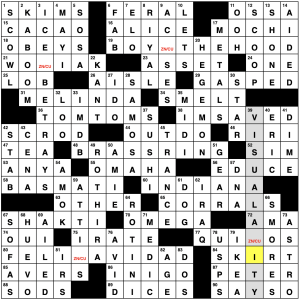 Today’s grid from Adrian Johnson had some circled squares that didn’t show up in my .PUZ file, but which make so much sense in light of the theme.  This is one of those cases where the across and down are expecting different letters out of the same squares:

If you’re a chemistry-minded person, you know that Zn is zinc, Cu is copper, and together they can make BRASS, so each of the spots where these entries meet in a circled square is a BRASS RING (48A, “Metaphorical prize found literally in this puzzle’s special squares”)

The spongmonkeys, which were an early flash animation success, internet-wise, before we really even had Youtube, becoming a Quizno’s ad/spokesperson, was a truly wild moment of watching something I knew from the internet become part of actual culture. 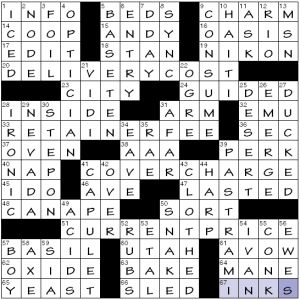 I can’t do better in describing the theme than simply citing the title. See above. 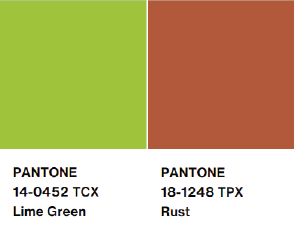 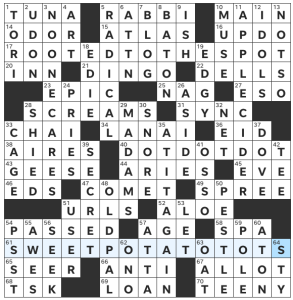 Solid USA Today theme that’s elevated by three high quality theme answers! I love both the grid spanners especially. DOT DOT DOT is good too, but it’s a bit less interesting since the OTs are used in the same way in each word, and I wish the clue had been more fun since it’s a phrase with so much potential.

This puzzle took me a long time to get a foothold on – my first pass through the top half across clues gave me about two answers I was sure of. There were lots of specific clues I didn’t know – [Religious title held by Amy Perlin] for RABBI, [Wild dog in the Dreamtime] for DINGO – and lots of things I just guessed wrong on – “acers” for DELLS, “irk” for NAG. I ended up with a just slightly higher than average time, but this was definitely the trickiest USA Today I’d done in a while. Despite this, I liked the specificity of the clues because it gave the puzzle much more flavor than if the clues had been boring for the sake of being easy.

Favorite fill: AT IT AGAIN, APPLE CIDER, NO ONE CARES

Favorite clues: 5d [“The Body Is Not an Apology: The Power of ___ Self-Love”] for RADICAL, 1d [Kelly who sang in “Sing”] for TORI, and of course [“Sally’s Take on the USA Today Crossword” is one] for BLOG!

Favorite mistake: 43a [Birds that love golf courses]… I really thought this was gonna be a joke about eagles (or birdies, y’know). But no, it was just GEESE. 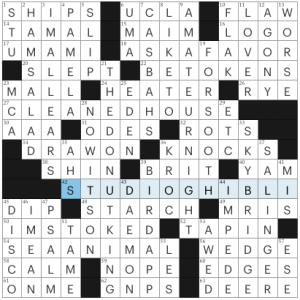 Faves: ASK A FAVOR, CLEANED HOUSE, ODES clued [Sharon Olds collection with poems dedicated to the hymen and a hip replacement, among other subjects] (I bought that book!), STUDIO GHIBLI, “I’M ALL EARS,” new-to-me THE DONUT KING (Vietnamese donut joints are a West Coast phenomenon, I think), FORSOOTH, SKYBRIDGE.

Not sure I’ve seen [Tongue-in-cheek name for Twitter, from the creature in its icon], BIRD APP, but the BIRD part was a gimme.

Friday NYT difficulty level, maybe a bit harder than I expected for a Wednesday New Yorker. Four stars from me. 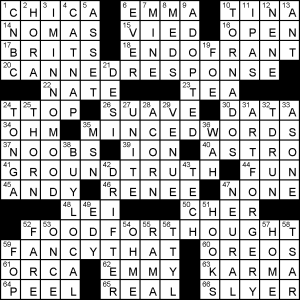 Katherine Baicker & Scott Earl’s puzzle today is revealed at [Something to chew on], FOODFORTHOUGHT. Each two part answer has a first part that is a past participle associated with food and a second part associated with imparted knowledge. The execution of the revealer is a little vague, but it kind of works? So:

Immediately, I had UB40’s first smash hit going through my head post-solve.