Are you stumped, as I was, as to what the theme of this puzzle is? I’m not totally sure I’ve figured it out, but I’ll give you my best guess. 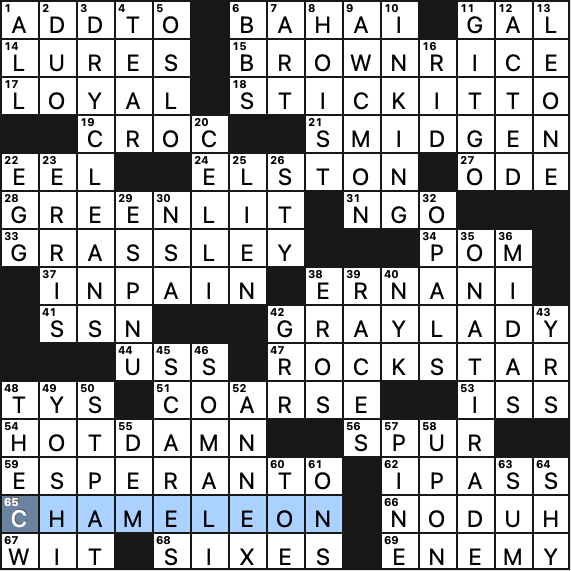 My solve proceeded thusly: I had filled in nearly the entire left half when I got to the revealer at 65a CHAMELEON [One of three hidden in this puzzle, based on its surroundings]. So we’re looking for chameleons, eh? But I could see nothing on the left side that pointed to anything hidden.

Next, I came to 13d LEONE [Currency in Africa’s Freetown]. Aha! Could this be part of a CHAMELEON? But where was the rest of it, and why didn’t I see any other parts in other sections of the grid? I decided to finish off in the SE.

After some struggles with ERNANI, especially crossing NYK and RACES (clued opaquely), I again saw no other parts of a CHAMELEON. I decided LEONE was a red herring.

Chameleons change colors, right? And there are three long entries with colors in theme: BROWN RICE, GREEN-LIT, and GRAY LADY. So that must be it. Are the letters in the colors somehow changed from the letters in CHAMELEON?

Try as I might to change letters around, nothing worked.

The revealer says “based on its surroundings.” So, what’s around those colors? Well, nothing above or before or after each color seems to pertain, but below each “color” phrase is another entry of the same length: BROWN RICE & STICK IT TO, GREEN-LIT & GRASSLEY, and GRAY LADY & ROCK STAR. A stick is usually brown, grass is usually green, and a rock is often (though hardly always) gray. Okay, I get that. But how are those things chameleons?

I’m not sure I totally buy that explanation, so if you have something better, pray tell.

Fill-wise, I love that SW corner with “HOT DAMN!” and ESPERANTO. DRY CLEANS is nice in the NW and SMIDGEN in the NE. ON A TIRADE feels a bit artificial, but it works. I didn’t know ELSTON but the crossings seemed fairer than ERNANI’s.

Well, I often like something different, and this is definitely that. It did require a fair amount of post-solve cogitating to sort out (at least on my part) so I’m not sure it totally works, but it gets points for ingenuity. Four stars. 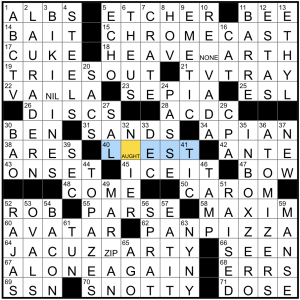 We’ve got nothing going on in today’s NYTXW:

Each of these phrases contains a word meaning “zero” in one of its boxes – NONE, NIL, AUGHT, and ZIP.

Theme: Each answer adds a TEA sound to a common phrase. 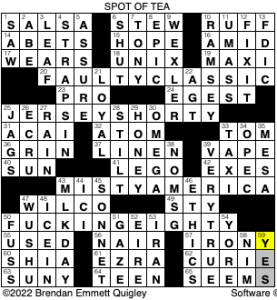 As always, this is an interesting theme, though it was interesting that the title focuses on tea as in the drink but the added letters are the homophonic TY. I thought that FAULTY CLASSIC and and MISTY AMERICA were fun, and as always, I forgot how many years make up a score (this feels like one of those facts that just doesn’t want to adhere in my brain),so it took me a minute to fill in FUCKING EIGHTY.

Fill-wise, I really enjoyed this puzzle. 4d [“Gets ready, as for an amusement park ride”] STRAPS IN felt like a visceral clue, and I thought 46d [“Good subject”] ETHICS was super clever. I also enjoyed 28d [“It might give you a leg up”] for STILT, 51d [“Male ___”] GAZE, and 64a [“TikTok dance participant”] TEEN. Plus, it was fun to see both 9d [“Seehorn’s ‘Better Call Saul’ character”] Kim WEXLER, and 62a [“Marie who coined the term ‘radioactivity’”] CURIE. 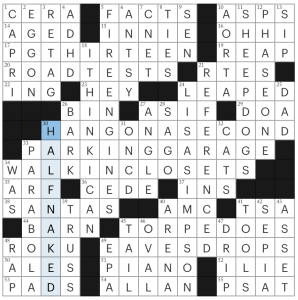 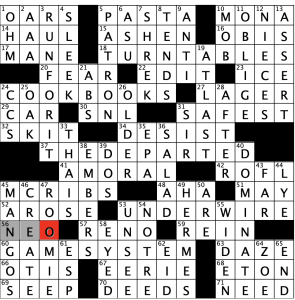 I enjoyed this puzzle a lot more before I started explaining it right now. One of those that I think is best not overthought. I do think that the word “the” couldn’t be more bland of a “secret” word. My curiosity was piqued when I hit the first themer.. “oooh…. secret word! I wonder what it is!” and then it’s just…. “the.”

I’ve also been on the phone with the cable company for over two hours for what I thought would be a very simple issue, so if any frustration is seeping into this post, please forgive.

That’s all! everything else seemed fairly par for the course. 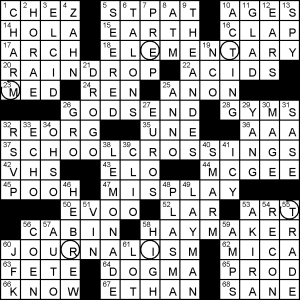 The central fifteen of this puzzle is SCHOOLCROSSINGS, and there are circled letters spelling out ETMTRI, but those are just place markers for where the crossing occur. ELEMENTARY school crosses its posher cousin PREP school and an ACTING school. CHARM and MED schools intersect at the M. ART and TRADE SCHOOLs connect at the top T. JOURNALISM school has two crossings: HIGH and HEBREW schools.

The theme was certainly an intricate affair, although the lack of marquee answers beyond the 15 means the solve itself was more muted.