This themeless did indeed feel moderately challenging, so for once I agree with the editor’s assessment. When there’s a Game of Thrones reference running all the way through the middle of the puzzle, I’m in for at least a bit of a struggle. Everything I know about GoT, I learned from crosswords. This is also true of The Simpsons and many of the “prestige dramas” of the past few years.

Despite my stumbles, I enjoyed the puzzle! It was satisfying to see it all fall into place – eventually. 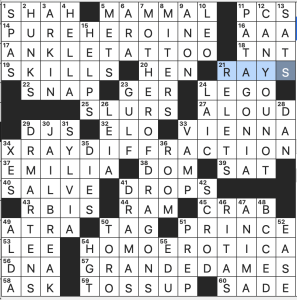 What I didn’t know before I did this puzzle: see above re: MOTHER OF DRAGONS. I also did not know that Lorde’s debut album was PURE HEROINE, that Viola Davis is a LEO, or that Brie Larson starred in ROOM. 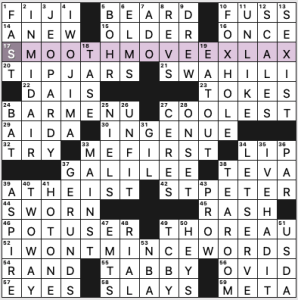 Sorry about all the shorter-than-usual write-ups this week. Work is extra-busy these days, just trying to keep other obligations to a manageable size.

TOKES and POT USER are timely since I did the puzzle a few minutes after complaining that someone’s skunky weed fumes were wafting through my window. I miss the old days when pot smelled like pot and not skunk juice.

[It’s not your fault] a tricky clue for LET SERVE, meaning the tennis court umpire doesn’t call a fault when your serve hits the net. Didn’t know that LET SERVE, as opposed to just LET, was in-the-language. Is it? 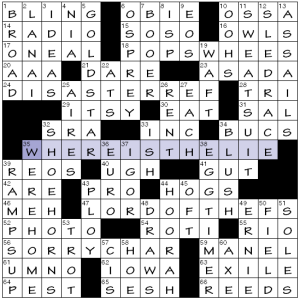 We’ve dropped a trigram from the themed entries.

After recounting the themers, I see that the first one is an outlier not just because it’s a weak original phrase. It’s also the only one that isn’t presented as a negative, extreme negative at that—”absolute worst”, “extremely poor”, “woefully inadequate”.

Overall the cluing has a freshness that imparts a real liveliness to the puzzle. Some very notable examples: 59a [Single-sex group of experts] is the portmanteau MANEL, 65a [Study __ ] SESH gives us no question mark or qualifier, 5d [“Well done, you!”] GOLD STAR, 27d [A throw] EACH.

Despite the title, the theme has nothing to do with buzzing or clicking. Instead, we have familiar phrases where one of the words is a homophone for an insect. 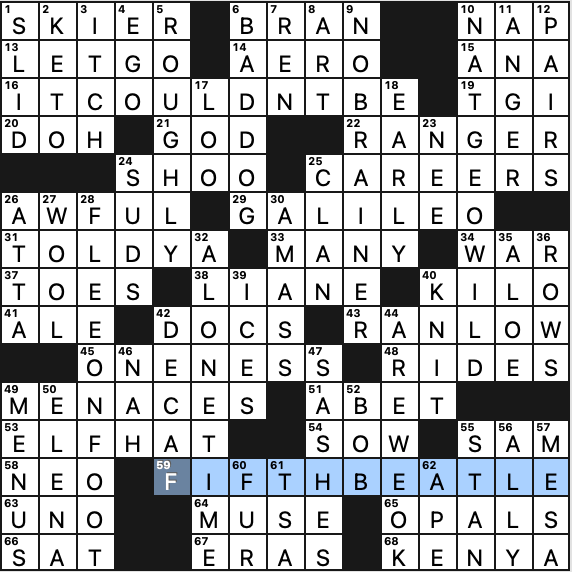 Hmm. Not my favorite Burnikel theme. For starters, in the two Across answers, the insect is the last word, so I was casting about high and low for other phrases with insect homophones at the end. It took me a while post-solve to find the two Down ones where the insect comes first. Asterisks marking the theme answers would’ve helped in this case. Second, “Beatle” is clearly already a pun on “beetle,” so it feels like an outlier. Lastly, FLEE ON FOOT feels a bit artificial; why not replace it with AUNT (somebody}? AUNT SALLY (of “order of operations” fame) could be paired with NAT TURNER.

But aside from those nits (haha) in the theme, the grid is wonderful with the likes of ALONE TIME, NO-BRAINER, “ARE WE OK?,” GALILEO, “TOLD YA!,” ELF HAT, and “BAD DOG!” I had a fun time solving the grid as a themeless.

In sum, a lovely grid, but the theme felt like a rare miss from Team Burnikel. Three stars.

Theme: Each theme answer is bookended by lettings spelling out CODE, literally breaking CODE up. 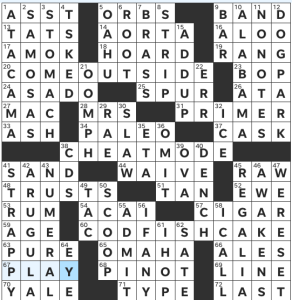 The variety in these themers were prime. They were each very different and really fun. COME OUTSIDE felt very summer-appropriate, and CHEAT MODE was extra fun, I think, since it sounded so much like CHEAT CODE (which of course would’ve been too much of a dupe to have be a themer). COD FISH CAKES threw me off since I wanted the answer to just be COD CAKES, but I got there eventually.

This grid had a really tight center that allowed for those great open corners. I loved NO NOTES, DOG PARK, and SAMOSAS especially, but the longer fill here was really stellar.

I’ve got to ADMIT that I felt a bit like a spy codebreaking throughout this puzzle. In the words of 11d [“‘It’s perfect as-is!’”] NO NOTES. 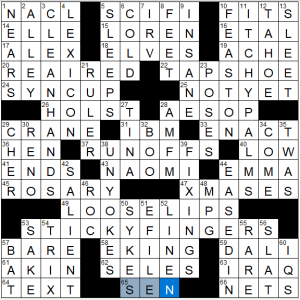 We’ve got five themers today from Peter. That in itself isn’t wildly uncommon, but I like the placement of them in this left-right symmetric grid: two long downs, two (stacked!) acrosses in the bottom, and then one broken up across two down clues in the upper middle.

Fun theme set! I’ll admit that by the end I was tired of hand-related options, but that feels a small nit to pick. The fill flowed easily for me, particularly for 74 words and five themers, but was also gentle enough that it’s possible I missed something during the solve that would have felt odd. But I don’t see anything particularly gluey now! It’s just a nice puzzle, and a nice indication that there may still be a solution for constructors when a theme set doesn’t fit nicely into rotational symmetry.

Notes:
Lots of tennis in this grid! EMMA Radacanu, Monica SELES, NAOMI Osaka. Peter is not shy to put sports in the grids. Seles and Osaka will be familiar to solvers by now from their appearance in grids if not their fame, and Emma Radacanu is a rising star for whom this is not the first nor last grid appearance.

I’m not sure I’m fully up to speed on “The Marvelous Mrs. Maisel,” but ALEX Borstein is the highlight of the show for me. I see now that she is also the voice of Lois Griffin in “Family Guy,” a show I have very little interest in.