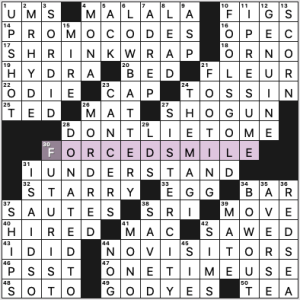 Ha, there are several religion-oriented entries in this puzzle, which struck me as funny since I’d just read this week’s Friendly Atheist newsletter (which is by Hemant). “GOD, YES,” THE MAGI, LDS, the RED SEA with a biblical clue? Wasn’t expecting that!

I like the drama that plays out in the central stack:

Generally I’m not a fan of including multiple “I” quotes in a grid, but I didn’t notice the overlap while solving. There are four, though! I DID, I SAID SO, and I PRESUME along with 31a. How do you folks feel about such repeats? 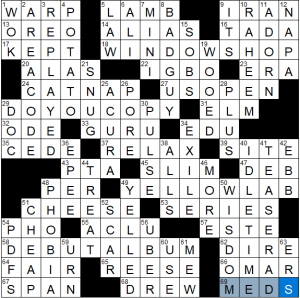 Our themers today end with words that go with “photo”:

At first, I read these as “SHOP Photo,” “COPY photo,” etc, and that made enough sense to me. But PhotoSHOP, photoCOPY, photoLAB, and photo ALBUM are an even better set, and certainly the way Rafa intended. Love that CHEESE [51a Paneer or brie, e.g.] made it in!

Rafa has a particular skill at fitting tons of current and noteworthy bits of news and pop culture into his grids. I love learning from puzzles, and it’s extremely rare that I know everything in a grid. This is particularly true in the USA Today, which constantly broadens my horizons, but today Rafa presents tons of fill and cluing angles to make a puzzle that is (IMO) both atypical of many large-publication grids in its concentration of current names and proper nouns and also utterly accessible at every turn.

Your mileage may (likely will) vary, but a smattering: Serena Williams, Sappho, DEB Haaland (the second Native American to serve in the Cabinet), REESE Witherspoon, OMAR Sy (the first Black recipient of the Cesar Award for Best Actor), and Mahershala ALI.

(There’s also young English soccer superstar RAHEEM Sterling, who is noteworthy and admirable but for whom I will not be cheering this winter when the US plays England in the World Cup.)

Thanks, Rafa! Have a good weekend, all! 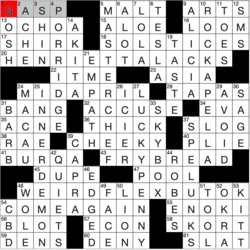 So…I love putting some interesting trivia into a puzzle as much as anyone, and I love learning something new during a solve. Trouble is, sometimes when there’s a decent amount of trivia in a solve, it either knocks out people who don’t know any of it, or makes what is supposed to be a somewhat challenging solve very easy for people who do. So I do think it’s appropriate for tournament organizers, say, to push for a minimum of trivia overall in a final puzzle, or at least to balance trivia knowledge categories so that the tournament isn’t won or lost based on who happens to have the same knowledge base as the constructor.

That being said, this isn’t a tournament puzzle, so I’m just whining about this puzzle feeling more like an easy trivia quiz than a Saturday solve because the trivia happens to be in my wheelhouse:

This is not to say that there wasn’t any fun wordplay in this puzzle, just that the long answers being easy trivia gets meant that sometimes I didn’t see the best clues until after I was done solving and looked over the puzzle again. A few to point out: 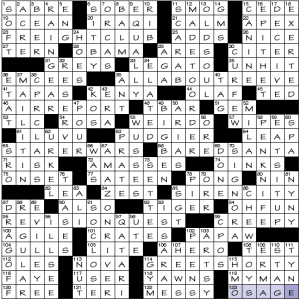 Had an obligation that took up all morning and more, so just the bare minimum for the Wall Street Journal and Saturday Stumper write-ups today. I leave it to the readers and commenters to generate their own discussions.

Theme here is inserting the bigram RE into film titles. 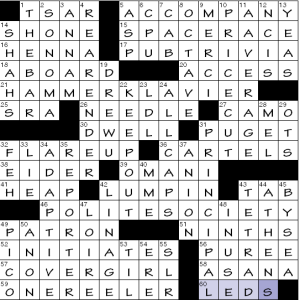 Surprisingly easy Stumper today. No missteps, although there were some pauses and impediments.