Do you ever see a byline and just know it’s going to be a stunner of a puzzle? That was my feeling when I saw our co-constructors’ names today, and I was so pleased to be right! Wowwwww. 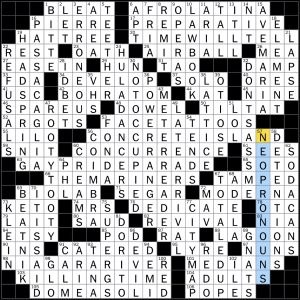 It’s tough to do a themeless well, much less one this open and with so many incredible long entries. Bravo to the pair! What a smooth grid, indeed. Perhaps the only square I truly had trouble with was at the crossing of ARGOTS and PASSACAGLIA, but I was glad to learn of both entries and intuited the G correctly.

Here were some of my favorite of the longer entries:

– 6A: AFROLATINA [Singer Celia Cruz or actress Rosie Perez]
– 20A: TIME WILL TELL [“We must wait to see what happens”]
– 53A: FACE TATTOOS [Indicators of status in Maori culture]
– 63A: GAY PRIDE PARADE [Where many people walk out?]
– 105A: DO ME A SOLID [Informal favor request]
– 32D: DONT SASS ME [“That’s enough lip out of you!”]
– 36D: POWER RANGER [“Mighty Morphin” TV character]
– 43D: METER READER [Utility company professional]
– 47D: ROOTY TOOTY [Descriptor for IHOP’s Fresh ‘N Fruity pancakes]
– 57D: NEOPRONOUNS [They don’t express gender] – What are NEOPRONOUNS, you ask? Read up on them here!

And some of my other favorite clues:

A super joyful solving experience and #constructorgoals feelings from someone who only wishes they could build puzzles that play this smoothly. I hope you enjoyed it, too. In the comments, let us know your favorite entries! 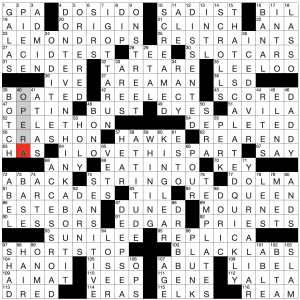 My favorite kind of themeless is one where I feel like I don’t know any of the clues. And somehow, it all fits together eventually. For me, that is almost always the case with Patrick Berry “difficult” themeless puzzles. But this had that exact same feel today. It’s interesting how knowing the constructor’s work influences how I feel during the solve, however. What I mean is that I *know* that when I’m solving a Berry or a Birnholz puzzle that it will come together, and it will be satisfying. So when I pass through the clues the first time and can only confidently enter a small handful of answers, not only is that a good thing. It’s great. I can’t say I would feel the same if I didn’t trust the constructor.

Not a heckuva lot of unfamiliar stuff. All fairly crossed and fun to figure out. Here’s a partial list of new ones for me after a quick scan of the completed grid: Cornelius DREBBEL, SUNI LEE (I just looked her up… looks like her full first name is SUNISA), DOLMA, AVILA, ESTEBAN Ocon (took me a while to see, despite my nephew’s name being ESTEBAN).

The only clue I grimaced at was [___ of passage]. Of course I wanted RITE, but I didn’t enter it because it was calling for five letters. It took me a while before I convinced myself it was RITES. I think it’s a bit deceiving of fill-in-the-blank entries to mess around with plurals.

The BOATED/OPT IN/CRASH ON/HAS/TELETHON/ODDITIES area fell last for me and took a lot of elbow grease. I’m still having trouble seeing HAS as a perfect substitute for [Isn’t missing]. Oh wait… it works in this sense: “He isn’t missing his keys” “He has his keys” Ok. That makes sense now. I was thinking along the lines of “The dog isn’t missing…” “The dog… has?”

Other things of note:

Theme: The letter S is added to certain words in familiar phrases to wacky effect. 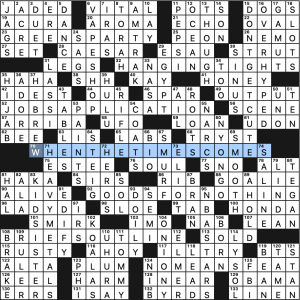 I feel like adding an S to words is the low-hanging fruit of add-a-letter themes, so this didn’t do a lot for me. And I tried and failed to make sense of “the mix” in the title. I wanted there to be some other constraint to tighten the theme, but it seems there isn’t one.

The theme lost me with WHEN THE TIMES COMES, which feels awkward (it’s an adverbial phrase and all the other entries are noun phrases), and its clue is ungainly. There have to be dozens of phrases with “time” in them that would lend themselves to a humorous change. How about “Stop wasting my Times” or “It’s my Times to shine!”?

All that said, the puzzle is consistent. Each word changes meaning by the addition of an S; it’s obviously not about making words plural. And with the exception of the entry above, the other base phrases are at least solid, if not fun.

The long fill is definitely fun with the likes of “DON’T GET CUTE,” HEAVY METALS (as on the periodic table), KID SISTER, and OVERHYPED. Both VAPE SHOP and NBA STARS feel a bit green-painty, but they aren’t so bad. The latter is definitely better than the oft-seen NBAERS. And there are some enjoyable sixes as well, like “ARRIBA!,” “I’LL TRY,” LADY DI, and Lupita NYONGO (whose name is just fun to say). 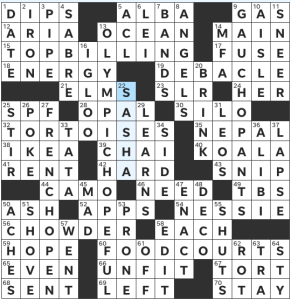 On top of the themers, we got a few Across answers that felt like they could’ve been themers in another life, with TOP BILLING and FOOD COURTS at 15a and 60a respectively. It was also entertaining to see a few creatures swim through this grid, with TORTOISES, NESSIE, and KOALA both featured prominently in the center. 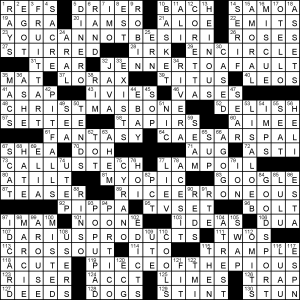 “We’ve Moved” by Samuel A. Donaldson & Doug Peterson features a couple of less-seen theme wrinkle. For one, the “US” referred to by “We” in “We’ve Moved” is more precisely the sound “əs”. This is removed to the phrases in the first half of the grid, but in the second half the sound is added. In all cases, it is a sound addition / subtraction rather than a letter one, and spellings are adjusted as needed. This is requires a lot more imagination IMO. The downside, as always, is if you don’t pronounce the words the same the answers tend to fall rather flat.