This week we’re looking for a six-letter word. A six-letter answer often leads to six theme entries and the long horizontal entries provided six candidates. Mike is famous for using the central and/or final horizontal grid entries as part of the meta and the central entry ABUSERS (clued as “They’ll walk all over you”) struck me as thematic. I pondered different ways to parse “Position Statement,” leading to the following dead rabbit holes:

The title/rank rabbit hole was too disjointed, so I abandoned it. I spun my wheels and kept looking at ABUSERS, noting the positional preposition “over” in the clue. I scanned the other potential themers: four of the six long entries also contained positional prepositions. I knew I had the right rabbit hole when I noticed the theme clues also contained homophones of letters: 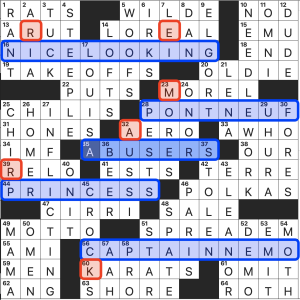 Five themers, and we needed six letters. NICELOOKING provided two: R and E were on the I’s. M was over the O in PONTNEUF, A was over the U in ABUSERS, R was on a P in PRINCESS, and K was under the C in CAPTAINNEMO. The letters above/below the theme entry letters spell REMARK, our contest solution. Mike’s on a roll; I loved the “aha”moment. Solvers: let me me know what you thought, and how you found the path to the right rabbit hole.