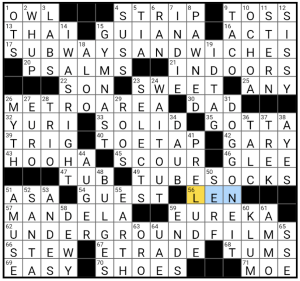 Theme: The first word of each theme answer is a name for the subway.

Cute theme! I’m a noted public transit lover so this was an easy theme for me to like. It’s impressive how many words we have for these type of transit – in Seattle we have the light rail, which wouldn’t have really worked for this puzzle. A few of the clues were a little strange to me: Are TUBE SOCKS really one size fits all? I had also heard of “Eraserhead” but not “Pink Flamingos” so I had to get that from context.

I don’t have many comments on the fill today – it was very smooth and Monday friendly, no crosses that seemed unfair.

Theme: CAN OPENER (59a, [Soup preparer’s need, and a hint to the starts of the starred answers]). Theme answers are familiar phrases whose first words might “open” for (i.e. precede) “can.” (By the way, I’ve made my share of soup from cans, but I’d still prefer it if the clue had a “perhaps” in there to indicate not all soups come from cans. Oh, and don’t most soup cans have pop tops these days, anyway?) 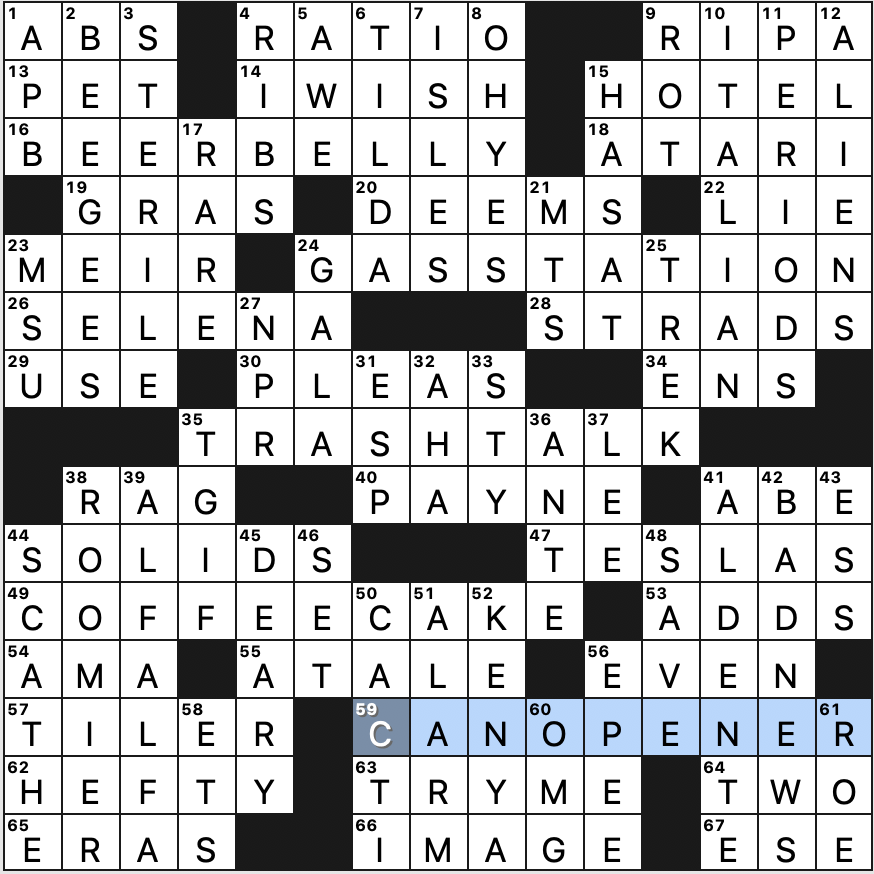 My laptop battery’s at 12%. Gotta make this quick.

Fortunately for me, this is a perfect example of a Monday grid: an easy-t0-grasp theme and smooth fill. Theme answers were fun and lively though I still needed the revealer to put it all together. The solve proceeded smoothly through to the end.

It’s a challenge to construct a grid with a nine-letter central entry, but it’s handled well here. Unfortunately, the grid gets bisected meaning we don’t get any juicy long entries, but with such smooth fill I hardly noticed. I enjoyed the BEE GEES, “OH YES,” ALFALFA, AL DENTE, “TRY ME,” and even BAD NEWS. The iffiest entry I spotted was the partial A TALE, but it was quickly gotten past. 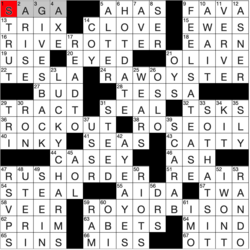 OK, I know I’m the reviewer here, but please tell me how to feel about this puzzle. On the one hand, there’s lots of thematic material — six entries! They’re explained by the revealer at 53D [Total stranger, or a three-word hint to the answers to the starred clues], which is RANDO. Split that into R AND O, and you see that the theme answers are two-word phrases whose initials are RO:

So, some nice, evocative theme entries, and a lot of them. The reason I don’t know how to feel is that there are four long Down entries that are longer than the two central themers (and the two longest are longer than any of the themers). Even with the stars, that contributed to this solve being quite a bit longer than the usual Monday for me (particularly when I had realized that each theme entry begins with R, hadn’t noticed the O commonality, and therefore thought that FEELS AT EASE at 9D should be RESTS AT EASE). In fact, I just noticed that the difference between my solve time on this past Saturday’s puzzle and today’s was only four seconds!

In the end, I think I’ll go with “nice puzzle that could’ve been midweek,” or maybe that needed a black square breaking up the 11-letter nontheme entries, as much as I like LUCKY CHARMS. 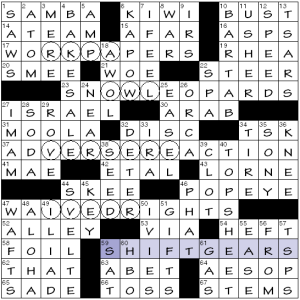 Let’s go for a spin.

I note that these are not in order—reverse and low would be transposed—and not complete, as neutral is absent, although it’s arguable that it isn’t a gear per se. I’ll also note that the title seems inapt to me, as ‘stick’ generally connotes a manual transmission. Automatic transmissions often have stick-like controllers, but they’re called ‘shifters’ to differentiate them from stick shift vehicles.

Despite some minor failings in my opinion, this is a solid crossword. I still prefer manual transmissions, but they admittedly make for a less interesting crossword theme.

hey besties, today’s puzzle is a DEBUT from rena. everyone say “congratulations, rena” in the comments!!! 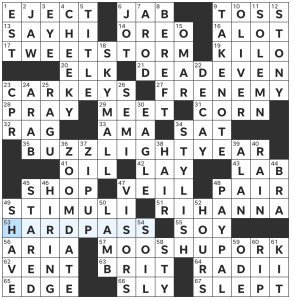 the title is not a phrase i am aware of, maybe it’s not a common phrase at all and it just has nice alliteration? let me know. in any case, it refers to the sounds animals make, which kick off each of the three answers. we’ve got TWEET STORM, BUZZ LIGHTYEAR, and MOOSHU PORK.

also, check out these TEN juicy seven- and eight-letter words that we’ve got! DEAD EVEN, CAR KEYS, FRENEMY, STIMULI, RIHANNA, HARD PASS, TAKE NOTE, SKY MALL, ZOOM DATE!! that is a wild amount of non-theme content (i actually went back to recount, since it seemed like so much) and so much of it is sparkly stuff.

other things to note: 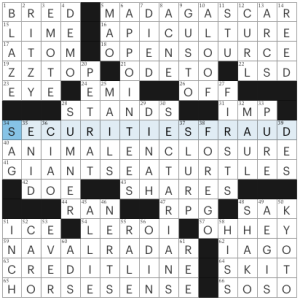 It’s always a treat to have a KAC themeless, but I was expecting the clues to be harder! I feel cheated out of 20% of the mental effort I was prepared to expend. Kameron doesn’t usually gravitate towards 72-word grids, but I’m guessing that the triple-stacked 15s nudged towards having a lot of short fill in the mix. I used to love triple-stacks, but my ardor for them has cooled in the last several years. 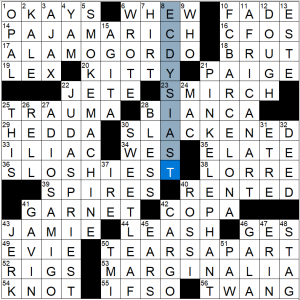 This was a bit of a doozy, no? Traps galore, two sets of triple-staggerstacked long answers, and more long stuff into the middle and in the corners. Not many opportunities for footholds here.

I actually finished the puzzle unsure if I was correct, before looking up ECDYSIAST [8d One in a pole position?]. Apparently this is a word for a striptease performer coined by H.L. Mencken. I’m unfamiliar, but if any commenters are more familiar with pole dancing or strip teases, they can weigh in on the obscurity (or not) of this word.

Other than that, I thought the long stuff was nicely flavorful. Soccer club FC BARCELONA clued to its stadium, the Camp Nou, is a bit trivia-y, but they are one of the richest and most famous sports teams in the world. PAJAMA RICH [14a So loaded that you don’t have to dress up for work] is a coinage I first heard before COVID vaccines were available, pointing out the disparities between folks in careers who could afford to continue to isolate and social distance several months in, and those who had little choice but to return to their jobs and attendant health risks.

There are quite a few names in the grid, from a variety of knowledge bases: activist BIANCA Jagger and actor WES Bentley each cross that ECDYSIAST entry and are new to me, as is Jody RELL. Mythbuster JAMIE Hyneman, 9-time MotoGP World Champion Valentino ROSSI, New England Patriots quarterback MAC Jones, and actress PAIGE O’Hara cover pretty broad ground as well. A tough but ultimately manageable grid IMO.