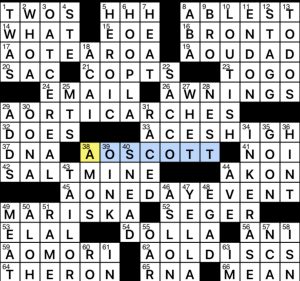 Hello lovelies! Quick writeup this week as I’m away on vacation! This week’s theme is words and phrases that start with the letters AO.

I’m going to stop here because it’s time to drive to Maine. Until next week!

Theme: PORK WRAPS (57a, [Greek or Asian meat offerings, or a description of the circled answers]). The other theme answers are familiar phrases whose outer letters spell out a type of swine. (When I think of Greek food, I don’t think of pork, but maybe that’s just me.) 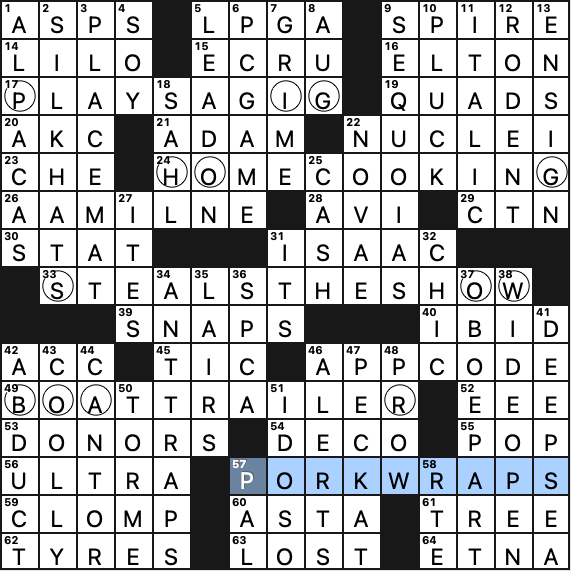 The theme is fine and it works. It certainly helped me fill in the circled letters of 49a since I already knew what those would be. But I have questions.

Right off the bat, I see that three of the “hidden words” are three-letters long, which means the theme is pretty loose; there are a lot of phrases that hide HO_G, for example. But HOME COOKING is a great entry. Not so much PLAYS A GIG, though. Why not something less roll-your-owny like PINKY RING?

Further, trying to work with a central entry that’s not 7- or 15-letters long is challenging. Since the theme is loose enough, why not pick an entry that’s a helpful length like STEALING THE SHOW or SCHOOL BUS YELLOW or SHAMWOW?

That 13-letter central entry forces big corners. The NW is nice with ALPACAS, SILK HATS, and PLACEMAT. And the SE features WIDE OPEN and DEEP SEA, which is a great pairing. But OBOE PART and APP CODE feel too green painty, especially for such long entries.

The other two corners are solid with SEQUOIAS and ANT TRAPS and only a couple abbreviations (CTN and ACC).

Clue of note: 5d. [Seduce]. LEAD ON. I don’t quite equate these. To me, LEAD ON implies some element of deception whereas “seduce” does not necessarily. Anyway, this entry would be more fun clued as the colloquial phrase, perhaps with the clue [“After you”].

The theme works, and there are some lovely bits of fill, but there are also significant ways in which the grid could be improved. 3.25 stars. 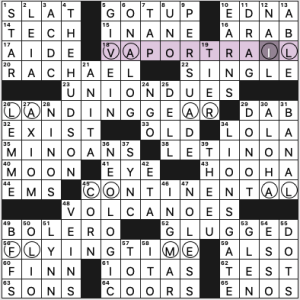 A nice debut from Trey Mendez, with a geographic/aviation mashup theme. Each themer is a flight-related term that starts and ends with postal abbreviations of the states whose cities appear in its clue:

It took me a while to grasp what was going on with the theme. Did it feel Wednesdayish to you? Not sure if it was my mistyping spree that slowed me down, or theme difficulty.

There was a lot of pop culture in the puzzle, no? I always like that. And lots of proper nouns. I count about 18 propers, which means the crowd that grumbles every. single. time there are are a lot of names is feeling put out by the “trivia.” I mean, we know they’re all fine with BOLERO and INGMAR Bergman, but they’ll complain about the pop culture propers. (You know who we don’t hear from about puzzles with lots of names? All the rest of us who don’t consider pop culture to be beneath our notice.) 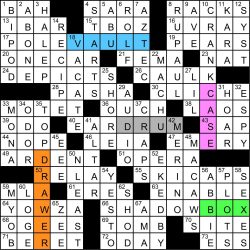 Good day, everyone! The last full week of August is here! My word! Here is hoping you’re all doing well and finalizing/executing those late summer plans before it’s time to think about cool, crisp breezes and carving pumpkins.

We have some fun with common phrases/nouns with today’s grid, and those expressions are reimagined in the cluing so that the final word of the answers, which also happens to be synonyms for a container, actually is used in reference to a container.

Of all things, I liked that BIPOD got some love, for the sole fact that all I see in my field (broadcasting) are monopods and tripods, and I own a pair of each that I can take out onto the field when doing stand-ups (1D: [Two-legged support]). I think it was in crosswords that helped me realize that both ROLFing was a thing and that it is an eponym (6D: [Deep-tissue bodywork pioneer Ida]). With the US Open tennis tournament around the corner, very timely to have HALEP in the grid, a woman who just won a US Open warm-up tournament in Toronto earlier this month (3D: [2018 French Open winner Simona]). In 2016, Halep won the same event in a different Canadian city, Montréal, and, from what I saw, a lucky journalist got the chance to do a one-on-one interview with her soon after. I wonder who that person was?!?

“Sports will make you smarter” moment of the day: SEXES (58D: [“Battle of the ___” (Billie Jean King/Bobby Riggs tennis showdown where King won]) – How about presenting today’s “sports…smarter” subject in trivia form?! Let’s go! Here are a few questions, and if you answer three out of the four correct, then you’re a true tennis historian and/or older than you want to admit! Here goes!

1.) What city and/or arena did the “Battle of the Sexes” match take place?

2.) What was the final score of the match?

3.) The name/logo of which brand of candy was emblazoned on Riggs’ outfit upon entering the arena before the match against King?

I always smile when I see Stella’s byline on a puzzle. I prefer her harder ones, of course (even when they crack my head open) but an easy-ish Stella is still a good puzzle. This one is no exception.

The theme answers are all a little rank. 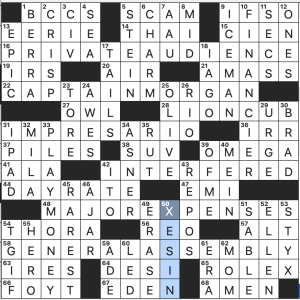 PRIVATE, CAPTAIN, MAJOR, GENERAL marching in order down the grid with two 15s thrown in for good measure. All four are solid entries and it’s a totally Tuesday-appropriate theme. Nice.

What I didn’t know before I did this puzzle: that CIEN is Spanish for “hundred.” 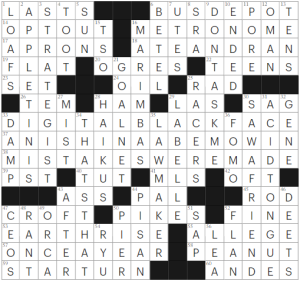 Stack of triple-sixteens in the center. Yep, you read that right—sixteens. That’s to accommodate what I presume is the seed entry, the wholly unfamiliar to me (and mightily impressive) ANISHINAABEMOWIN, 37a [Language in which “boozhoo” is a greeting]. It’s the Ojibwe language, and Chrome’s built-in spellchecker does not flag it as I’m recording it here, so that’s kind of impressive and inclusive, Unrelated anecdote: “[Wilson Anthony “Boozoo”] Chavis was born in Church Point, Louisiana to parents Arthur and Marceline Chavis in a Cajun Creole settlement called Pied des Chiens (Dog Hill), and was the son of tenant farmers. He acquired the nickname ‘Boozoo’ in his childhood, although the origin of the nickname is unknown. When asked by a reporter about his nickname, Chavis replied ‘Man, I hate that question’.” (Wikipedia)

Above and below ANISHINAABEMOWIN are 33a [Modern-day form of minstrelsy] DIGITAL BLACKFACE (there’s a primer with several links here on Wikipedia) and 38a [Phrase in the “past exonerative” tense, per the political commentator Bill Schneider] 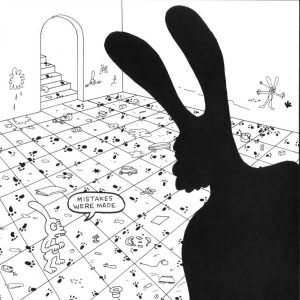 MISTAKES WERE MADE. Yep, there’s a Wikipedia page for that one.

Additionally, the grid is populated with some, yes, sparkly entries, such as EARTHRISE, STAR TURN, DON’T ASK ME, METRONOME, MARIMBAS, and more.

A solid workout, and to reiterate: I needed every single crossing for that Ojibwe (wait, the spellchecker flags that?!) word.

Appears to be a debut from Dylan Merrill today! I really want to know if there’s any relation to Patrick… 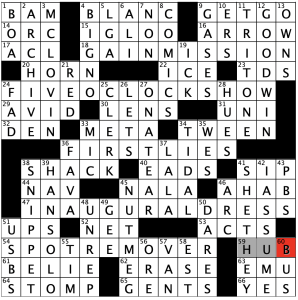 Fun one! I liked the bit of time it took for me to figure out a couple of the base phrases after filling in the wackified entry. FIVE O’CLOCK SHOW being my favorite of the bunch as I was trying to figure out the spot from whence came AD (I figured AD would be dropped from the starts of words based on the first entry I uncovered, GAIN MISSION.

And a nice revealer at the end, though I think I would’ve preferred one more entry like the others instead. Sometimes with titled puzzles, you end up with two revealers, as is the case here.

This puzzle also highlights a nit I bring up from time to time. It features two similar clues, one I think is fun and clever, and the other which feels random and lazy. They are:

14A [Monster within “armor–clad”] ORC and [Name hidden in “narrow escape”] WES. The former I think is clever! An ORC is often armor-clad, so the clue is very apt. The latter just baffles me. WES can be found in a boatload of phrases. Why this one? Is it WES related somehow? For a moment I thought WES Craven may have made a movie by that title or something. But no. Just a random phrase as far as I can tell.

All in all, I really enjoyed this one.

Also, a TRITONE is one of my favorite sounds (contextually). Glad to see it in the puzzle! And MCLOVIN never not be a great entry.

Fantastic puzzle today with an excellent theme, a wide-ranging themer set, and an incredible grid! 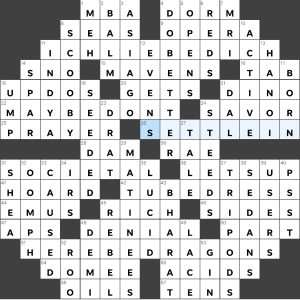 Given today’s title, I was expecting to find different types of beds among the themer set but instead they all literally share a BED. Needed multiple crossings today for ICHLIEBEDICH but only a couple for MAYBEDONT and TUBEDRESS while HEREBEDRAGONS filled right in. With such variety among them, the title and theme are even more humorous to me. Such fun!

Stumpers: LUCID (needed a couple of crossings), OOMPH (needed crossings), and DOBETTER (stuck on “don’t” or “do not” but those clearly weren’t it so took me a while to get it)

The top half filled in piecemeal for me, but the bottom half I really slowed. When I started on the downs, more began to fill in but it was steady progress and felt like a smooth solve through it took me a good amount of time to complete. My time surprised me today because it felt closer to 8-9 minutes, which I attribute to the great fill and cluing. Everything was fairly crossed, even with some entries and clues being unfamiliar to me. Also, shoutout to the amazing grid—just wow!