We have a fun play on words today that I haven’t seen before. The revealer is DUBLIN (64a, [Capital that’s a phonetic hint to the first words of 20-, 33-, 40- and 52-Across]). The other theme entries are familiar phrases whose first words are homophones of the numbers 1, 2, 4, and 8, respectively, and each number is double the previous number (ergo, “DUBLIN”). Cute! 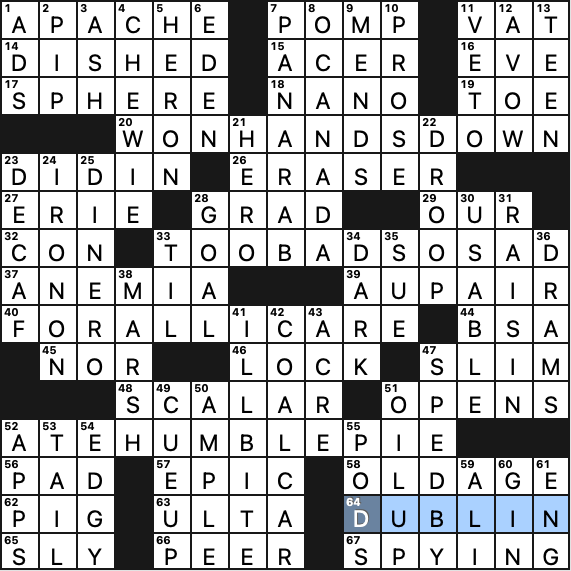 What a fun set of entries, though I couldn’t see the theme before I hit the revealer. And even then my brain skipped a beat before the aha moment kicked in. Very enjoyable in an unexpected way.

In the fill I liked “I’LL BITE,” COAL CAR, PAN-ARAB, “O CANADA,” and starting the grid off with APACHE (clued [Geronimo, e.g.]). With only four main theme answers, it seems like there should be room for a couple longer, more sparkly entries, but maybe having that fifth theme answer/revealer (and it being an awkward six letters in length) stymied David’s efforts. All told though, the fill is pleasantly smooth. 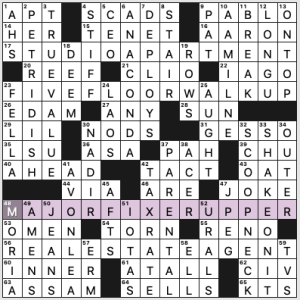 Today’s theme has a hardcore NYC vibe thanks to 23a, which isn’t a term of art here in Chicago. The theme is a REAL ESTATE AGENT‘s euphemisms:

If this theme had run in one of the puzzle venues like the Wall Street Journal or Universal, it could have had a title rather than a 15-letter revealer. Or the theme clues could have been lengthened with something like “the real estate agent claimed.” The fill might have benefited from having 45 theme squares rather than 60, and a lot more breathing room. I’m never too entertained by CLIO, EDAM (too hard to find in convenient sliced form in the US!), PAH, CIV. engr., ASSAM, KTS (can you actually pluralize that abbreviation for karat? it’s a measurement of purity, and you do not get 24 karats of gold, you get 24-karat gold), plural interjection AHS, plural abbrev AFTS, an ELL, and the URALS. I know plenty of long-time solvers accept this stuff as par for the course, but I pity a newer solver who gets all this thrown at them in a single puzzle. 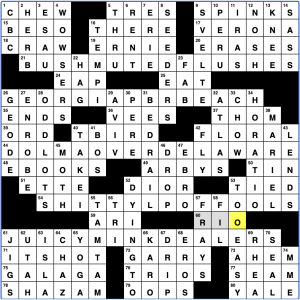 BEQ’s got today’s AVCX, and today’s theme entries get some letters, as the title suggests:

Each of these entries has a commonly-used internet abbreviation inserted into it to created the clued phrase:

Here are Beto y Enrique (aka Bert and ERNIE, 19A), in all their Plaza Sesamo glory. 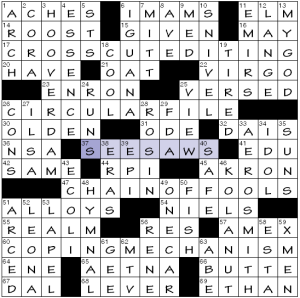 Good find for a theme here.

Crosscut saw, circular saw, chainsaw, coping saw, and they all begin with the letter C. Isn’t that nifty?

The fill and cluing are solid but not super-interesting, so I won’t be listing much here. 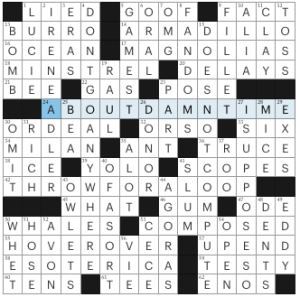 Interesting grid layout, with those two Across 13s forming a lattice with the two Down 14s. All four of those entries are terrific: Lizzo’s ABOUT DAMN TIME, THROW FOR A LOOP, DON’T GO ANYWHERE, DOES NOT COMPUTE.

Other nice bits: ARMADILLO (what a fun clue: [Animal with “screaming hairy” and “pink fairy” species]), HOVER OVER, IRENE ADLER, FANDOMS, I SUPPOSE SO.

Not sure anyone really has use for the superlative GAMEST. 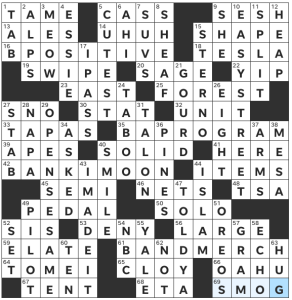 I haven’t seen this theme type from USA Today in a long time, possibly ever, so it was a nice change of pace! I liked the clue on B POSITIVE, which made the answer much more specific and fun. Do people actually say BA PROGRAM? I’ve heard of master’s programs and PhD programs, but as someone with a BA, I don’t recall it being referred to in that way. Also, because I didn’t see the theme until I completed the puzzle, I had “tour merch” instead of BAND MERCH for a while.

Favorite fill: OPEN SESAME, I MADE IT, TOLD YA, EASY STREET (although I really wish it had an “Annie” clue!)

Favorite clues: 52a [Lilo, to Nani, for short] for SIS (A “Lilo and Stitch” reference), 24d [ Chinese culture, gifting someone a clock is one] for TABOO, 9a [Word after “jam” or “makeout”] for SESH – also vaguely thematic for the puzzle! 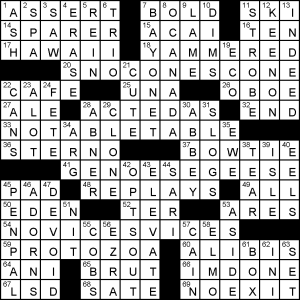 I figured David Alfred Bywaters’s theme out long before I got to the revealer: Sartre’s [“Find another way out” sign and a feature of four answers in this puzzle], NOEXIT. In part, it therefore wasn’t the most satisfying of revealers, especially as it doesn’t quite tie everything up. Each theme answer consists of a word pair with the second part of each being formed by NO exiting from the first. The pair itself is then clued “wacky style”: