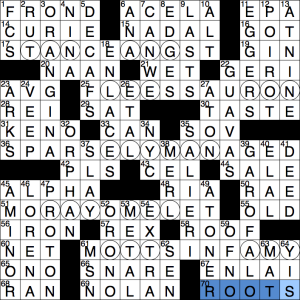 hello and welcome to episode #742 of matt gaffney’s weekly crossword contest, “Chain Gang”. for this week 3 puzzle, matt challenges us to find an infamous American of the 20th and 21st centuries. all right, what are the theme answers? there are five long answers in the grid, each of which is a made-up two-word phrase:

what do these answers have in common? i have no idea. maybe nothing. i looked at the initials (SA, FS, SM, MO, MI) and didn’t notice anything striking. i looked for hidden words, backwards and forwards. i think there’s nothing here, at least not yet.

so where to now? the title suggests a chain ordering mechanism, but we don’t yet know what to order. i think the answer has to be in the fill—there ought to be five or even ten more theme answers lurking in the fill, and we’re supposed to connect them to the long themers somehow.

so, how to find these other hidden theme answers? my eye was certainly drawn to some clues that look like they were written so as to provide intentional ambiguity:

can we figure out anything to do with any of these? okay, i see something. MEL is inside OMELET, and OTT is inside MOTT’S. that’s promising. LEE is inside FLEES, so perhaps ang LEE has two best picture nominations this century. looking it up… well, maybe. life of pi, definitely. his other best pict nom is crouching tiger, hidden dragon which was from 2000. that’s last century, but the oscar nominations for that year were announced in early 2001, so … maybe? i’ll pencil that in.

STANCE ANGST really only has TAN as a substring that looks like a valid crossword entry in its own right. i didn’t see any clues that could clue the color TAN, but {Noted San Francisco Bay-area novelist} EGGERS could definitely clue amy TAN, so i think that’s a match.

what about SPARSELY MANAGED? the hidden word would have to be PAR, PARS, PARSE, NAG, or AGE, i think. (ARS, SEL and ANA are possible, but less good. well, ANA itself is already in the grid, so definitely not that.) i guess AGED could match {Ancient} OLD, although in all of the other cases, the hidden word appears in the interior of the word rather than the beginning or end. it’s also the only four-letter hidden word. but i can’t find anything else.

all right, time to take stock. here’s what we’ve found so far:

so, what now? and in particular, what are we doing with the rest of the theme answer? there’s one word in each that’s so far entirely unused: ANGST, SAURON, SPARSELY, MORAY, and INFAMY. there’s also the extra letters in the container word; i suspect we won’t be using those, just due to their being so constrained, but maybe.

hmm, AGED is looking more and more like an outlier. it’s four letters instead of three; it’s not in the middle of the word; and it’s not a person’s name. those all make it different from the other hidden themers. i think we need to find another three-letter celebrity, probably one who matches {TV star who appeared in several “The Love Boat” episodes in the 1980s} RAE or {Artist who was the subject of one of Andy Warhol’s famous “Polaroid Portraits”} ONO. but those clues feel generic enough that they are hard to forward-solve for the missing celebrity.

oh, how about this: ANGST contains ANG, the first name of LEE. this has to be right—it’s a link in the chain suggested by the title. MEL and OTT are just there already. INFAMY contains AMY which links back to TAN. i guess SAURON contains RON, so… RON ELY? ELY is in SPARSELY, and i bet he was in the love boat, and/or photographed by andy warhol. it must be the love boat, because MAN / RAY is the artist (himself a photographer) who ties into the warhol clue.

okay, so this is a whole bunch of celebrities whose first and last names both have three letters (and as such, are frequent crossword fodder):

that’s the chain, all right. so what’s the answer? i … actually don’t know. i’d love to use the letters in the names:

i just don’t see how we’re supposed to spell something from those, though. it could just be “think of another (3, 3) person who’s an infamous 20th/21st-century american”, but nobody is coming to mind. (POL POT comes close, but he’s not american and he died before 2000.)

ok, perhaps we’re supposed to use the answers to the extra clues:

the first letters of those other clues spell out ENRON. ohhhh, okay, it’s disgraced enron executive KEN LAY. i wouldn’t have thought of him because it’s often (usually?) kenneth, but he definitely fits the prompt, and he did live into the 21st century.

whew, that was a workout. but i feel i was slow to grasp the key features of the puzzle, and maybe it was more obvious to look for both halves of the relevant names. in particular, the fact that MEL and OTT were both staring me in the face should have had me thinking harder. although i think the MEL thing was coincidence, since GERI was not otherwise used in the theme—none of the other first names (AMY, ANG, RON, or MAN) were double-clued in the fill.

but hey, i got there, and it was ultimately very satisfying. how’d you fare on this one?