Let’s start with the title. In filmmaking, a jump cut is when a segment of a continuous scene is cut out and the action of the film appears to “jump” from one part of the scene to a future part of the scene, thus giving the film a certain amount of energy. You see this a lot in montages where there are multiple jump cuts in a row. (Here’s an example.)

In today’s puzzle, each theme answer “jumps” across a block to a separate entry. The longer entry clues the entire row (both entries) while the shorter entry is a word that can be a synonym of “cut.” 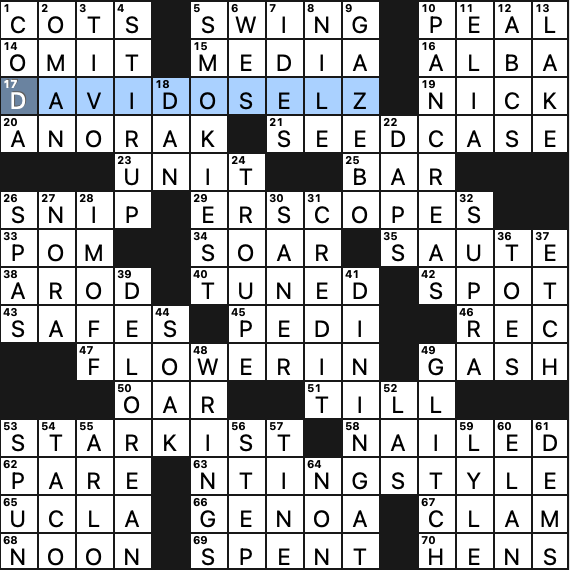 Longtime WSJ solvers will recognize this type of theme as one of editor Mike Shenk’s mainstays. It feels like it’s been a while since we’ve seen one, but when I read the title, I thought this might be what was going on.

I wouldn’t say I love this theme type, but it works, especially in this case with a good title. I did have a hard time with FLOWERING ASH since I’d never heard of it, and I had to rely on some really musty gray cells to pull out DAVID O. SELZNICK, especially that S crossing another proper name, WES Studi. (But I appreciate this Cherokee actor being given some puzzle time. You may also have seen him in The Last of the Mohicans and Mystery Men.)

Top fill: DELOREAN, PANCREAS, GLITCH, GAZEBO, and STARKIST. (Aside: We have a Sunkist brand and a STARKIST brand; why is there no Moonkist brand?) 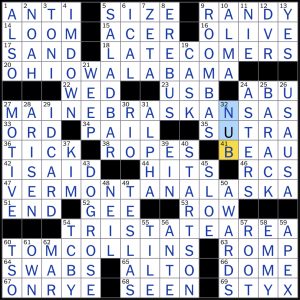 There was a nice sense of an “aha” once I got the revealer on today’s NYT from Olivia Mitra Framke and Andrea Carla Michaels :

We’ve got three TRI-STATE AREAs – OHIO-IOWA-ALABAMA, MAINE-NEBRASKA-KANSAS, and VERMONT-MONTANA-ALASKA, all set up to overlap on top of one another

Sara Cantor’s USA Today Crossword, “One Plus One” — Sophia’s recap 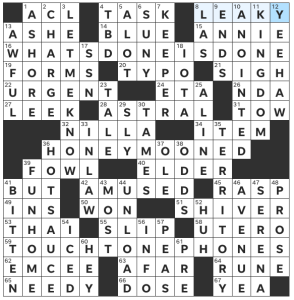 If yesterday’s puzzle was about group theory, today’s deals with some much simpler math. I really like the theme answers Sara chose here, particularly the grid spanning ones. They all do an effective job of concealing the “ones”, especially the latter two answers where the one is not in a repeated word.

I’ve heard from USA Today constructors that the reason symmetry isn’t required is because of the high standards for fill. Today’s puzzle has both great fill and maintains its symmetry. Impressive stuff. Some random fill/clue thoughts:

THEME: Synonyms for “girl” can be found at the beginnings and ends of common phrases when combined. 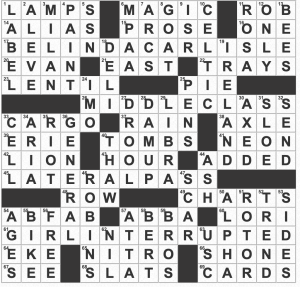 A fine, simple, and clean idea here. Unfortunately it suffers from Universal’s inability to utilize the basic, common practice of circling letters to draw solvers’ attention to the correct area, so instead they are asked to interpret instructions like this: [Lead singer of the Go-Go’s (In this answer, note the first 3 letters + the last 2)] then later this [Bourgeois (first 2 letters + last 2)]. I have personally witnessed new solvers interpret instructions like this independently with a 0% success rate. It may seem simple to seasoned solvers, but those instructions are very confusing to newer ones, for whom the Universal puzzle should be accessible. Bummer that he unique-to-Universal “count the letters” concept is still being practiced by the self-proclaimed “[setter of] standards for all daily crosswords.”

Of course, while David is kind enough to give us a “proper” version at this site, the practice of offering a second version appeases the crowd that would be most likely to write to Andrews McMeel with the suggestion that they update their software and bring it out of the late 90s. The masses who solve on paper or on the webapp get confusing directions, and new solvers are left “unhooked” as they feel that the directions are above their heads (from my first-hand experience).

Anyway, the puzzle itself is just fine. Everything here was pretty much over the plate! Nothing to really dislike. Not a lot of longer fill entries, so I was hoping the longer entries would have a lot of zing to them. These ones do the job, but it never felt “lively” to me.

I did enjoy the revealer, and my favorite fun fact was that the MPAA was renamed in 2019. Who knew? Now it’s MPA. They lost an A. Go figure.

3 stars from me with circles.

Note: This is a rerun from BEQ, but he updated some of the clues.

Theme: Each theme answer is a term for getting drunk, and each clue refers to a guest at this “Wild Party.” Together, the answer is a specific play on who the guest is. 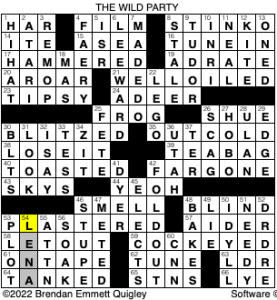 There are so many theme answers here! It sounds like a wild party! As I was solving, it also felt a bit like a MadLib, especially in that 8a kicked off the narrative and the ellipses continued it. I could’ve done without COCKEYED since it feels a bit teasing, but I thought that BLITZED, OUT COLD, and TOASTED were amazing.

Generally, with this much theme content, I thought the fill was pretty smooth. It’s definitely a little tight in each of the corners feeling cut off around the plus sign in the middle, and TER, SCAG, and ULAN all in the middle right section weren’t my favorite. However, the cluing was really fresh, and, as is apparent, there were a lot of themers.

Overall, definitely a fun puzzle that is bananas packed with theme content. 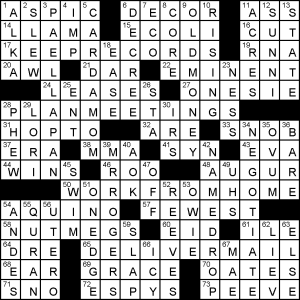 The theme of Hoang-kim Vu’s puzzle is kind of difficult to pin down. The four long across answers are job-related predicates. They are clued whimsically as though to apply to a different job using alternative interpretations.

I found this puzzle quite difficult to close out. There were, as has been common of late, several tricky / different clues for shorter answers:

On the other hand, these were gimmes for me, but I can see others struggling: