Today’s theme clues are familiar(ish) phrases in the form X in Y. The theme entries are also familiar phrases (or words) with circled letters spelling words that represent the Xs and the entries themselves representing the Ys. 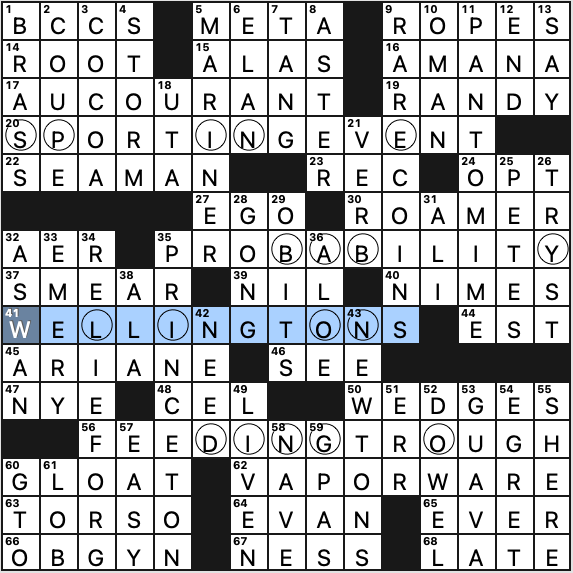 Pretty nice theme! Not all of them are sure-fire winners, but it can’t have been easy to find these, so some leeway should be afforded. I don’t recall seeing a theme like it, so kudos for originality.

VAPORWARE, PANTOMIME, PRINCETON, RARE COINS, NEWTONS, and MARINER top the fill. Interesting that MARINER crosses SEAMAN, but they are not cross-referenced. The entry RELIEF ORG feels weird to me. That lower left section with ARIANE crossing ASWAN and EMERY proved a little troublesome but gettable in the end. I also stumbled in the NW especially since [Herbicide target] seemed to want WEED and AU COURANT was tough to see (and spell). 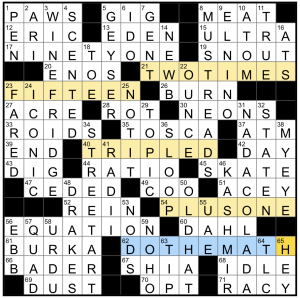 I haven’t seen anything this straightforward on a Thursday in quite some time.  I suppose the prestige here is a) six theme entries in a 15x puzzle, and b) a math equation made up entirely of symmetric components that can be rephrased accordingly.  Outside of that, I couldn’t divine anything significant* from (2 x 15 x 3 + 1).

Cracking:  NADA COLADA (Mocktail with a rhyming name) — I am a Professional Gentleman of Leisure, and nothing says “I’m on vacation” like a piña colada with a giant slice of pineapple.  Hadn’t heard of the virgin variety, but it reads real nice.

Slacking:  NINETY ONE — I’m still not over the arbitrary* solution.

Sidetracking:  ERIC / IDLE (With 68-across, co-creator of the British parody band the Rutles) — Epcot superfans recognize Idle as Dr. Nigel Channing, Figment’s would-be foil on the “Journey into Imagination” ride.  Some people hate the cheesy visuals and simplistic ride elements; those people are dead inside.

Overall, feels like a Wednesday puzzle that got lost in the shuffle, even though my time was in the average Thursday territory.  3.5/5, because the math checks out and the grid made me think of Figment today.

* ADDENDUM:  I have now been informed that the puzzle running on 9/1 is part of the revealer. 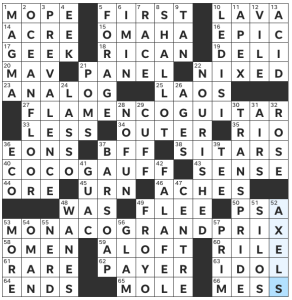 I’m always intrigued when USA Today published a puzzle that’s both written and edited by Erik, since they’re often some of the more experimental or boundary-pushing offerings of the publication. Thus, when I solved today’s puzzle, I actually went and double-checked myself on Sally’s Take to see if there a layer I was missing, but there doesn’t seem to be (let me know in the comments if that’s wrong!). The theme itself is fine, just very standard. I didn’t know any of the answers from their clues alone, but once I got some crosses they all fell into place.

Theme: Each theme answer begins with an O, which stands in for a synonym or meaning of zero. The title refers to the meaning of cypher as a zero. 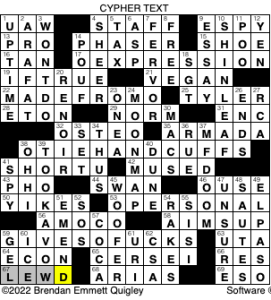 This puzzle led to a big eureka moment for me as I figured out what the Os were. I’ve not used cypher/cipher in this meaning before, and the Google dictionary lists it as dated but Merriam-Webster does not. MADE FROM NAUGHT was the hardest to crack the O while I thought that ZIP TIE HANDCUFFS was the easiest. 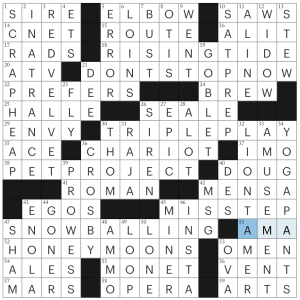 Good morning squad! I loved all the long stuff in here, which was a good mix of nouns like PET PROJECT and LION TAMER and concepts like SNOWBALLING and RISING TIDE. The clue for RED VELVET gave me pause– beets?? Really?? Are people doing that? It feels incredibly blasphemous to me. Now I’m off to listen to “I AM A Man of Constant Sorrow.” I freaking love that song. (I read an interesting discussion about people’s favorite “fictional” song– that is, a song that is created in a piece of fiction by a fictional artist but still, ya know, exists. This was one of the frequently mentioned ones, but I have to say that my favorite is “Seduce and Scheme.”) 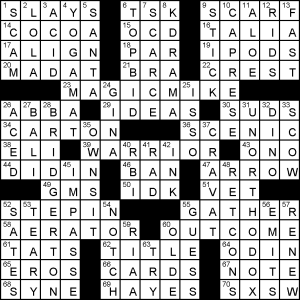 Another very creative theme execution today, this time by Hoang-Kim Vu & Jessica Zetzman. It has left/right symmetry, which is usually a sign something is intricate. Here, we have TITLE/CARDS: answers that are TV shows or movies that start with card games, a mix of playing-card based and other: