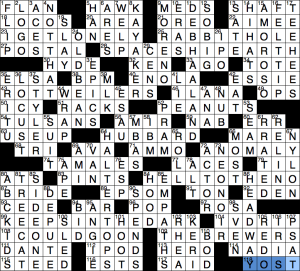 hello and welcome to episode #743 of matt gaffney’s weekly crossword contest, “Butterfly Effect”. this week 4 puzzle, a guest offering from paolo pasco, challenges us to find a term used in history. all right, what are the theme answers? there are seven long(ish) across answers in the grid, each of which has both a real and a hypothetical clue:

in each case, the “what if the clue was” clues the entry that actually goes in the grid. so what is the “instead of” clue all about? and the parenthetical month and year? it turns out that these were all theme clues in previous mgwcc metas from the given months, so we’re looking an alternate history of mgwcc itself. what an amazing and bonkers idea! let’s take a closer look:

phew. so that was a trip down memory lane! but what’s our new meta answer? well, in this oversized (21×21) grid, there were seven entries whose clues could satisfy one of the alternate history meta answers:

taking the first letters of those seven answers in the corresponding theme order spells out FLAPPER, a historical term (from the 1920s) that also cleverly refers back to the titular butterfly, flapping its wings and causing these small changes to ripple through the fabric of history.

this was an absolute tour de force, and i was also delighted to be reminded of some of the clever metas of the past. that said, i must admit that i think i had a leg up on this meta, having blogged all of these puzzles in the first place. i think there were plenty of ways in anyway, especially with judicious googling of the “instead of” clues, but i’m definitely interested to hear about your experiences. what did you all think?