Rachel Fabi & Emet Ozar’s Inkubator crossword, “Up, Up, Up and Away!”—Jenni’s write-up

It took me a bit to figure out what was going on here. I bounced around the grid for a bit and when the light finally dawned it was a satisfying “aha!” moment. The theme entries are two-word phrases where the second word is above and to the right of the first. There’s an ellipsis to tell us to keep going and a caret to tell us to look up. Plus there’s something high-minded about each clue. 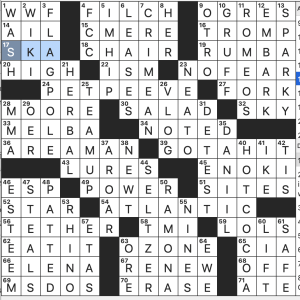 Inkubator crossword solution, September 1, 2022, Rachel Fabi and Emet Ozar, “Up, Up, Up and Away!”

What I didn’t know before I did this puzzle: that OGRES are the smallest of the D&D giants. I also did not know that Millie Small plays SKA or that Celia Cruz is a RUMBA musician. 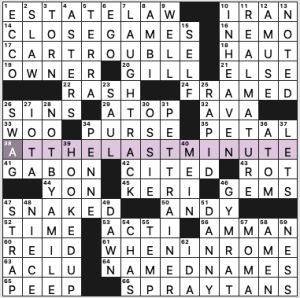 Fairly smooth 72-worder tonight. Fave fill: CLOSE GAMES, CAR TROUBLE, AT THE LAST MINUTE (any other procrastinators in the house?), “WHEN IN ROME…,” SPRAY TANS, NOT BY A MILE (might’ve been nice to clue PEEP without “not”), HOOKED UP, LAUGH TRACK, GYM RAT. 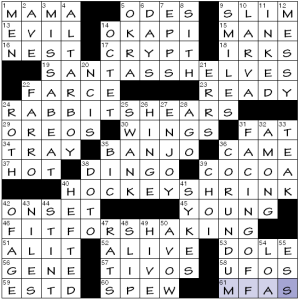 The bigram SH- is prefixed to the second words of the theme answers.

That disconcertment affects my feeling about the theme, I can’t shake it. 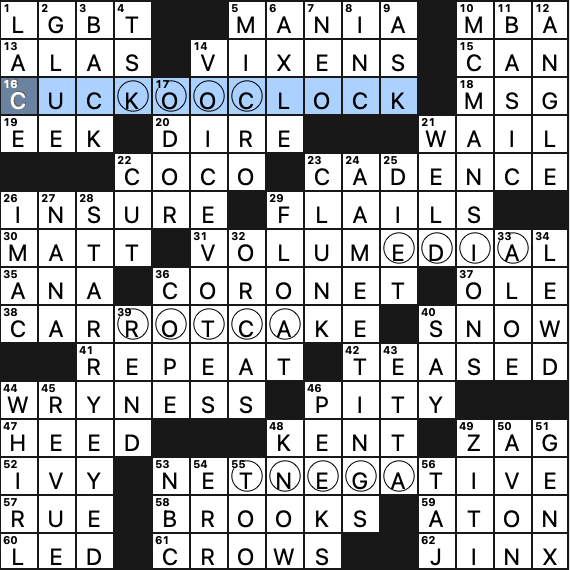 Every time I see the torturous clues in a Universal puzzle with circles, I think, “I thought we were past this by now.” Apparently not. Well, at least those of us with circles can ignore the square counting and focus on the puzzle.

Solid theme. I especially liked the CUCKOO CLOCK and CARROT CAKE entries. But I’m just not too keen on the title. “Switch Jobs” doesn’t say to me, “Look for jobs spelled backwards.” To me, it sounds like something’s going to be swapped for something else. Maybe “Working Backwards” would be a better title. Maybe?

I love the long fill today with MCMANSIONS, VOICE VOTES, AA MEETINGS, and STARRY-EYED. CADENCE and CORONET are nice as well as is ending the grid with a “JINX!”

Theme: Each theme answer is two words, with the first letters of each spelling out P.M., and there are four of them. 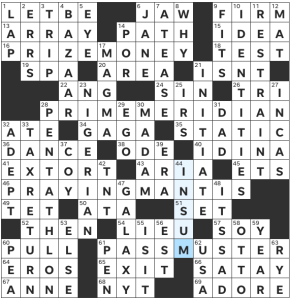 It’s always fun to see four theme answers in a grid, and these were all fun. I needed the crosses to fill in PASS MUSTER and PRIME MERIDIAN, but PRIZE MONEY and PRAYING MANTIS fell into place pretty quickly.

This grid is symmetric with some really fun fill. I liked the cluing on 10d [“They can be secret or mistaken”] IDENTITIES, and, plus with its symmetric partner PENTATHLON, we also got a crash course reminder of numeric prefixes with its clue 28d [“Five-in-one Olympic sport”] and 26a [“Prefix between bi- and quad-”] TRI. GALAXY and BAZAAR were also really fun.

This was such a great puzzle! Have a great weekend! 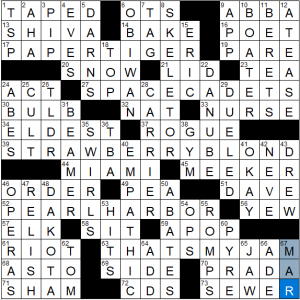 I wish I could have gotten to this at my normal time, because Emily Carroll brings us a lovely theme and a quick solve otherwise. We’ve got four themers tied together by a revealer THAT’S MY JAM [63a “I love this song!” … or a hint to the starts of 17-, 27-, 39, and 52- across].

The respective themers are PAPER TIGER, SPACE CADETS, STRAWBERRY BLOND, and PEARL HARBOR. I adore that each of the “jams” is different; a movie, a band, an annoying printing mishap, and a food item. I also love [Person with a reddish beard perhaps] to clue STRAWBERRY BLOND, which of course needed to be “blond” and not “blonde” to make the theme work.

Wish I had time to say more, but it’s been a day. Have a good weekend!