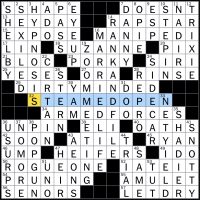 Hi, everyone! It’s Erin, throwing up a grid for Amy, who is dealing with Internet Issues. This is David Distenfeld’s fourth NYT Friday/Saturday puzzle, all in the past nine months. What jumps out at me is a nice cross of triple stacks in the center, with DIRTY MINDED, STEAMED OPEN, and ARMED FORCES crossing ZOOM MEETING, MARRIED LIFE, and RANK AND FILE. We’ve got some older stuff like SUZANNE Somers and OPIE from The Andy Griffith Show. We’ve got some really old stuff like ELI Whitney and his cotton gin, which led to an explosion in the cotton industry as well as in slavery during the 1800s. And we’ve got some spicier fill like SEXILED and drag queen TRIXIE Mattel.

I have to go figure out why my child won’t sleep, then walk my dog, so why don’t you let me know your thoughts on the puzzle? Did any clues or answers stick out as amazing or rub you the wrong way? Tell us in the comments. 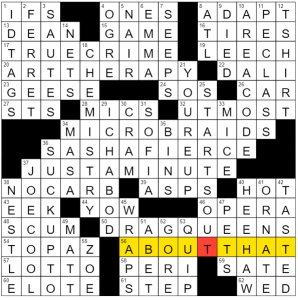 Another fun and clean themeless from Malaika with a wonderful center stack and nice corners. I do love a puzzle that makes me hungry! and there’s plenty to dig into here including MASA [Pupusa dough], WRAPS [Kati rolls and burritos, e.g.], DALI [Artist Salvador who designed the Chupa Chups logo] (I didn’t know this!), HOT [Like ramen but not gazpacho], PERI [When doubled, an African chili sauce], and ELOTE [Grilled corn served with cotija].

In sports, I learned what cone ball (PECLASS) is, and I recently learned that pickleball (NETS) is one of the fastest growing sports in America.

Malaika is constructing for the Boswords Fall Themeless League, for which registration opens today! 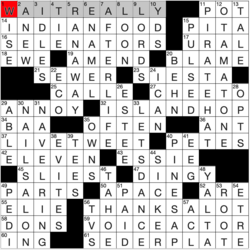 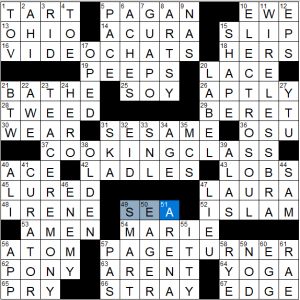 Striking grid from Brooke today that works to accommodate a 13-block central themer and some l-o-n-g downs for a themed puzzle. That middle themer, COOKING CLASS, does a lot of work to hold the grid design together, and the grid is ever-so-slightly asymmetrical to make it work.

Our themers begin with words that can follow “Home” to make common phrases:

There is some SERIOUS representation in this puzzle, and I love it. There are names I know from outside crosswords and am glad to see: Toni Morrison (born in OHIO), SAM Wilson, successor to Steve Rogers as Captain America in the MCU, double-Nobelist MARIE Curie. There are names I learned from crosswords and now know and enjoy outside: Issa RAE, IRENE Cara. And there are names I’m learning for the first time today I’m eager to learn more about: ELECTROSOUL artist Moses Sumney, SKA artist Millie Small, and author Kiley Reid, whose book Such a Fun AGE provides a new angle on a common entry and an addition to my reading list. And not to limit myself to proper nouns: TEA CEREMONY and WIRELESS BRA are entries and POVs that I certainly wasn’t seeing when I started solving puzzles. 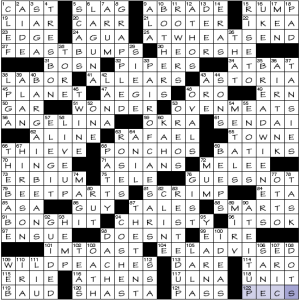 Just going to say it right up front: I found this crossword annoying more than anything else. The theme didn’t grab me, I noticed some duplication, there were some very rough entries, and there were a few clues that might have felt off (or perhaps just a bit too tough).

Some of these are cute, others are just meh. I guess it proves that there’s a bounty of food words with a long e sound.

Had big trouble finishing, in roughly symmetrical areas (central flanks). On the righthand side, it was first and foremost not recognizing that OVEN MEATS was a theme entry—I’d filled in OVEN MEALS earlier on. Didn’t know 61a [Honshu’s “City of Trees”] SENDAI, and had had PANSIES rather than TANSIES for 37d [Aster relatives]. Of course I realized that AT BAP was wrong, so that was swiftly corrected. Nevertheless, AIR LINK persisted for quite a time at 36d [Scuba diver equipment] AIR TANK. Oh, I also had EMOTES instead of E-NOTES for 55d [Modern memos], oops.

Over on the left side, my troubles first started with 66d [Ruth nickname], THE BABE, where I’d had BAMBINO very early on. Even after amending that, there were problems. Going to call 57d [Creditor’s writ] ELEGIT the epicenter of those—completely new to me. I also resisted BEET PARTS because (a) I wasn’t thinking that it was a theme entry, and (b) I didn’t 100% see how it fulfilled the clue. Further, I didn’t know 85a ASA Butterfield of Netflix’s “Sex Education”. THIEVE, ERBIUM, and BONG HIT were a bit hard to get from the clues, which were nevertheless fair. Lastly, 58d [Fulfill, with “to”] LIVE UP; sure, it seems easy, but I was resistant about another UP.

I say another because: 34a [Up] AT BAT, 83d [Conserved energy] RESTED UP, and 90d [Listened enthusiastically] ATE IT UP. Seems like at least one too many. 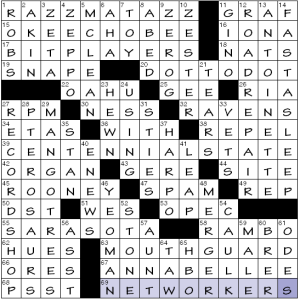 Yet another Stumper that seemed recalcitrant and then yielded rather easily. In fact, by the end it practically imploded—I was getting those long answers in to finish the proceedings. Was quite surprised to see how fast the solve time was.

How did the puzzle treat you?