Hi, all! I hope this post finds you well and experiencing more ups than downs. We have a bit of an Escherian grid today, so let’s climb up an slide in: 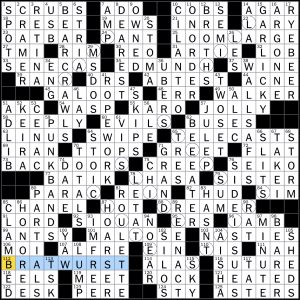 I really enjoyed the Chutes & Ladders nature of this grid, with a HILL, RAMP, and STAIRS to bring you up the grid and STEPS, a SLIDE, and a CHUTE to bring you down it. My favorite theme entries were the one where the conveyance was present in a totally different form in the base answer, like in EDMUND HILLARY or RAN RAMPANT, and I wished there were more of a transformation in some of the other entries. I was waiting on a revealer that never came, but I reckon the graphic nature of this theme along with the title meant there didn’t need to be one. It was a very quick solve for me, though, which was a nice bonus and could tip the scales in favor of this puzzle for folks on the fence (though I suspect there’ll be a mixed response to this puzzle).

My favorite clue of the puzzle was easily 112A BRATWURST [It’s a banger in Germany]. – I love a good sausage joke!

What did you enjoy about the puzzle? Let us know in the comments below – and have a nice weekend! 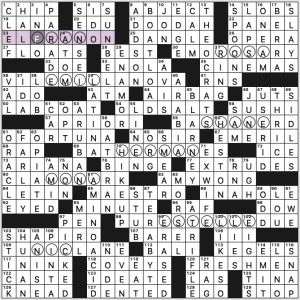 College students are heading back to campus and Evan’s worked eight famous people’s first names starting with F-R-E-S-H-M-E-N (120a. [New college students, and what’s spelled out by the first letters of the people admitted to this puzzle’s colleges]) into college/university names to form new phrases:

Some schools have dispensed with the needlessly gendered term freshmen in favor of first-year students. Theme’s decent, but the resulting phrases mostly aren’t funny. Solid fill, good clues. Four stars from me. 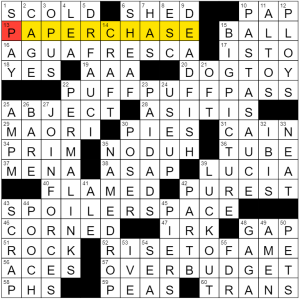 I found this a little trickier than recent Themeless Sundays from Universal. There are a few things here that I’ve never heard of, including PAPER CHASE (13A: Law student’s trial?) and SPOILER SPACE (43A: Lines before a movie’s ending, say?). Of course, I’ve heard of PUFF PUFF PASS (22A: Game for a circle of stoners) (and in fact have it on my own seedlist) but have never heard it referred to as a ‘game’. Was also unfamiliar with PAP (10A) meaning [Mushy food for babies] and POSER (30D) meaning [Perplexing puzzle]. (If anyone wants to explain these to me, please comment!) This particular LEA (4D: Actress Seydoux) was also new to me.

I am amused by what feels now like a little bit of a throwback in FLAMED (40A: Bashed online), especially following shortly after NODUH (35A). I generally enjoy a little more pop culture and vernacular in my themeless puzzles but overall, this is a solid and clean construction from David with lots of interlocking and parallel long entries throughout.

Theme: Anagrams of synonyms for “angry” are found hidden inside familiar phrases. The revealer is MAD SCRAMBLE (117a, [Frenetic rush in each starred clue’s answer?]). Some of these anagrams are quite lengthy, so those clues give you the starting letters (in addition to the tiresome bits about counting squares). 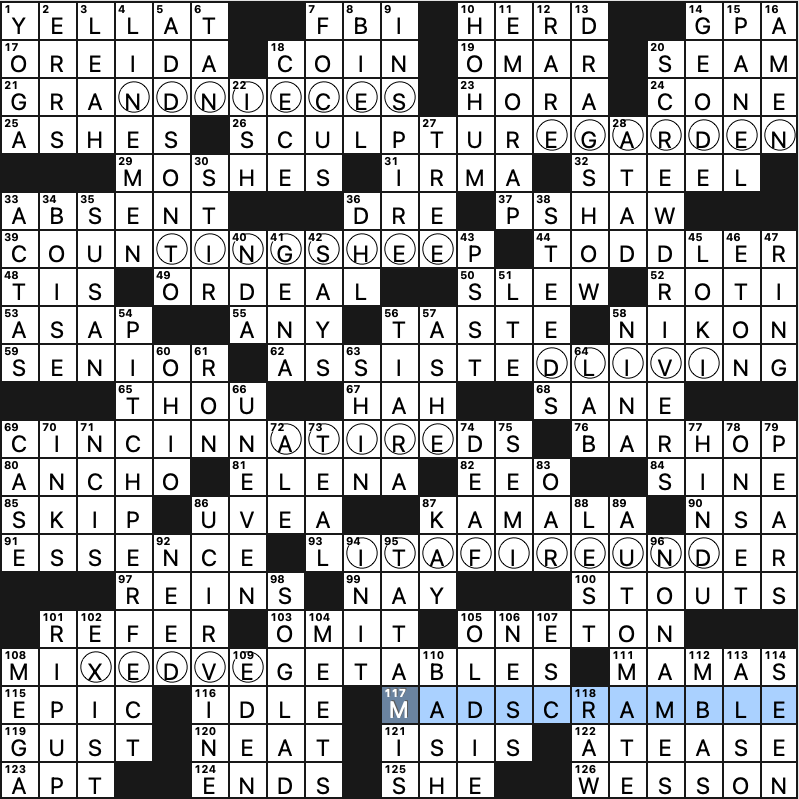 I was really surprised to see the help with finding the anagrams in some of these clues. But as I said, some of them are quite long. I felt like I was on the last level of Anigrams and needed a hint. So yes, when preparing for this write-up, I did partake of such help (because I certainly didn’t stop to figure out the long ones during the solve).

Impressive construction and smooth fill all around. Four stars.

Theme: Each theme answer is made up of three words, the first letters of which all spell out “TOP.” 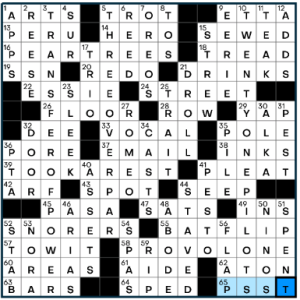 The theme here was not what I expected, thinking that the first word of each theme answer would pair with TOP in some way. It took me a trip to Sally’s blog to find the theme, which was just plain escaping me since I had come in with this preconceived notion. I’m kicking myself now because TWENTY-ONE PILOTS actively uses TOP as an acronym. TRANSFER OF POWER was a nice fifteen, and THREE OVER PAR was also really fun, especially as someone who gets a lot of triple bogeys when golfing.

I was also pretty slow in my love, which I attribute to the fact that the southwest corner was tough for me. I initially had IRIS at 53d [“‘The Flash’ character ___ West-Allen”], referring to The Flash’s wife, but that set me in a bit of a rut with 52a [“Audible sleepers”], having to change my initial N in the correct SNORERS to an I and getting very confused. The choice to list NORA here is a specific reference to the TV version of The Flash, which I’d watched most of, but it was still pretty tricky, especially with TO WIT and 63a [“Units of butter or soap”] BARS. I’m so used to seeing PATS to refer to butter that I tricked myself up.

However, I did really love 16a [“Bearers of Bartletts and Boscs”] PEAR TREES and 55a [“Home run celebration”] BAT FLIP. 41a [“Feature of some shorts”] PLEAT had a nice pair in 59d [“Distressed jeans feature”] RIP, and its crossing with 41d [“Sauce for orecchiette”] PESTO was particularly fun to me for some reason. 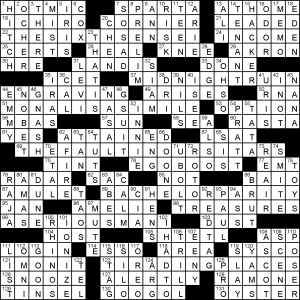 Zachary David Levy has this Sunday’s puzzle: “I Oughta Be in Pictures”. The title explains most of it. “I” is inserted in Hollywood films to create plausible fake titles:

The rest of the grid was pretty quiet, with few long non-theme phrases and only a few playful clues like [Speed reader?], RADAR and [After-lunch sandwich], OREO. There were also a few newer references for otherwise common crossword names, such as BAIO as [Chris of Vampire Weekend], but nothing too difficult to work around.