Congrats to Adam on his NYT debut today! 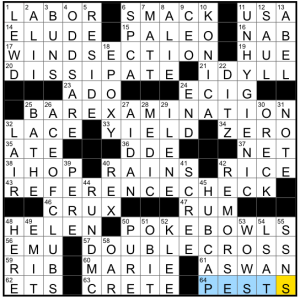 Cross WIND, cross SECTION, cross BAR, cross EXAMINATION, cross REFERENCE, cross CHECK. All very solid phrases, nice! Plus, the middle of the grid has two literal crosses in it, adding another layer to the theme. The theme answers are nice if not spectacular – REFERENCE CHECK is my favorite, although as the daughter of a search consultant I was vaguely offended by the idea that reference checks are only a formality! It also took me a bit to see BAR EXAMINATION since I am more used to seeing just “bar exam”. But overall, I liked how this theme tied together distinct phrases and made me see something new with language. A very cool pattern.

One of my new-to-crossword friends started solving this puzzle while we were hanging out today, and she had a lot of trouble with it, and honestly I can see why. There are a lot of proper nouns that have the potential to trip folks up if they don’t know them: KONICA, ORECK, Paul KLEE, ILENE Chaiken, AIDAN Gallagher. I appreciate that there are extra hints in the clues for some tricky spots like 41d [Patch of loose rock that aptly rhymes with “debris”] for SCREE, but I’m not sure it’s enough. That being said, it is a hard grid to fill due to the 14 letter answers and the crosses in the middle, and I like that the extra long slots give us POKE BOWLS! 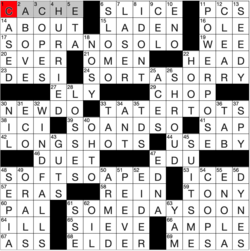 So here’s this puzzle…so it’s about things that start with SO. The revealer is in the center of the grid here, at 39A [Name better left unsaid, or a description of the answers to the starred clues], which is SO-AND-SO. Each of the starred theme clues is a two-word phrase of the form SO___ SO___. Like, well, so:

Pretty straightforward, although I quibble with SORTA SORRY feeling a bit green paint-y. (Google it with quotation marks and the number of hits is in the low five figures, which bears my theory out.) SOFT-SOAP appears in the dictionary with the meaning clued, but it also feels a little dated. The stars are also necessary, given that there are two alliterative nontheme entries, POWER POSE and the always-delightful TATER TOTS (most underrated side dish, especially when topped with cheese and chili as one would French fries) that are nearly as long as the theme entries. True, they don’t follow the specific alliterative pattern of the theme entries, but if you haven’t figured out the theme, you might think the theme is some kind of alliterative action that’s broader than it actually is early in the solve.

The fill is pretty smooth, as the sub-two-minute time attests. 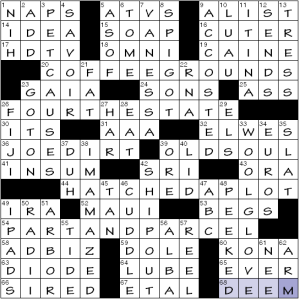 Four phrases whose final word is a synonym for property.

Most notable to my experience was the big duplication of 20-across in clue for 60a [Coffee region southwest of 52-Across] KONA. 52-across is [Home of Hawaii’s Hana Highway] MAUI and 10-down is [Dinner at the Royal Hawaiian, perhaps] LUAU. 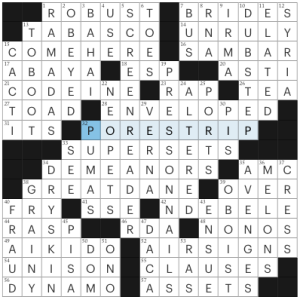 I learned or relearned a few things in this one, but it didn’t feel much harder than a Saturday NYT. Your mileage may vary—if, for example, you don’t know what PRESS-ON NAILS are (they are sold in basically every American drugstore/grocery with a cosmetics aisle—and the PORE STRIPs are nearby in the skin-care section), you might have had to fight harder to finish. I appreciate it when puzzles include things that are probably more familiar to women than to men—payback for the decades of IROC GTO OTT content.

New or newish to me:

I learned too much about 21a. [Active component of lean], CODEINE in the HBO Max documentary, Juice WRLD: Into the Abyss. The crew blithely filmed Juice WRLD at age 20 taking increasingly massive doses of lean—multiple ounces of codeine cough syrup added to a bottle of pop, multiple times a day. Get rich enough, and you will always have enough lackeys happy to comply with your drug abuse requests. Tragic loss of a gifted young musician.

Four stars from me. I liked the things I learned! Wondering if any solvers didn’t encounter anything new to them in this puzzle. If you can’t introduce newer fill in the hardest-of-the-week crossword, when can you? 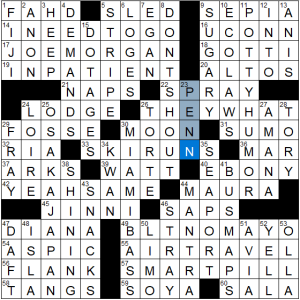 Easiest BEQ puzzle I can remember in some time, though there’s plenty I didn’t know. Fun grid design, too, with the NE and SW corners balancing longer entries with some more open space. I’m sure I would have had a different experience if I were less familiar with baseball Hall-of-Famer JOE MORGAN [17a His #8 was retired by the Cincinnati Reds], but I was able to work around unfamiliar entries all over the grid.

Highlights for me: THEY WHAT [26a Question of incredulity at a group’s behavior], DOTAGES, DON’T SHOUT. Quite a few new-to-me names: FAHD, Yo GOTTI, MAURA Johnston, Chris PENN.

Anything tricky to spotlight? Let’s see: A pair of brand names-as-misdirection in [22a Degree application] and [55a Virgin offering?] for SPRAY and AIR TRAVEL, respectively. Nothing else jumps out much, other than that I’ve never heard Adderall referred to as a SMARTPILL, but I suppose I can see it.