Sara Nies’s Inkubator crossword, “It’s All in the Delivery”—Amy’s write-up 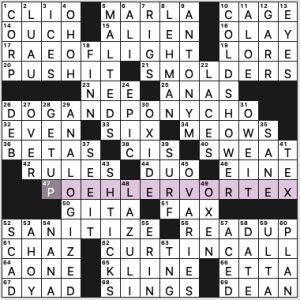 Inkubator crossword solution, 9/9/22 “It’s All in the Delivery”

It’s Amy, filling in for Jenni. Puns on the surnames of four funny women are the theme this week:

I like the span of comedians in their 30s, 50s, and 70s. Can you believe that the SNL “Weekend Update” catchphrase when Curtin coanchored with Dan Aykroyd in the 1970s was him saying “Jane, you ignorant slut”? (Her rejoinder of “Dan, you pompous ass” is neither crudely gendered nor so well remembered.) 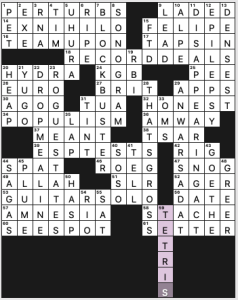 I figured the theme had to be Tetris by looking at the grid, and indeed, there’s 59d. [Best-selling video game celebrated in this grid], TETRIS extending into the black blocks at the bottom. With those four unchecked squares, woe to any solver who never heard of Tetris, because I don’t know that there’s any way to know what goes in those squares if that’s a gap in your knowledge. (The black squares are the various tetrominoes—four-square blocks in assorted shapes—that are Tetris game pieces. The black at the bottom would be space filled in successfully by dropping previous blocks there.)

The theme includes BLOCKBUSTER, DISAPPEARING ACT, and maybe DROP ME A LINE, since the BLOCKs are DROPped before they DISAPPEAR.

And yeah, lots of people aren’t keen on themes invading their Friday puzzle—it PERTURBS them.

A few clunkers in the fill (like ALPE and OMS) but mostly solid.

3.5 stars from me. Bring back my themelesses!

Our theme today consists of sweet consumables that hide a synonym for “zero” within. The revealer is SWEET NOTHINGS (50a, [Tender words often whispered, and a hint to this puzzle’s theme]). 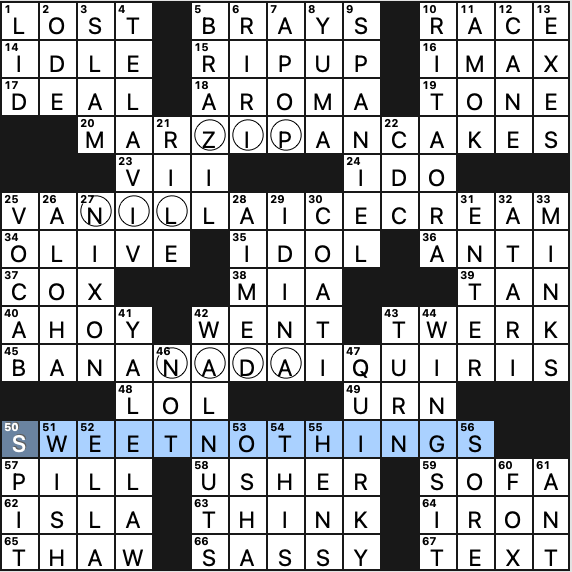 Nice, tight theme. Typically, hidden words span multiple words as in the last entry, but the theme is so tight (not just food items, but sweet food items) that the other entries were given the okay. Both revealer and title are on point as well. Nicely done.

In the fill, I like WINGS IT, YALE LAW, TEL AVIV, WALNUTS, QUIRKY, and fully-named RITA ORA. It felt like there was a lot of proper names today (Cynthia NIXON crossing Laverne COX, RIRI, footballer Neymar in a clue for BRAZIL, IDINA Menzel, ELLA Fitzgerald) but the crossings were all fair save for NIXON/COX and even then, the X is the most obvious choice.

Nice puzzle that shouldn’t be done on an empty stomach. 3.75 stars. 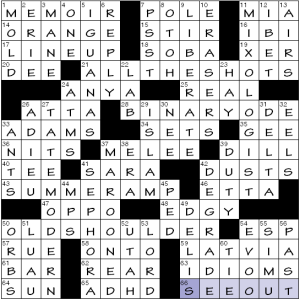 See, that wasn’t so bad.

Theme: Each theme answer is a profession two words long. The first letter is P for the first and R for the second, making them PR Pros. 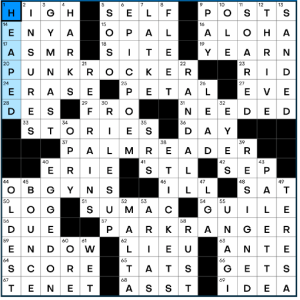 I think that the two layers of this theme (one in them being PR words and the second in them being professions) is super fun. I thought that PUNK ROCKER was going to be a named person or group, which was at first harrowing (because my knowledge of popular music is limited), but I figured I’d catch it on the crosses. Then, the profession half of the theme clicked.

This grid is asymmetric, and I really like its open corners. The smattering of black squares in the center also didn’t feel too clogged up, making for a really smooth fill. It was nice having ETICKETS, REFRAINS, RESIGNS, and EPIC POEM for some longer answers in addition to the themers. I also thought that EGGED ON and PALETTE were both really fun.

Other Friday faves for me: 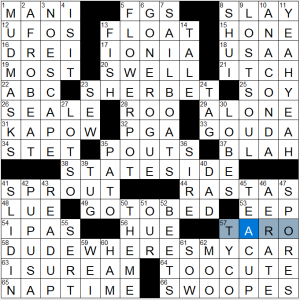 The symmetry gives us a triptych of stacks, each with a phrase clued to the car make found in its second word:

Cool to see such a tight set found in common phrases. I’m tired from a long week of work, pretty hungry, and happily in Washington D.C., where I can find PUPUSAs [42d Salvadoran griddle cake served with salsa and curtido], so I’m cutting myself short today. Have a good weekend!