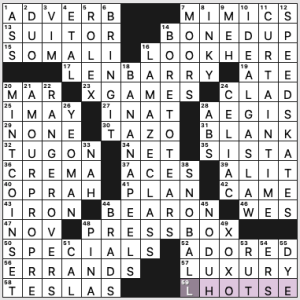 When you see the KAC byline on a Saturday, you know you’re in for a challenge. He excels at impressive grids and tricksy clues. Bring it! 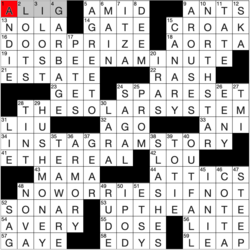 Most of the time my theory about themelesses is that I don’t give a crap about grid fireworks; if, for example, a 64-word grid or a quad-stack of 15s comes at the cost of boring obscurities in the crossings, I’m not impressed. And if a 72-word themeless that doesn’t have a ton of entries that “sparkle” on their own is clued with brilliance, I am here for it.

This grid, however, feels like it was meant for a themed puzzle, and the 14s at 19A, 28A, and 48A don’t make me go “wow” enough to justify seeding a themeless around them, much less a themeless with this many 3s, 4s, and 5s (47 in total). I did very much like the clue [24-hour post] for INSTAGRAM STORY at 34A, which is a nice misdirect that had me thinking in terms of short-term jobs before I had enough crossings to realize what was actually going on.

I did enjoy these bits: 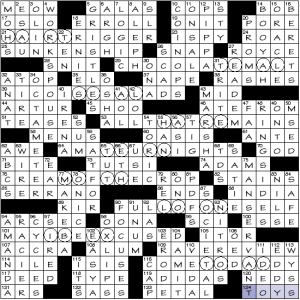 During the solve I strongly suspected what the extra layer would be, so I was a little disappointed to see it made explicit in the final across answer, which is a revealer. On the other hand, it provides more context so that the hidden bit makes sense.

These phrases are all very good. It’s a well-put-together theme. 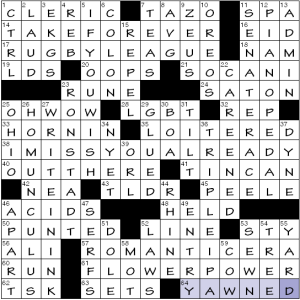 This one played slightly differently for me than recent Stumpers. From the start, I was able to complete nearly all of the top left section, so it looked to be a pushover. But then there was trouble gaining footholds anywhere else, so my revised opinion was “uh-oh-tough!”

But somehow I kept finding a solvable  entry just when hope seemed lost. Every time I needed one, it was there. As a result, the whole grid was done in relatively short order.

There were a couple of extra-tricksy clues down on the bottom, but since I had so much filled in, they proved to be easily surmountable: 58d [Audible crack] MOT, 53d [Made like some bee products] SEWN. 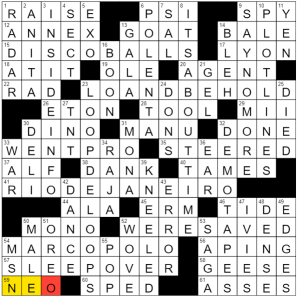 Super breezy puzzle from Rafa today that is right on my wavelength. So much fun and personality in the clues; just the way I like my themeless puzzles. The diagonal symmetry here is gorgeous, and allows for all of the long pairs to intersect each other: ITSABOUTTIME x RIODEJANEIRO ;  LOANDBEHOLD x LOOPDELOOPS ; DISCOBALLS x INSIDEINFO.  I learned that Maracana Stadium in RIO DE JANEIRO, Brazil (41A) has a capacity of over 78,000! and has hosted the World Cup, the Olympics, the Backstreet Boys, and one pope.  The sole sticking point for me was MANU but I’m sure lots of folks are happy to see that one!