Hi all! It’ll be a quick write up today, as I’m about a day after getting my bivalent COVID booster shot and flu shot… and gosh is my body doing its job. Even still, I’m glad I got both of the shots and I hope you do, too (if you’re able!), especially to protect those around you who aren’t able to get them.

Ok, now onto the puzzle, which is a study in contrasts: 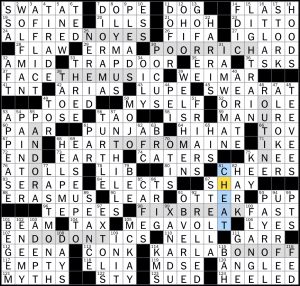 Each theme entry contains contiguous opposites, which is pretty neat! I can’t imagine there are many entries that fit the theme this tightly, which is probably why some of them maybe felt a bit tougher to plunk in. I’ll admit I didn’t know many of the proper name theme entries, but the theme actually helped me fill them in based on obvious opposite pairings. FIX BREAKFAST might have been my favorite themer for its sheer simplicity!

Random thoughts:
– It felt like there were a few tough crossings that didn’t need to be, mainly CHEAT [Mountebank] crossing SHAY [Horse-drawn carriage] (whose H could have easily been an L or whose clues could have been more gettable) and (for me, at least) ELIA [___ Martell, “Game of Thrones” princess] crossing MCKAY [Longtime sport journalist Jim].
– That said, I really did like the idea of intentional FLAWs via [Persian ___ (rugmaker’s deliberate mistake)].
– 90A: LEAR [Norman or English king?] – Clever wordplay going on here, referencing either Norman LEAR (whose daughter I taught!) or King LEAR.
– 93D: PAYROLL [What all companies try to make] – I don’t know why, but the wording of the clue here irked me, as it implies to me that companies will try to compensate workers for their time and, gosh, if they can’t, what could they possibly do? I understand that the clue is likely implying that some businesses aren’t successful enough to make PAYROLL and profit, but profit shouldn’t come until the workers have been fairly paid. I’d send this back for a clue rewrite.

What did you think of the puzzle? Can you think of other entries that’d fit this theme? If so, let us know in the comments. Be well, get vaccinated if you can, and take care of yourself and those around you! :)

THEME: Things that are, in fact, dates 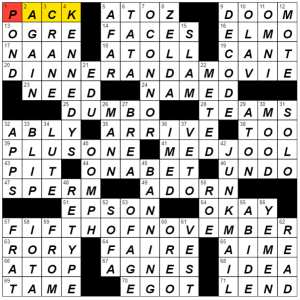 Fun one from Kevin today. Because there is no revealer and the solve is on the fast side, it’s pretty easy to not really pay attention to the theme while solving. Only after I stopped my timer did I re-read the title, scan the grid, and say to myself four times, “yep, that’s a date!” I’ve never heard of DINNERANDAMOVIE as the show, but it’s certainly inferable and is of course, a date. (Upon reading up on this show I am realizing that it is fodder for potential theme ideas – one episode is called “Drumline” and features a recipe called “The Beets Go On”.) FIFTHOFNOVEMBER is an interesting choice here. One could presumably find many dates that would span the grid, but the real task is choosing one that has a distinct meaning from just being “a date.” PLUSONE does feel a little similar to DINNERANDAMOVIE in that they are usually both dates in a romantic context but it still works just fine for me. Thank you Kevin!

Theme: One-word Broadway shows are hidden backwards (i.e. going up since all the theme answers are vertical) within familiar phrases. As usual, be prepared to count squares if you’re not fortunate enough to have circles in your puzzle.

(I wonder how many solvers actually do the square counting. For myself, if I was faced with a puzzle—especially a Sunday-sized puzzle—that asked me to count squares to get the theme, I’d probably just find another puzzle to do. I know editor David Steinberg is doing his best to work around the limitations imposed upon him, but still, counting squares in a 21x grid is not my idea of fun.) 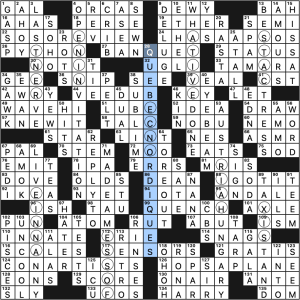 Ignoring the square-counting parentheticals, this theme didn’t do a lot for me personally, since I’d never heard of four of the nine shows, nor the Linkin Park song. The entry I liked best is easily LIVE-IN NANNY because the phrase is common enough, the musical is widely recognized, and—quirkily—Annie rhymes with Nanny.

Looking at the rest of the entries themselves, they’re solid to good. I like OPEN INVITATION as an entry, and I especially like double-Q’d QUEBEC NORDIQUES holding court straight down the middle.

Moving to the fill, the center of the grid is heavily segmented in order to separate themers. That results in somewhat of a slog of three- and four-letter entries. But there’s a fair share of long entries at the top and bottom of the grid. However, they feel mostly workmanlike, probably because they’re almost all crossing two theme entries. Perhaps the grid would have been better served with two fewer theme entries which would allow for more breathing room.

CON ARTISTS tops my list of fun stuff, as well as VEE DUB and I GOT IT. I didn’t know Chef NOBU Matsuhisa, but it’s interesting to read his story as he traveled the world from Japan to Peru, Argentina, Alaska, California, and New York to find his place. I’m still not sure if EYE BEAM [Ray from the X-Men’s Cyclops] is a legit entry.

Fun puzzle if you’re a fan of Broadway. But I felt the theme density made the solve less fun. Three stars.

Theme: The end of each theme answer is a part of a sword. 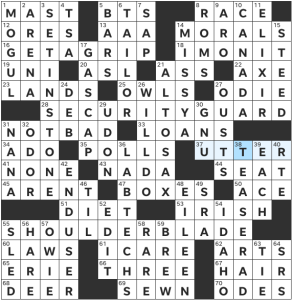 Put these themers together, and you get a fully-formed sword! I thought that they were nicely removed from their meanings as part of a weapon. GET A GRIP felt particularly funny. I had COLLAR at first instead of SHOULDER but then realized that it only went with BONE, so I quickly switched it. Also, if you’re a fan of the legend of King Arthur, it’s also extra fun to see 3d [“Unchangeable”] SET IN STONE. STEED and ELIXIR also felt like some great bonus theme content too.

This grid is asymmetric, and it’s fun to see things like ALTO SAX, GAS CUP, and TEASER AD smattered throughout. It was also entertaining to go from 31d [“Granny”] NANA to its crossing with NONE (41a [“All’s counterpart”]) to 43a [“Nothing, in Spanish”] NADA.

What a fun, imaginative puzzle for Sunday! 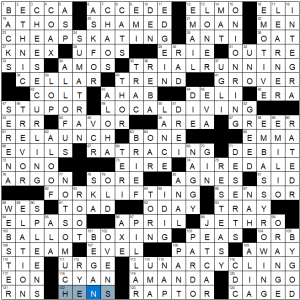 Amusing theme set, and fun to pause and muse over the changes in the “sport” words — perhaps “lift” in “forklift” retains some of its meaning.