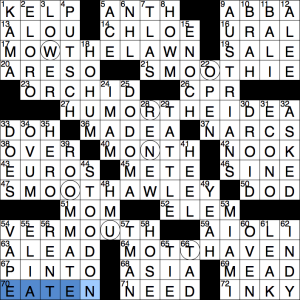 hello and welcome to episode #745 of matt gaffney’s weekly crossword contest, “Hanging by a Thread”. for this week 2 puzzle, matt challenges us to find a synonym of “threadbare”. what are the theme answers? it’s not immediately obvious how many of them there are, but one short one stands out: {Moth-___ (threadbare; not the meta answer!)} EATEN. with that in mind, it did not take long to notice seven other theme answers with the letters of MOTH in order, with one extra letter sandwiched between the MO and the TH:

this was a nice meta. it felt a little on the easy side for a week 2—i don’t think it would have been out of place in week 1. even not noticing the moth-EATEN clue, i definitely took note of the MO and the TH in all six longer theme answers. the one thing that feels a little forced is the connection between EATEN and that extra letter—an inserted letter as the meta mechanic feels almost like the opposite of EATEN, which to me is synonymous with “gone” and therefore suggests a deletion rather than an insertion. so that slightly diminished my appreciation for the meta.

another thing that raised an eyebrow, but did not diminish my appreciation for the meta, was its scheduling just two weeks after paolo’s “butterfly effect” puzzle, which was not only also lepidopteran in theme, but actually used the association of “destructive insect” with MOTH as a key step in the meta mechanism. but perhaps the recency of that meta made the MOTHs in this one easier to notice.

some random, very much unconnected observations on the fill and clues: