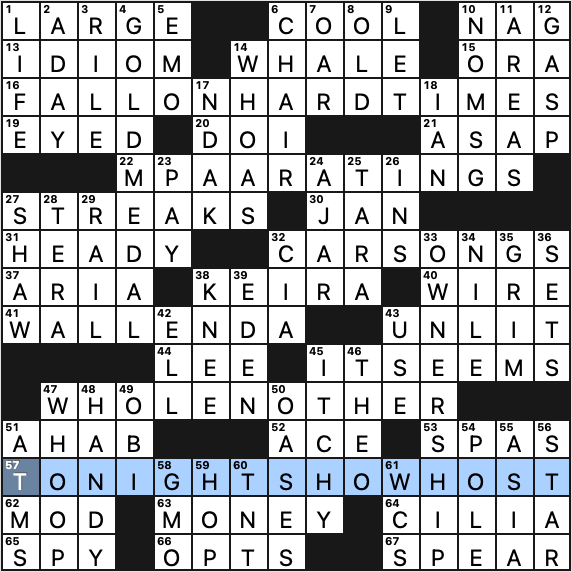 When I got to the revealer, before fully solving it, I gathered that we were looking for late-night talk show hosts, but then I was mildly surprised that they were all specific to one show. That’s a tight theme, so I’m impressed that we have five of the six hosts here. CAR SONGS feels a little green paintish, and ALLEN doesn’t span two words like the others, but with a tight theme like this, we can allow some leeway. Nicely done.

With six long themers, there’s bound to be some crosswordese in the grid such as N DAK, plural WHOAS, and NO MSG, but it’s not beyond the pale, and there’s still plenty of nice fill like GOLD MEDAL, “IT SEEMS…,” and STREAKS. 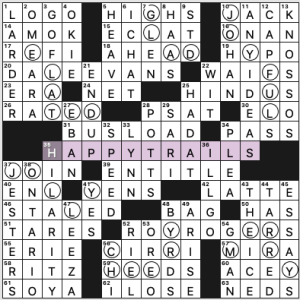 It’s a cute concept, this theme. The DALE EVANS and ROY ROGERS song “HAPPY TRAILS” is depicted with synonyms for happy sort of trailing throughout the grid (in the curcled squares). There’s ELATED, JOLLY, GLAD, JOYFUL, CHEERY, and MERRY.

HILARITY and JESTERS in the southwest corner almost feel like part of the theme, but their opposites in this grid are “ANY IDEAS?” and KNOSSOS, so … not thematic.

I couldn’t get past all the clunky fill that accommodates the triple-checked letters in the “happy” trails. ECLAT ICHAT JOHAN ENL TARES RIEL ILOSE THEICE SOYA ILLGO EBAN? A lot of this felt like a crossword from 20 or 30 years ago, and then the song in question was released as a single 70 years ago. Oof! 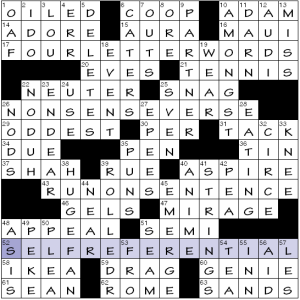 I’m a sucker for self-referentiality, so this crossword is bound to land in my good graces. 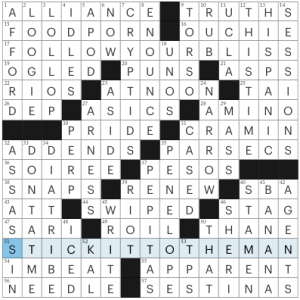 Editor:  Erik Agard
Theme: Each theme answer is contained within the string “STAND” . 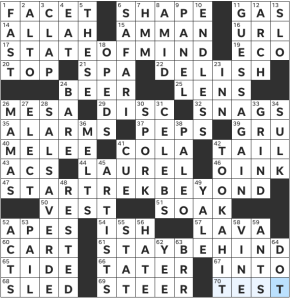 My favorite thing about today’s theme is its juxtaposition with yesterday’s “Inner” theme. I don’t usually solve the USA Today puzzle aside from the days that I write up for Fiend, so I don’t know how often the publication does this sort of progression, but I love it – It feels like a meta puzzle for regular solvers.

The theme on its own is fine, if nothing particularly special. STATE OF MIND and STAY BEHIND are solid phrases. I have never seen any of the Star Trek universe, so remembering STAR TREK BEYOND was not going to happen. Luckily the mention of Nimoy in the clue was a big help in terms of getting an idea of the answer. 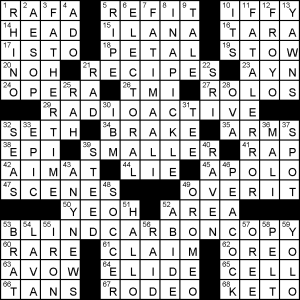 I’m not sure if there’s something I’m missing but KETO is largely a fad that’s a [Diet that’s high in fats and low in carbs, as illustrated by parts of the answers to the starred clues] and there are three down answers that start with FAT and one across with CARB (in a related word) in it. These entries are:

Current answers to old standbys continues to be a feature: [Glazer of “The Afterparty”], ILANA; [Curry of the NBA], SETH. On the other hand [Hockey Hall of Famer Willie], OREE is not an answer I knew, but he’s more Boomer-era, and apparently the first black NHL player.

Not really much to say. I lost my dachshund, TARA, at only 5 years, this week, to some vicious and acute haemorrhagic gastro-enteritis. She went from healthy to dead in 24 hours despite everything we could do, and as a vet, I feel incredibly guilty and powerless… 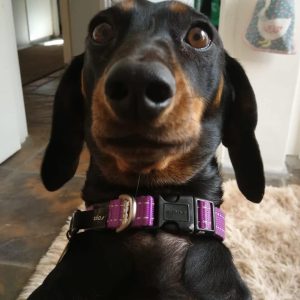