Note: Fireball is a contest this week. We will have a review after the submission period closes.

Theme answers consist of familiar phrases where one word normally has a double-P, but one of those Ps is removed resulting in crossword wackiness. The title should be read as “P-light,” i.e. each phrase has fewer Ps than it did originally. 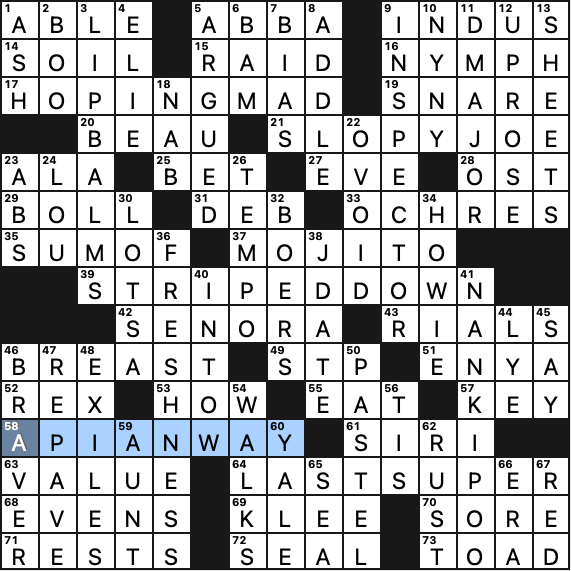 While the the first three entries didn’t do a lot for me, neither did they overly bother me, and the last two were enough to win me over. So all in all, I enjoyed the theme. There can’t be too many double-P words that are still words after removing one of the Ps, and I appreciate using the double-P as a constraint.

In the fill, we have the fun INSPECTOR Gadget, LIP BALMS, MOJITO, and FRESHNESS. I didn’t know NANKIPOO [The Mikado’s son], but it looks great in the grid.

Nice puzzle overall, 3.75 stars. Oh, and it’s a debut, so congrats to our constructor! 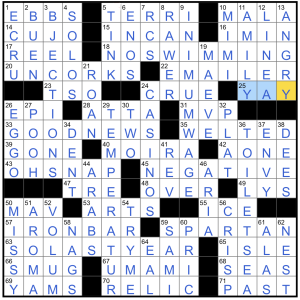 I really want there to be some extra step here, a revealer I glossed over, an angle I didn’t spot, but it doesn’t feel like it’s in the cards.  You’ve raised a STINK, a FAMILY, the MINIMUM WAGE, and OBJECTIONS so that they’re off the top of the grid.  On the flipside, you’ve lowered the VOLUME, PRICE, TEMPERATURE, and TOILET SEAT off the bottom.  Considering how straightforward the theme is — for the third Thursday in a row — this one played much harder than the last two.  Why?  Maybe because you have fill like WELTED and LYS and SAMI, MALA fides instead of bona fides, TRE MAV EPI TSO, and a run of proper Ms — MISSY and MAEVE and MIMI and MOIRA, oh my.

Cracking: SO LAST YEAR — is it ironic that this phrase is so last decade?  Still fun fill, tho.

Sidetracking: YAMS — YAMS are inexorably linked to an episode of Night Court inside my head, titled “The Last Temptation of Mac”, where Christine’s bad YAMS make everyone violently ill. You also get Leslie Jordan making a great cameo as a Macy’s Thanksgiving Day Parade handler. Mac’s storyline, incidentally, is the least memorable part of the episode. 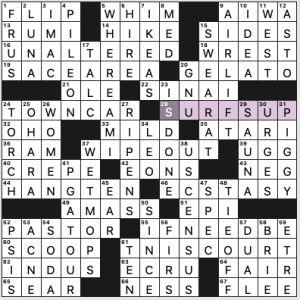 A rather complicated theme here. I haven’t been doing many of the Universal puzzles, but based on this theme, I’m going to guess that the difficulty level does ramp up throughout the week (though this one’s easier than a Thursday NYT). The puzzle’s title is (old?) surfer slang, and that’s the vibe:

61d just gets a [See 61-Across] clue, though TEN is a legit entry unto itself. The theme would have been a little more elegant if FRUS were also a legit entry, but it’s not, and it would be tough to lodge an answer like FRUSTRATE at 1d in a themed puzzle.

Theme: Each theme answer adds a C to a common phrase, changing it so that the first word of each one is a celebrity’s last name. 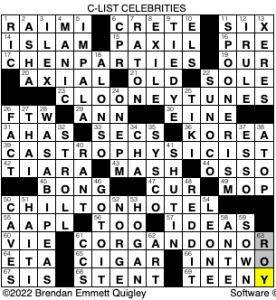 I liked the small modification of this puzzle and thought that the clues worked well for the theme’s mechanism. CLOONEY TUNES is hysterical, and, once I got that themer, the rest fell in line pretty quickly.

The grid itself is really nice and feels open as you move through. I was pleased with myself for remembering SPOONERISM as the term for 11d [“Packed lunch / lacked punch, e.g.”]. The clue for 58a [“Chips for openers] ANTE was also really great. There’s also a joke there to be made about ANTE being an appetizer for poker.

Overall, a really clever puzzle! BEQ mentions that this could maybe have spun out into a Sunday puzzle, and I’m so curious about the other celebrity options. Maybe someday we’ll find out. 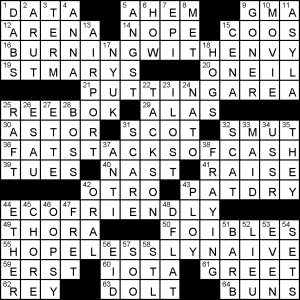 Micah Sommersmith does the clue reversal thing, today with [Green]. All of the greens are derived from the colour in one way or another, but are not the colour. So: BURNINGWITHENVY, PUTTINGAREA, FATSTACKSOFCASH, ECOFRIENDLY, HOPELESSLYNAIVE. This theme, for me, works much better with entries like ECOFRIENDLY that are valid stand-alone entries, otherwise they either seem padded: HOPELESSLYNAIVE or clunky PUTTINGAREA. I don’t quite get the synonymy of FATSTACKSOFCASH at all, although I recognize the connection between GREEN and CASH.

Tricky spots, of which there weren’t many: 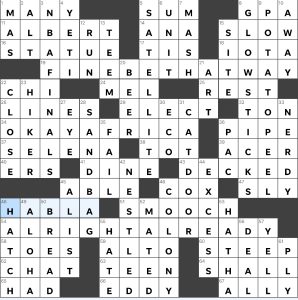 Theme: the first word of each themer is a synonym for the word “Decent”

Loved the themer set, though it took me a few crossings to help complete them. FINEBETHATWAY is a great expression, though I think of it as usually a flippant response so the cluing was a bit tame for me to make the connection. OKAYAFRICA had excellent crossings so even if this entry was new to anyone, it should be very gettable which can be tricky to do in some cases so kudos. ALRIGHTALREADY feels like it’s rushing me to hurry up with this review but despite that it’s a fun themer to round out this set. Based on the theme, we get FINE, OKAY, and ALRIGHT.

For me, many of the entries felt fresh and fun, plus cluing was excellent too. I look forward to more of Rafael’s puzzles and hope we see another soon!