This one certainly was very challenging. I finished with one incorrect square and had to reveal the answer to figure it out. It’s a striking grid with four quadrants that play like separate difficult puzzles.

The grid is also full of good stuff, much of which was outside my knowledge base. That’s not a complaint! I like learning things. There’s one 15 running down the grid that was just on the edge of my memory and I eventually dredged it up.

You can see the square where I got stuck. I have never heard of KAITLIN Olson and have never watched “Always Sunny in Philadelphia.” I can’t imagine any clue for KHAZI that would have helped me. [British slang for a bathroom that’s one letter away from a color] left me shaking my head. 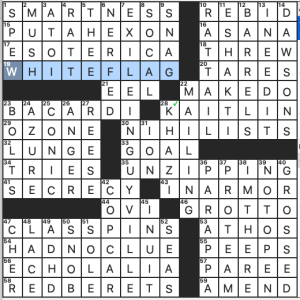 What I didn’t know before I did this puzzle: see above. I also have never heard the Dido song WHITE FLAG. 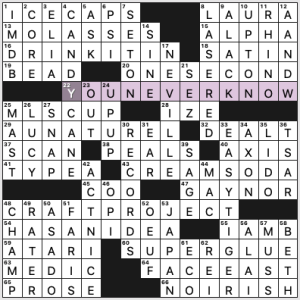 Dang, this one fell faster than the Wednesday NYT for me. (But not as fast as the Thursday New Yorker puzzle—that is one easy themeless each week!) A brisk start to the weekend puzzles.

Fave fill: DRINK IT IN (or what I’ve been doing with this week’s perfect weather), “ONE SECOND…,” “YOU NEVER KNOW,” old-school CREAM SODA (which is my favorite flavor of Dum-Dums suckers), Gloria GAYNOR, CRAFT PROJECT (none for me, thanks), SUPERGLUE, CANDY CANE, and whoa there, “EASY, TIGER.”

Can’t say the MLS CUP (25a. [Goal-oriented final match, in brief?]) was on my radar. The household sports junkie prefers European soccer to American.

Theme: HIDDEN VALLEY (51a, [Dressing brand, or a theme hint]). Theme answers are familiar phrases which hide a name that can precede the word “valley.” 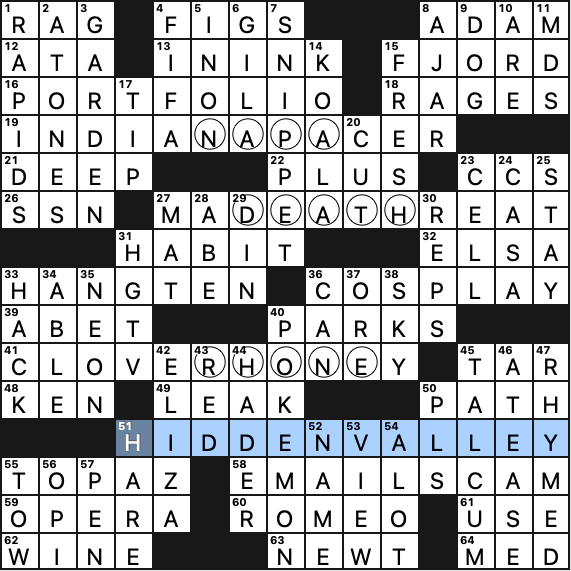 Nice theme. I couldn’t connect the first two answers after uncovering their circled letters, so the revealer gave me that much-needed aha moment. Too bad “Silicon” Valley is too ungainly for this theme. I found “Simi” Valley hidden in “CSI: Miami,” but the entry would be an unhelpful eight letters in length.

I love the central quartet of sevens: SNIPPET, HANG TEN, COSPLAY, and POKÉMON, as well as those two long Across entries: PORTFOLIO and EMAIL SCAM. Everything else felt familiar and smooth, making for a pleasant solve.

Enjoyable puzzle all around. Four stars. 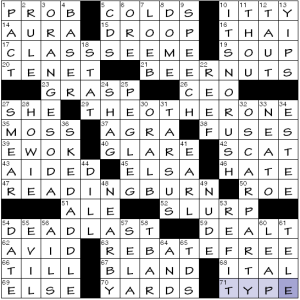 Had a little trouble figuring out the theme here, but 47-across provided the insight.

Straightforward, really. But not literally.

Overall the fill felt businesslike. Solid crossword with a little bit of mystery to discovering the theme.

Theme: Each theme answer refers to a first-happening event. 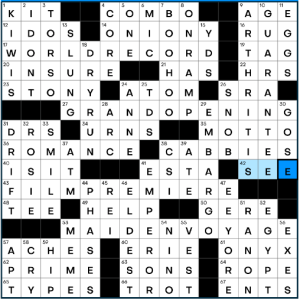 This theme was straightforward, and I appreciate that, as a result, we got four themers out of it. I wasn’t familiar with the TCL Chinese Theatre in the clue for FILM PREMIERE, which was originally Grauman’s Chinese Theatre and first opened on May 18, 1927.

The grid felt really smooth. I struggle at times with the two sets of black squares coming off a center square because it often feels like it bisects the puzzle diagonally, but I didn’t feel that as much with this grid. Everything flowed nicely from one section to the other, especially on the right side of the grid with the longer ARTHRITIS, GUARANTEE, EMBARGO and EEYORE.

Overall, I had a great time with this grid!