Theme: Each theme answer begins with a DATING APP. 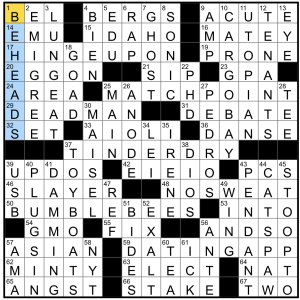 Sometimes when I solve Monday puzzles I have to get to the revealer to understand what the theme is. That was not the case today at all (…please don’t read into what that says about my life). After I got the first two theme answers, I could drop in the beginning of TINDER DRY and all of BUMBLEBEES and DATING APP no problem. It’s a cute theme, even if some of the answers don’t stand out much (looking at you, HINGE UPON). Also, and maybe this is personal bias, but Match seems much less well known/used as a dating *app* in particular to me – I still immediately think of it as match.com. But they do in fact have an app so it does fit the theme!

Given the 9-letter center theme answer, I’m not surprised that the grid feels segmented into large corners. Making a big corner like the ones in this puzzle without any dreck is a challenge, and I liked a lot of the words Sarah chose – CATS PAW, CARGO BAY, UTOPIAN, TOY BOATS all add value to me. There are a few words that are not optimal – the foreign DANSE, the vowel salad EIEIO, the plural PEDROS – but they were generally easy enough to puzzle out. I had to spend the last 30 seconds of my solve error hunting; turns out I had “dead men” and not DEAD MAN for 29a [Sort who tells no tales, per an old saying].

I loved how much personality was packed into the clues of this puzzle. Some of my favorites: 49d [Common eyeliner shape] for WING, 13d [One of up to 200(!) on a scallop] for EYE, and the somewhat morbid 1d [Gives the Anne Boleyn treatment] for BEHEADS. Congrats to Sarah on her NYT debut today! 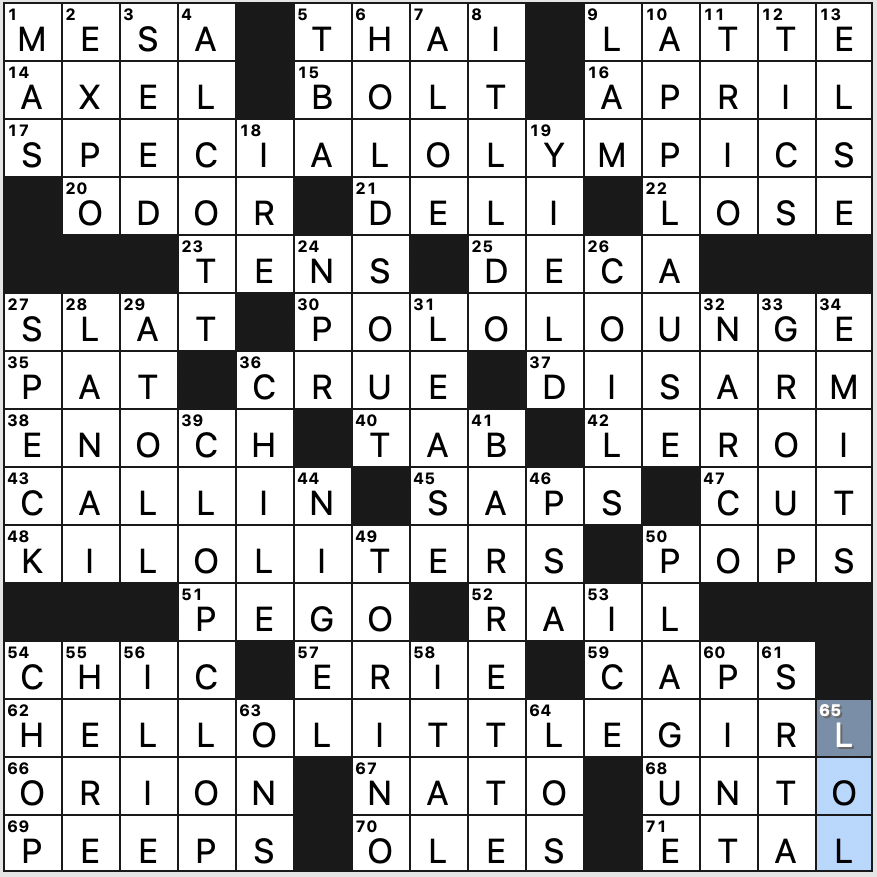 Okay, let me get this nit out of the way. It’s not really a joke that’s “inside” as the title implies, it’s the reaction to a joke. I’d rather the title was something like “Laughing On the Inside” (though you probably couldn’t use “laughing” since one of the Ls is “laugh”). Anyhoo.

This is a fine example of a hidden word theme. I like both the grid spanners, though I’d never heard of the John Lennon song. (Here’s a decent version of it by another ’60s band.) There don’t seem to be that many potential theme entries, so having the single word KILOLITERS is a compromise, but it pairs with the nice entry POLO LOUNGE, so I don’t have much of a problem with it. 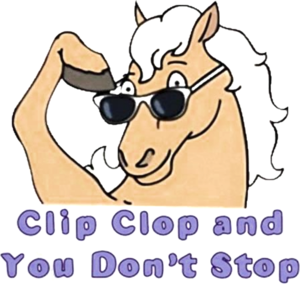 Elsewhere, the long fill is solid with APPLAUSE, HOLDS OUT, and BARRETTE. However, I contend that a horse making the sound CLOP CLOP must be missing a couple legs. Where are the CLIPs? Of course, that first O is used in one of the LOLs.

I’m curious how other folks’ times compare to their usual on this one. As I was solving it, there were a couple of speed bumps I thought were unusually tough for a Monday. Then I came out at the end with 1:51 on the clock, which is pretty fast. Would love to hear whether others had this “feels harder than it is” experience. 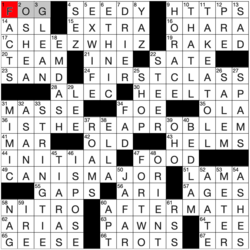 But first, the theme: The revealer at 60A [Consequence, and where the ends of the answers to the starred clues can be found] is AFTERMATH. That is, the final word in each theme answer can be placed after the word MATH to make a two-word phrase.

Other bits I thought were a little tough for Monday: 8D [Red Sox legend, to fans], or YAZ, the nickname for Carl Yastrzemski. Patti does love her baseball, though (see also 20A, [A’s, Jays, or Rays] for TEAM). I was pleased to see HTTPS at 9A; it’s much more common in puzzles to see HTTP, but the latter is well on its way to obsolescence IMO.

Good morning! I’m sitting in for Amy who can’t, well, sit. Or sit well. Or at least comfortably.

When I see Anna’s byline, I always smile. Her puzzles are smooth, elegant, and challenging in a good way when they’re supposed to be. I had to maneuver around a few spots in this one, as I expect for a Monday New Yorker. 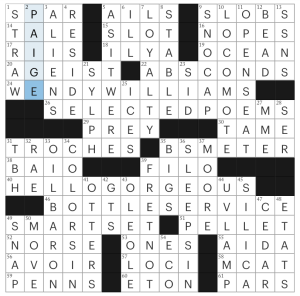 I wasn’t  crazy about LOCOMOTE and it’s a good puzzle that yields only one word for this section of the review.

What I didn’t know before I did this puzzle: as always with TNY, I have choices. I’ve never heard of Vampire Weekend; the only BAIO I know is Scott (turns out they’re cousins). Also not familiar with PAIGE Taylour.

Good morning, folks! Today, we have a symmetrical puzzle with four theme answers, each of which start with an O and end with a T. They are all delightfully conversational (it’s giving Robyn Weintraub Themeless)– ON SECOND THOUGHT, OF COURSE NOT, OH NO YOU DON’T, and OFF TO A GOOD START. I really don’t have a favorite here, they’re all so good. And two spanners! 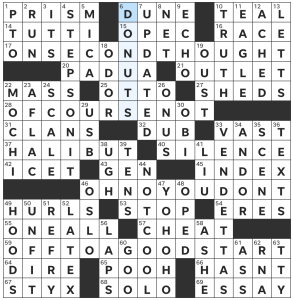 Wendy still managed to work in some long answers, STEPS ON IT and VENDETTAS and even NOT COOL and HALIBUT. I also want to draw your attention to those corners with four five-letter answers in them. It’s actually deceptively hard to get spaces of that size filled so cleanly, so my hat is off to Wendy. The last thing I’ll call out is that I did not really know what a space opera was until this puzzle forced me to look it up! I knew Zendaya starred in DUNE (I never saw it, but my friends said she was drastically under-utilized) but I guess I thought an opera had to involve singing. Google tells me it is simply…. a dramatic story set in space. I propose we call these “space epics.” 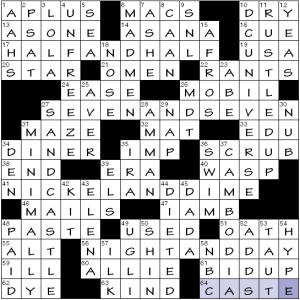 Feel a little cheated by the theme, as the first two relevant entries are more restrictive than the other two.

So you see what I mean, yes? First two clues are just numbers, and the answers are two identical entities. Other two are a bit more expansive. But the math always checks out. 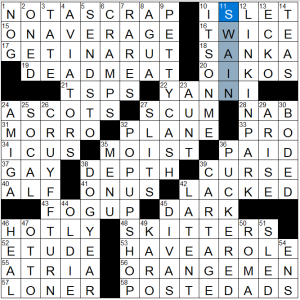 Relatively straightforward from BEQ today, though each of the long downs are in his wheelhouses (sports and rock music) and maybe not yours. 12d in the NE corner features [First rock band to achieve one billion YouTube hits] LINKIN PARK, which I did not know, but recognized with a few crossings, and then 26d opposite is the more obscure CRUYFF TURN [Deceptive about-face move in soccer named after a Dutch player]. Johan Cruyff is a legend of the sport, a centerpiece of the Dutch national teams in the 70s that popularized a strategy called “Total Football,” which emphasized extreme positional flexibility. Imagine an American football team with players able to jump from role to role in the same quarter!

In the opposite corners, I found NOT A SCRAP [1a Quantity of lack of evidence] and POSTED ADS [56a Hung up flyers, e.g.] a touch awkward, but they made sense with the crossings. Not much in the way of big misdirections today; [Lab time unit] for DOG YEAR and [Store for the time being?] for POP UP SHOP gave me a chuckle. MORRO [31a Castle in Havana] is a historical piece of trivia I didn’t know – crossing CRUYFF is tough. Does SOCAL [25d Bakersfield’s spot, for short] include Bakersfield in your book? Not mind, and not a Merced-born-and-raised coworker I was in a meeting with this morning. Southern portion of California, sure. SOCAL? Nah.