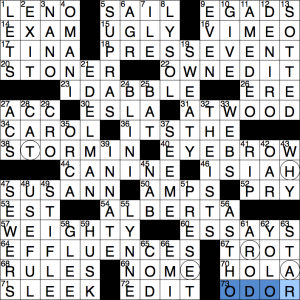 hello and welcome to episode #748 of matt gaffney’s weekly crossword contest, “Crack the Code”. for this week 5 (?) puzzle, matt challenges us to name a well-known number 3. that’s mysterious enough. what are the theme answers? i don’t know for sure, but they surely include the five across answers that contain a hidden number:

here’s the next thing i don’t know: what to do next, with either 71298 or 7-1-2-9-80. i tried the obvious things: looking at numbered cells in the grid (ILEEL or ILEE_, as there’s no square #80), indexing into the nth letter of that answer (fails because CANINE doesn’t have a 9th letter and WEIGHTY doesn’t have an 8th letter, let alone an 80th), converting directly to A-Z using 1-26 code (GABIH or GABI?, as the alphabet doesn’t have an 80th letter either).

replacing the number by its corresponding letter has the interesting effect of turning ST[ONE]R to STAR and W[EIGHT]Y to WHY—interesting because STAR and WHY are words. but of course, PRESGT, ABOD, and CAI aren’t words.

well, i still don’t know what we’re doing with the numbers themselves (i guess nothing), but reading off the five replacement letters in order gives EARTH, which is indeed a well-known number 3, in the list of planets ordered by distance from the sun.

i don’t quite know what to make of this meta. it’s certainly interesting that you can take these in-the-language phrases that hide a number, and replace the number by a single letter to get words. on the other hand, it feels unsatisfying that the value of the number itself isn’t used for anything, and i’m also not thrilled with the inelegance of the EIGHT/EIGHTY ambiguity; maybe that could have been WEIGHTS -> WAS. i think the whole thing would have been very elegant if the pattern of 1=A and 8=H could have been maintained for all of the themers, because that is really neat—but even matt can’t always bend the english language to his will. as it was, though, this felt a bit ragged, with the unused digits being a major loose end, unless i’m just missing something.

matt wanted us to rate this meta for difficulty. i guess i’d call it a 3. the first step is pretty obvious, and the next one utterly eluded me on the first pass. i had to set the puzzle aside for the entire weekend and come back to it. maybe it’s a 3.5, since i’m not sure how natural it is to think of replacing the digit with a letter—but it certainly does help that in two instances you’re replacing the digit N with the Nth letter.

the grid is kinda meh. i was very surprised to see the spanish partial ES LA on top of the english partial IT’S THE in the center of the grid. not only are foreign language partials and six-letter partials both quite rare, but those two phrases are also exactly the same! it felt like an astonishing coincidence that ought to be meta-related except it obviously had nothing to do with the hidden digits. the tied-for-longest answer EFFLUENCES was non-thematic, and as such it was pretty disappointing that it was an unusual plural of an already somewhat exotic word.

well, that’s all i’ve got. what did you think of this one?