Theme: Familiar two-word phrases have an added CO at the start of each second word. 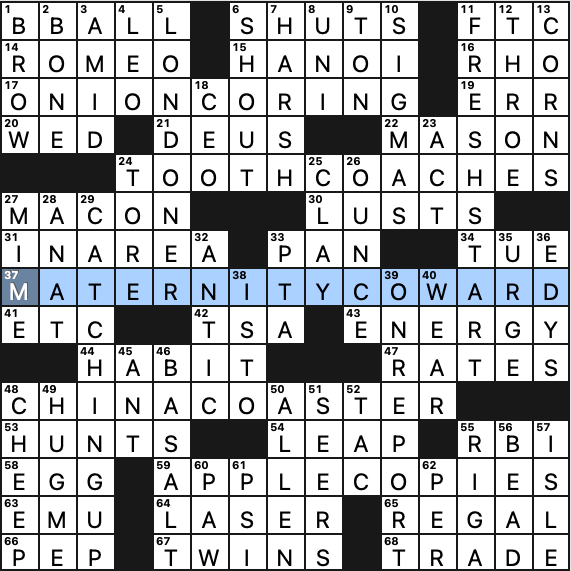 This works well enough for me. I did wish that instead of CO in each case, we had different actual companies, like IBM, BMW, IKEA, etc.

I enjoyed the long fill, especially FRESH START and CATCHING UP which seem to go well together. LONDONER and ON REPORT are good as well, though I tried ON RECORD first for the latter. 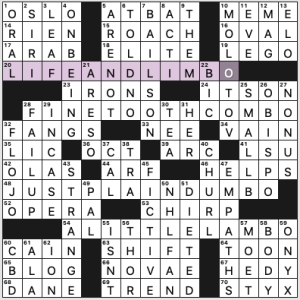 Familiar phrases ending with MB pick up an extra O, changing the meaning:

Fave fill: FAIL UP, BAILS ON, FLOJO, Ukraine’s essential MOLOTOV cocktail. Not so keen on the ARE NOT/ARE SO overlap, with or without the linked clues, along with and LIC., plural OLAS, and TOLD NO. NON-U.S. feels tenuous to me.

Never heard of: 4d. [Peabody Award-winning radio show about spirituality], ON BEING. Apparently it’s a “seasonal podcast” now and no longer a public radio program, but it was on the airwaves until just a few months ago. 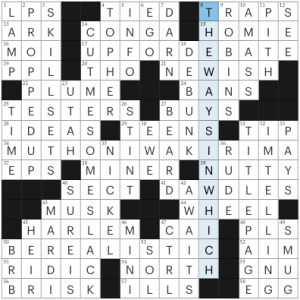 Wednesday New Yorker puzzles are usually easier than Fri NYTs for me, but occasionally they land like this one, a bit tougher. There were two long answers where I had to work the crossings for a long time:

Fave fill: UP FOR DEBATE, DAWDLES, “BE REALISTIC,” “CUT ME SOME SLACK.”

Gen X reaction to 1a. [CD predecessors], LPS—Well, technically, cassettes came in between vinyl and CDs, along with some other short-lived tape formats. Does CASSETTES fit into three squares? No, it does not. 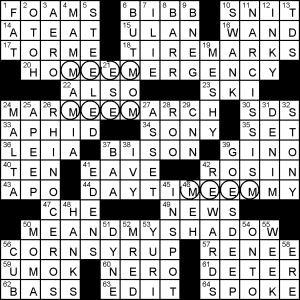 Dr. Ed Sessa’s puzzle features [Soft-shoe classic, or what can be found in the answers to the starred clues], MEANDMYSHADOW which is an interesting way to get to a theme which is 3 entries with MEEM (“em” being the mirror of ME) in their centres. I think this other song is more my speed:

I’m quite impressed that all three MEEM answers feel both interesting and natural:

Not a lot of entries to note for better or worse. I knew [Michael of “SNL”], CHE who is most often seen alongside Colin JOST, but think has shown up surprisingly sparingly. [Mystery writer Nevada] BARR is new to me. Her main series is apparently “Anna Pigeon”, which could show up in an ANNA clue near you! 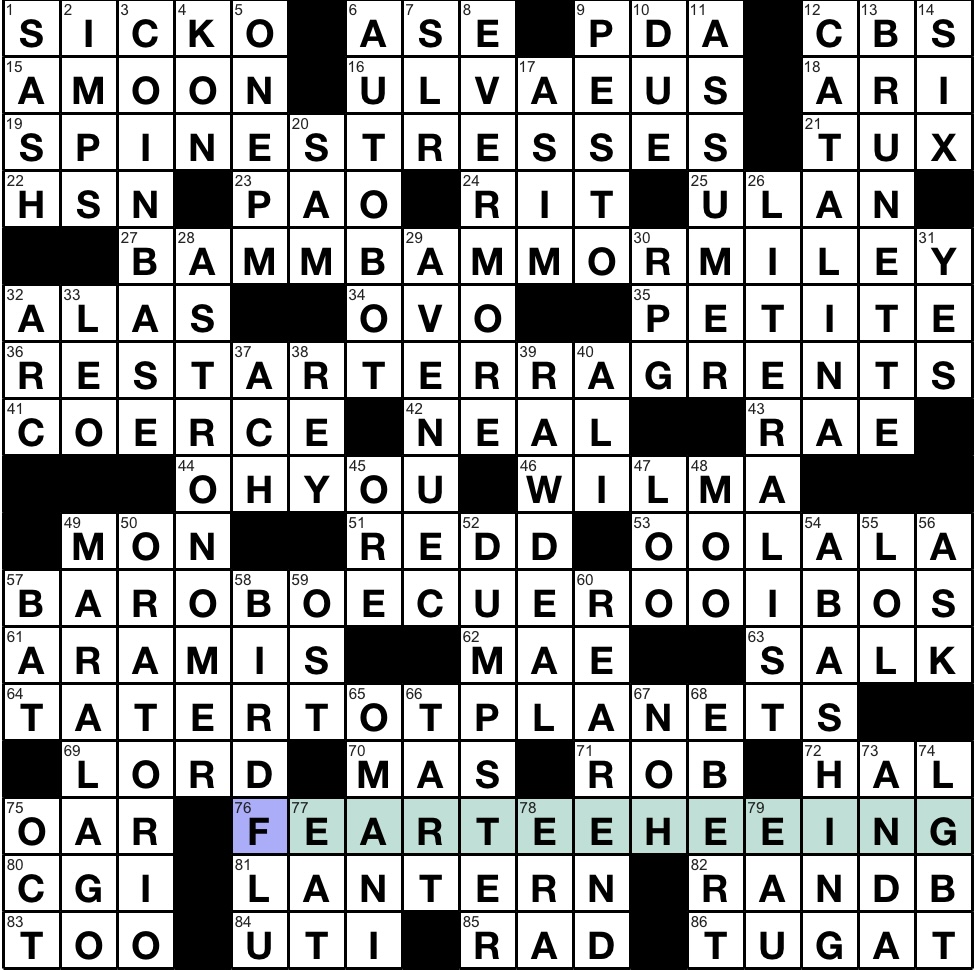 This week’s AVCX Classic from Francis Heaney was a very demanding 4.5/5 difficulty.

Some favorite moments in the grid:

What a fun way to kick off this first week of October! Such a perfect themer set. 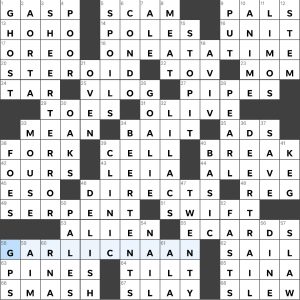 Theme: each down themer contains the word “tree” but upside-down so it needs to be stood upright

A very fall-themed set! How apt for the start of October. The cluing for SHEERTERROR was too subtle for me, as I keep thinking “eerie” or “spooky” or “scared”—maybe a mention about extreme horror or interactive 21+ would have helped with this otherwise fantastic themer. (I’m not one for any type myself, as I prefer the hot apple cider or cocoa and cozy fall movie watching with blankets activities instead of being scared.) BEERTENTS is another great one, though the first half took me longer than it should but I had the second half right away. DEERTRAIL took me the longest and I needed crossings, as I know the term once it filled in but again the first half was tricker for me.

Fun that SLAY and SLEW are next to each other. Though for some reason, I kept looking around for a fourth themer in the NE quadrant or thereabouts. Three is usually the norm but it felt like there could have been one more, not sure why though. Guess the grid just feels a bit weighted in the bottom half due to the design.