There’s nothing to read BETWEEN THE LINES in this puzzle (37a, [Where hidden meanings are found, and where both sets of four horizontal black squares in the puzzle are]). Instead, that’s where you’ll find a “line” of black squares. 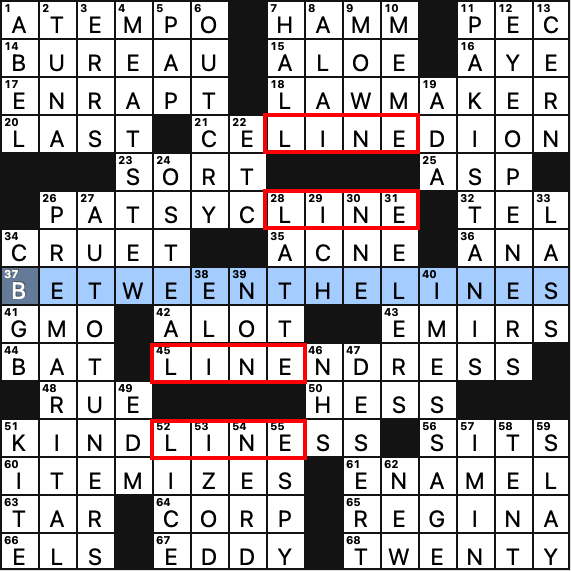 If I was paying attention and trying to sort out the theme during the solve, I probably would’ve focused on the fact that the first two entries are well-known popular singers of their respective times. But I wasn’t, and so the revealer and its theme took me a little bit by surprise.

I will say that it felt a little underwhelming, mainly because, by the clue’s own admission, BETWEEN THE LINES is where you find hidden messages. But instead we get nothing but black blocks. It would have made a fun meta if there was actually a message in there somehow.

That said, I really enjoyed the rest of the puzzle. The long fill is great (PAKISTANIS, EYE OPENERS, PRE-MARITAL, AUTOTUNERS, MEAT STEW, IMESSAGE, and LAWMAKER) and the clues felt fresh without being too hung up on trivia. Some of the usual crossword suspects make an appearance (ALAI, CBGB, OSTEAL, HESS), but all in all it was a fun solve.

The theme didn’t wow me, but the rest of the grid is top notch, especially the long fill and fresh cluing. Four stars. Oh, and it’s a debut, so Congrats are in order! 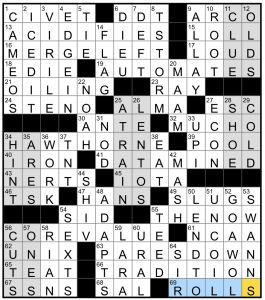 I knew you had to combine the paired themers early on, as I got MERGE LEFT quickly out of the gate, but getting through the rest of the puzzle after that was a grind.  ALTERNATIONS is almost a better revealer, as you can’t actually MERGE the two columns, and are instead forced to just read them from L->R and U->D.  PARES DOWN also wasn’t really necessary, especially after reaching that corner of the grid, but I respect the symmetric revealers.  It’s an impressive feat of construction, given the five pairs of split theme answers had to stand on their own and still leave room for the two revealers.

Cracking: HAWTHORNE — my brother’s namesake, who once said: “Life is made up of marble and mud.”

Slacking: LENTOS — even though it’s technically unclued, and I didn’t have to actually think about awkward plurals of musical direction, it’s still staring at me from the center of the puzzle.

Sidetracking: SHIV — if you’ll pardon the violent imagery, I solved this puzzle on the heels of watching the latest episode of Black Bird, an excellent true crime/prison drama/detective thriller starring Taron Egerton and Paul Walter Hauser.  A great send-off for RAY Liotta.

Perfect title for such a great theme, with excellent bonus fill and flow. 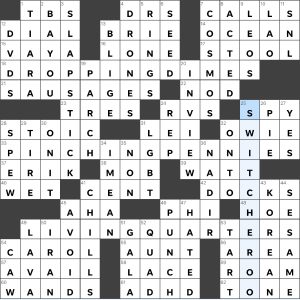 Theme: each themer is phrase that contains a type of coin

DROPPINGDIMES is a new phrase to me so I needed many crossings before I could finish this one. I had PINCHINGPENNIES in mind but I usually think of it as “penny pinching” so was stalled for a bit until the grid began to fill in more. LIVINGQUARTERS filled right in and rounds out the themer set well. Beyond being a fun set, these themers are all two word phrases, with the first ending in “-ing”, though the third is an adjective instead of a verb but it still follows that pattern which is a nice touch. Looking at just the second half of each gives us the coins: DIMES, PENNIES, and QUARTERS.

Stumpers: SPEW (needed crossings, cluing just didn’t do it for me today), VAYA (new phrase for me), and CALLS (kept misreading clue to include “photos” so thought it was about the camera app for some reason)

Check out this grid design! It had a great flow, lovely spacing of themers, tons of bonus fill including a few delightful lengthier ones. Also, visually pleasing to have ONIT and ONTO near symmetry on the grid. A fun collab, indeed!

Good morning, friends! More Caitlin Reid Thursday puzzles, please!! I always have such a good time with her work. Bullets below, because I’m feeling rambly today. 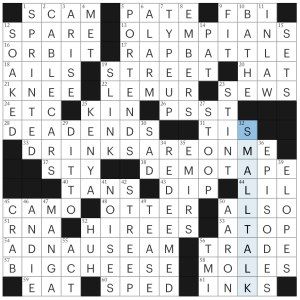 Theme: All the theme answers have words meaning “to burn” spanning two words. 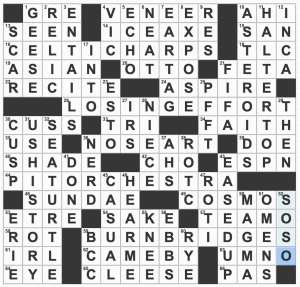 I liked this theme a lot. Everyone knows that circle-related themes are not Universal’s strong suit, but because there was a revealer and all the hidden words spanned the gap between the main two words, it was easy to see them without needing to count letters. LOSING EFFORT and PIT ORCHESTRA were my favorite entries, because not only were they interesting phrases but they contained a 5 letter word, which was impressive.

Given the 5 theme answers, the rest of the puzzle has excellent fill. The middle is a little choppy, but hey, trying to put a long answer there would have a lot of constraints, so I like that the long answers are stacked in the corners. All four of US HISTORY, SEA TURTLE, HALTER TOP, and ASTEROIDS are standout, and they kept my interest in the puzzle beyond the theme.

New to me: TLC’s song “FanMail”, and that Coke can be USEd to clean a toilet. Has anybody tried that??? How did it go?? 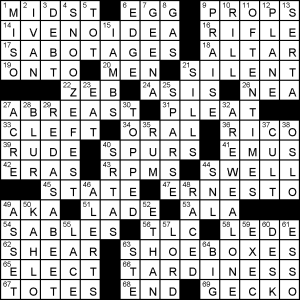 The design of Catherine Cetta’s crossword today mean’s there are no theme entries per se, except the revealing [Stack at Famous Footwear, and a hint to the sets of circled letters], SHOEBOXES. Each of five sets of four letters spell out types of shoe: FLAT, BOOT, PUMP, MULE and HEEL.

Without marquees, there need to some good other entries to prevent this being a [Total yawner], SNOOZEFEST. That answer is one such, as is its mirror answer, [Question for an astrobiologist], AREWEALONE.

Theme: Each theme answer has two words. The first is a body part and the “it” of the puzzle’s title and the second is what it “doesn’t do,” even though, together, they form a common phrase. 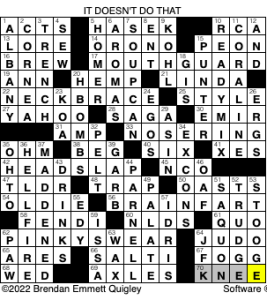 I mean, BEQ is right? Those body parts definitely shouldn’t do those things. I cracked NOSE RING first, and once I got PINKY SWEAR, I cracked the puzzle wide open. I think that MOUTH GUARD and its clue is my favourite themer of the bunch, but these were all really humorous and enjoyable.

The NE corner was the easiest for me to start filling in. I’ve never seen 11d [“2009 stop-motion movie basd on a Neil Gaiman novella”] CORALINE because it spooks me out, but it really helped to open things up, as did 15d [“NFL kicker”] PUNTER. The use of “oriental” in the clue for EMIR is not my favorite; that term is very outdated.

It’s always fun to see TLDR pop up because I think the cluing on it can be really funny, and, sure enough 47a [“‘This email’s a book’ initially”] delivered. I also thought that the inclusion of both IDRIS Elba and ISSA Rae were a fun combo I could fill in one right after the other. Additionally, including 60a [“The Dodgers won it in 2021”] NLDS is super apt, considering postseason baseball is starting this weekend. Let’s go, Guardians!

I had a great time with this puzzle, and I’m sure going to think more critically about phrases with body parts in them from now on.

Vowels are back! This one was right in my wheelhouse. I suspect it wasn’t blazingly hard even for folks who are not familiar with the books in question.

We have circles in our theme answers. 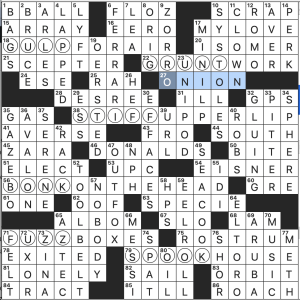 What do all these things have in common? The revealer tells us with a Peter Gordon Trademark Ridiculously Long Clue. It’s so long that Peter included it in the Email for AcrossLite solvers (although it showed up fine in Black Ink) and that gave the game away for me. I appreciate it anyway, since I was able to cut and paste and didn’t have to retype the whole thing. 86a [Writer Mary who has written six books with single-word titles (highlighted in this puzzle) whose subtitles, in order, are “Adventures on the Alimentary Canal,” “The Curious Science of Humans at War,” “The Curious Lives of Human Cadavers,” “The Curious Coupling of Science and Sex,” “When Nature Breaks the Law,” and “Science Tackles the Afterlife”] is ROACH. The circled words are the titles that match each sub. I’ve read GULP, STIFF, BONK and her book about space, which doesn’t fit the theme – it’s “Packing for Mars.” If you’re interested in an enjoyable, accurate, fairly superficial romp through a scientific subject, she’s worth looking up. I particularly enjoyed STIFF, but then I have what some would say is an unnatural interest in death and we read it for a work book club when I was working in hospice.

The theme was fine; the rest of the puzzle was nothing special, and there was one really nasty crossing. 28a [Mononymous singer with the album “Supernatural”] crosses 19d [Unit of magnetic field strength]. The answers are DESREE and OERSTED. My husband studied geophysics as an undergrad so I asked him. He said “I’ve heard the word. Can’t remember what it measures, though.” The word I know is “gauss” which is the SI term. I think that qualifies as “obscure” and the crossing as “unfair.” I got it by stubbornly running the alphabet.

What I didn’t know before I did this puzzle: see above re: FUZZ BOXES and OERSTED. I also did not know (or probably knew at one time and forgot) that ONION beat Secretariat at the 1973 Whitney. And I’ve never heard of DESREE. That doesn’t mean she shouldn’t appear in a puzzle; it does mean that I expect the crossings to be less obscure.