This week we’re looking for a six-letter word. There were six theme entries with clues beginning with “One of…”

I spotted an obvious (and doomed) rabbit hole very quickly: MCFLY, clued as “Back to the Future” surname. (Doc) BROWN is another “Back to the Future” surname, and BROWN is an Ivy League school. I was pretty sure I had the theme… and then spun  my wheels for a long time. LIMP (clued as “Walk with a hitch”) sort of matched (the month of) MARCH, but that was a pretty weak link. And nothing else worked.

I tried other ideas, got nowhere, and selected OPTION as my Hail Mary guess (six letter synonym matching “alternative”). Then I collaborated with a solving friend who was also stuck. We kicked ideas around, and he found the rabbit: each theme entry had an alternate answer that was the same length: WASHINGTON/EISENHOWER, THURSDAY/SATURDAY, etc. We triple-checked for ambiguity (studying lists of Shakespeare plays, U.S. presidents, etc.), and there was none. Each theme entry had exactly one match of the same length. The first letters of the matches formed the nonsense string ERSOOH. We tried anagramming that and got nowhere. 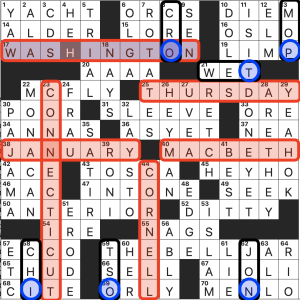 So we needed to find step three, and we did. There were six 3-letter grid entries that contained the first letter of a themer and its match (in order), leaving the third letter:

The final letter of each three-letter entry spell OPTION, our contest solution (and my Hail Mary guess). Tough meta, but fair. Readers: let me know how you did, and describe the rabbits you chased. And raise a glass if you chased Doc BROWN back in time.