Matt Jones’s Jonesin’ Crossword, “Round and Round” – Erin’s write-up 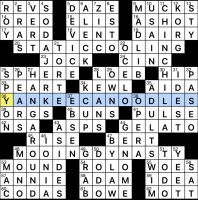 Theme entries are familiar two-word phrases or compound words whose first words are rough synonyms of “split,” i.e. to break into two pieces. The revealer is FRONT SPLITS (53a, [Gymnastics or yoga maneuvers, and a hint to the starts of 18-, 24-, 35- and 48-Across]). 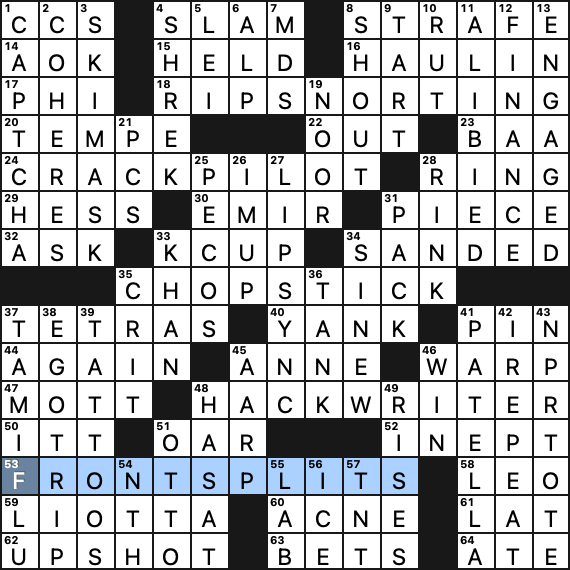 I had a heck of a time discerning this theme because an early version of the puzzle was missing all the Down clues after 11d. That meant as I was beginning my solve, I’d occasionally run across a Down clue that was simply a hyphen, which of course looks like it might be thematic. Once I realized there were too many of these blank clues, I figured out that the clue gremlin struck again. This happens occasionally at the WSJ where the file somehow gets truncated though it remains readable.

Anyway, the puzzle got fixed relatively quickly, so if you solved it any time after that, you had a fairly normal solve.

As far as synonym themes go, this one’s pretty typical. The entries are on the fun side, though as I said, CRACK PILOT doesn’t seem so in-the-language, at least to me.

Nothing longer than a 7 in the fill, but there are some nice ones: CAPTCHA, SKI MASK, LIP SYNC, EGO TRIP, PATELLA, “I REPEAT…,” and NPR TOTE. I’ve never seen ALIBIED or “alibi” used as a verb, so that felt odd. 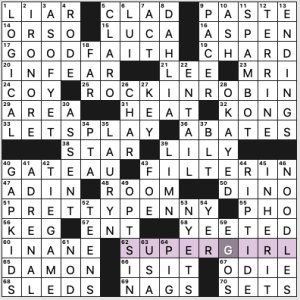 Great theme! It’s subtle and I didn’t understand what was going on till I made sense of the theme revealer: 62a. [Kara Zor-El’s identity in DC Comics … or a punny hint to the answers to the starred clues], SUPERGIRL. Each of the themers combines a synonym for super with a girl’s name. And the constructor is a high school student making her debut … so she’s today’s cruciverbal SUPERGIRL. The themers are:

Mystery item: 9d. [Kind of fitness test for K-12 students], PACER. Never heard of of this. To the Google! Good gravy, it’s an acronym. Progressive Aerobic Cardiovascular Endurance Run. Pretty sure this did not exist when I was in school.

Modern slang that I’ve seen before but am too old to legitimately use: 58a. [Chucked forcefully, in modern lingo], YEETED. As in “I want to yeet every authoritarian leader into the sun.”

Good morning from Gate 20 at the San Jose airport!

I think this is a bit on the crunchy side for a Tuesday. Just me? Travel fatigue? I can’t say precisely why I feel that way, so maybe it is just me. I enjoyed the theme; I noticed the pattern and still enjoyed the wordplay in the revealer. 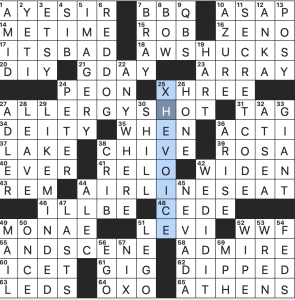 And the revealer: 65a [Capital of Greece, or a three-word hint to the answers in the starred clues] is ATHENS – A THEN S for the starting letters of the two words in each theme answer.

Since I don’t feel like digging my power cord out of the suitcase, I’ll skip right to the end. What I didn’t know before I did this puzzle: that Carson Daily hosts THE VOICE. 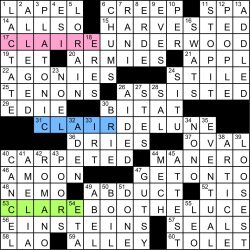 Hello there, everyone! I hope you are all doing well as we head into the middle of October.

Today’s puzzle features fun with homophones, as the first word in the three theme answers are all pronounced the same but spelled differently.

Got slowed down a lot in the Northwest when I immediately put Toledo after getting the first “O” and not coming off of that for a long while until realizing something was amiss — despite Toledo being perfect for that clue, even with LORAIN being the word that had to fit with this particular grid (5D: [Lake Erie port city]). Loved the clue for EINSTEINS, though I’ll never be mistaken for one anytime soon (56A: [Wise guys?]). Anyone else see CREEP and then immediately think of the hit Radiohead song (6A: [Lowlife])? If not, then here it is. This was definitely a popular tune in bars of college towns, as I’m sure it is still a hit in those establishments right now.

“Sports will make you smarter” moment of the day: ROMANO (42D: [TV comic Ray]) – Unfortunately, the Toronto Blue Jays being eliminated from the MLB playoffs this past Saturday ruins the perfection of the timing of this entry, but we’re still going to give Blue Jays relief pitcher Jordan Romano some love here. Romano, born in Markham, Ontario, became the Blue Jays’ closer last year and continued his success in closing out games in 2022, earning his first-ever All-Star Game appearance this past July. On October 2, Romano earned the save for the Blue Jays in a game in which Brampton, Ontario-born Zach Pop earned the victory, marking the first time in Toronto Blue Jays history in which Canadian-born pitchers earned both the win and the save in the same game. (The Blue Jays’ first season in MLB was in 1977.) 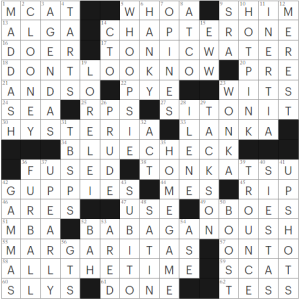 This was a perfect solving experience for what’s advertised as a moderately challenging themeless crossword puzzle.

Every time there was significant resistance—which was rather often—there were nearby entries that were able to help, after they themselves were populated with a new letter or two. This process occurred over and over during the solve, so it was truly a matter of ‘working’ the puzzle.

Editor:  Anna Gundlach and Erik Agard
Theme: Each theme answer is a person whose last name is a fruit. 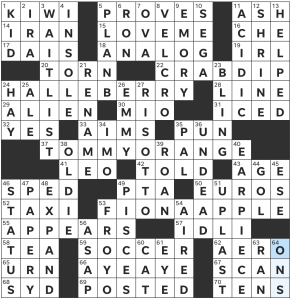 This theme reminded me of the “Bore Fruit” NYT puzzle from last year, which also used HALLE BERRY and FIONA APPLE as theme answers. However, since all the answers are real people in this one, it feels effectively different, and I liked the title a lot. I have never heard of TOMMY ORANGE – for a while, when I had xANGx at the end of the word, I wondered if I might be dealing with someone with the last name “mango”! Luckily the other people I was able to drop in just from the clues without any crosses.

Favorite answers: VELCRO, FRO YO, having both LEO and PISCES in the puzzle

Favorite clues: 3d [Series of names on standby for a brunch spot] for WAITLIST, 23d [“The ___ Ring” (satirical crime movie)] for BLING, 36d [Like some zom-com characters] for UNDEAD (although I wish the clue had gone full “Warm Bodies” and said “zom-rom-com”)