Theme answers consist of familiar phrases whose first words can also have something to do with golf. The second words also change meaning from the original phrase, thus each clue gets the wacky treatment. 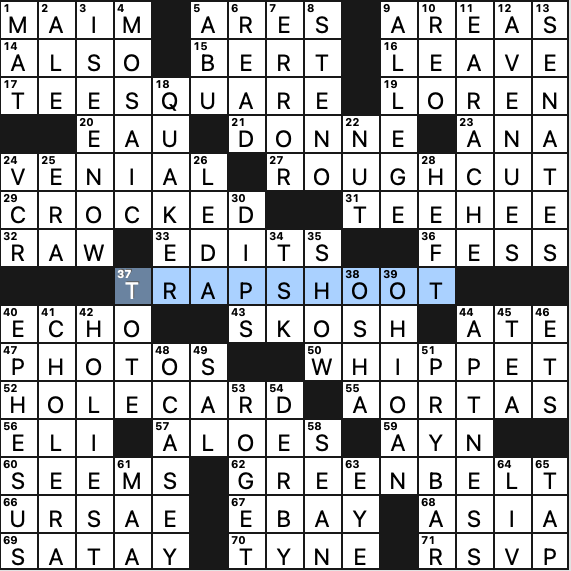 Not a bad theme. I do like the wordplay. But that first one irked me, especially when “teetotaler” (Person doing sums on the golf course?) is available. (GREENBELT could be pluralized to compensate.) And TRAP SHOOT sounds weird as I expect most people involved with the sport would use the phrase “trap shooting.”

Similar to yesterday, we have nothing longer than a 7 in the fill, but there are still some highlights: “I SEE NOW,” EARACHE, WHIPPET, EPHESUS, CHOLERA, plus QUAKER, TEE-HEE, MOSAIC, and PRY BAR. Needed all the crossings for Irish writer Seán O’CASEY [“The Plough and the Stars” playwright] as well as CROCKED [Blotto].

First up, a note to the NYT’s puzzle-editing team: Have you folks ever watched TMC, The Movie Channel? TMC is showing the schlocky exploitation flick Wild Things in the wee hours tonight. Is that something cinephiles watch? [Cable option for cinephiles] suggests it’s a channel for lovers of art films, classic films. The clue evokes TCM, Turner Classic Movies, which actually is a cable channel beloved by cinephiles. A friend of mine is a huge TCM junkie! She was friends with Roger Ebert and had a film blog. …I daresay she doesn’t spend much time watching TMC. Please stop pretending that TMC = TCM, unless you’re cool with misrepresentations. Heck, you could clue OTT as a hockey player or ORR as a baseball player, if you want to go that “it sounds kinda the same, what’s the difference?” route. 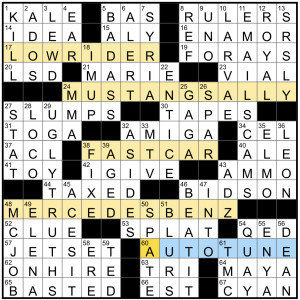 Moving on to the rest of the puzzle. Cute theme! The revealer is [Modern music staple that’s a punny description of 17-, 24-, 38- and 48-Across], AUTOTUNE, and those four themers are car songs: LOW RIDER, MUSTANG SALLY, FAST CAR, MERCEDES BENZ. Certainly there are some other notable car songs, but these ones are all classics, and I like that none of the artists represented here are white men. Given how much harder it was for so many other groups to break out in the music biz, it’s good to see these successes.

Fave fill: UGLY TRUTHS, BADASS, SRSLY. Not sure how I feel about EMAIL SCAMS as an entry. Overall, though, pretty smooth fill.

Four stars from me. I’m not holding that TMC clue against the constructor. I’ll note that a recent New Yorker crossword went the same route! Friend of mine has this as a crossword pet peeve, and perhaps putting this out there into the blogosphere will raise some awareness? 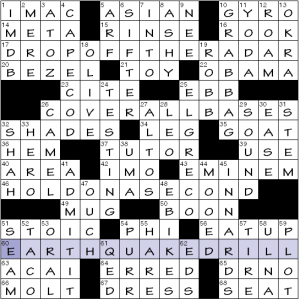 Pretty sure our constructors reside in California.

So that leads to “Drop, cover, [and] hold on”, which seems like plausible advice. Being an Eastcoaster that phrase is less familiar to me than, say, “Stop, drop, and roll” for fire mitigation.

Fun theme with a great grid and an abundance of excellent bonus fill and entries! 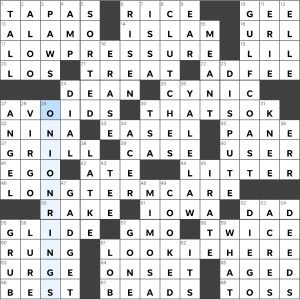 Theme: each themer starts with LO- and ends with -RE, splitting up LORE (the “broken story”)

As a set, the themers are a wide range of phrases today but all perfectly fit the theme. Each took me some crossings today before being able to complete them all—how about you? LOWPRESSURE is usually something I associate with weather but is a great fit, although “low stakes” came to my mind first given the cluing. LONGTERMCARE took me longer, as I was trying to think of specific examples. LOOKIEHERE once filled in immediately made me think of Robin Williams’s Genie in Aladdin, though I thought it might have been “look at this”.

Stumpers: EASEL (thinking “tripod” and “stool” with recording studio in mind instead of art so took crossings), TREAT (“break” was first instinct), and CLUTCHES (“grasps” and “clings to” initially came to mind)

Lots of delightful bonus fill as well as many tasty entries including (and not already mentioned) GRUB, RICE, ALOO, TREAT, ATE, GRILL, and COOKED. 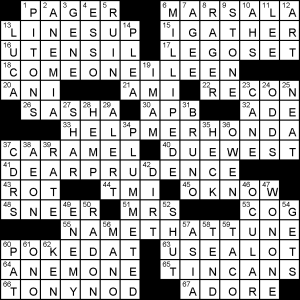 Amie Walker’s crossword today is beautiful in its multi-layered intricacy. I wish it had a fourth example rather than limping in on a “revealer”, but I’m guessing the constraints were too onerous. Each of three phrases – [Protest song], [Backing Track], [Opening Number] – use different synonyms of tune that are common phrases – but then applies them literally as clues for old pop songs. These are COMEONEILEEN by Dexy’s Midnight Runners, HELPMERHONDA by the Beach Boys, and DEARPRUDENCE by The Beatles. It finishes with [Revived game show hosted by Jane Krakowski that’s also an apt title for this puzzle], NAMETHATTUNE. 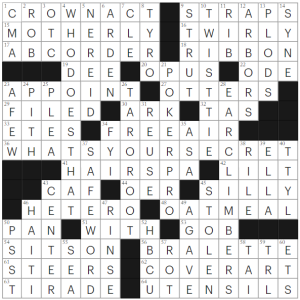 New to me: EAR CLIMBER. A newer jewelry option that kinda makes it look like you’ve got multiple piercings in that ear.

Generally smooth fill, lots of flavor in the clues. Four stars from me. 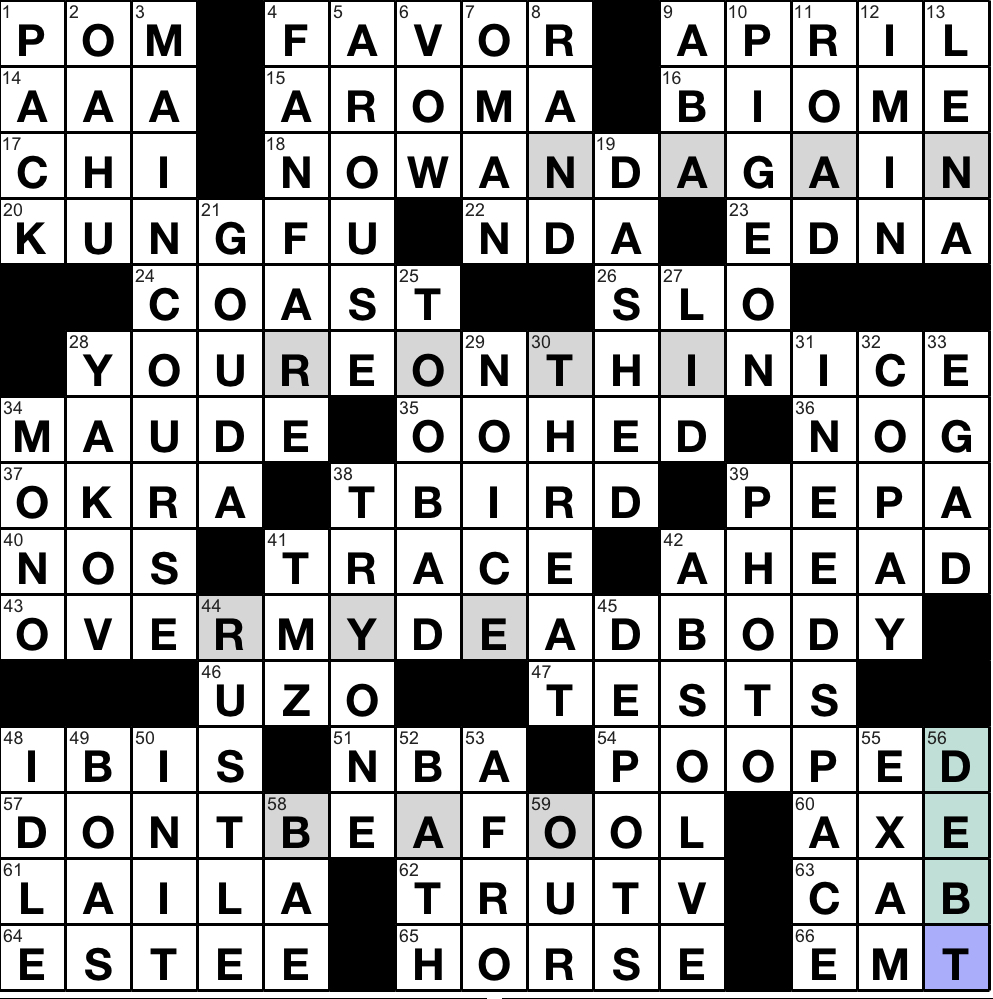 This week’s AVCX Classic from Becca Gorman was a delicious 2/5 difficulty.

The title had me immediately think of sliced bread, to find them theme doing just that – we have NAAN, ROTI, RYE, and BAO hidden in the themed answers. I would’ve liked to see a revealer in the grid, but the title gave us all the information we needed about the shaded squares so it was still an enjoyable solve. I was also impressed with the spacing of the slices, which made the bread feel sliced rather than just randomly scattered. The grid was super smooth as well, with clues and fill that worked really well.

And in honor the ‘Hacks’ clue for NDA, here’s a great scene from one of my favorite shows