Matt here filling in for joon, who’s waterskiing on Lake Manitoba this week. 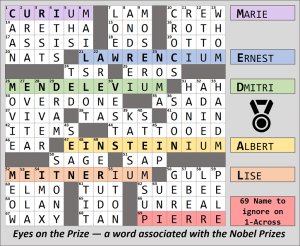 Five chemical elements in the grid, each named for a famous person: CURIUM, LAWRENCIUM, MENDELEVIUM, EINSTEINIUM, and MEITNERIUM. What to do with these?

The hint comes at the last Across, PIERRE, which is clued as [Name to ignore on 1-Across]. CURIUM is named for both Marie and Pierre Curie, so sounds like we’re supposed to use MARIE. And then we’d naturally want to look at the other elements’ namesakes’ first names:

MARIE Curie (Curium)
ERNEST Lawrence (Lawrencium) — don’t feel bad if you had to look that one up; so did I. He had great hair, though
DMITRI Mendeleev (Mendelevium)
ALBERT Einstein (Einsteinium)
LISE Meitner (Meitnerium)

And a reminder that there are no coincidences: the 2022 Nobel Prize for Chemistry went out to one Morton MELDAL the day this puzzle was published. Remove one letter from his surname and you get this week’s contest answer.

You know how many calls to Stockholm I had to make for this to happen? Five or six. It was exhausting.

This entry was posted in Daily Puzzles and tagged Calls to Stockholm, crossword contest, Matt Gaffney. Bookmark the permalink.