Note: Fireball is a contest this week. We’ll have a review after the submission period closes.


Peter A. Collins’s Wall Street Journal crossword, “Can I Get In on That?”—Jim P’s review

Theme: The letter I is added to familiar phrases, resulting in crossword wackiness. 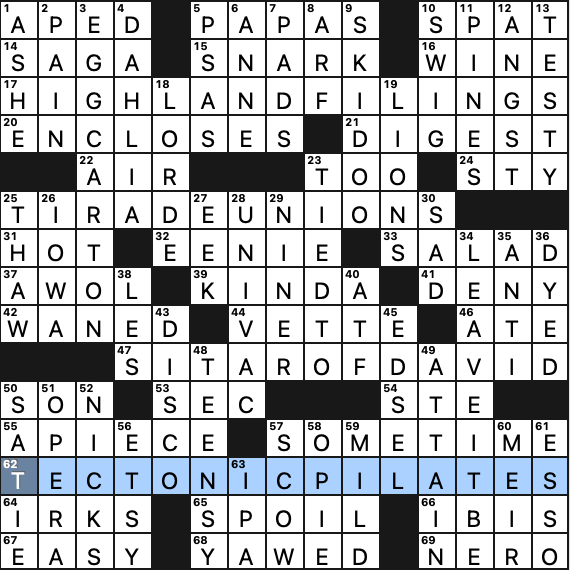 This would have felt much more elegant to me without the other I’s already present in the original phrases. That said, I appreciate the consistency in finding words in which the added I’s go in the second position. Since there are myriad ways in which one can add an I to a word to make a new word, this constraint limits the theme and gives it some focus. And that said, I really only enjoyed the last entry; the others didn’t do much for me.

I did enjoy EGG CARTON and the quaint-sounding “LEAVE IT BE” in the fill. I kept trying to make ENIAC fit where UNIVAC belonged. 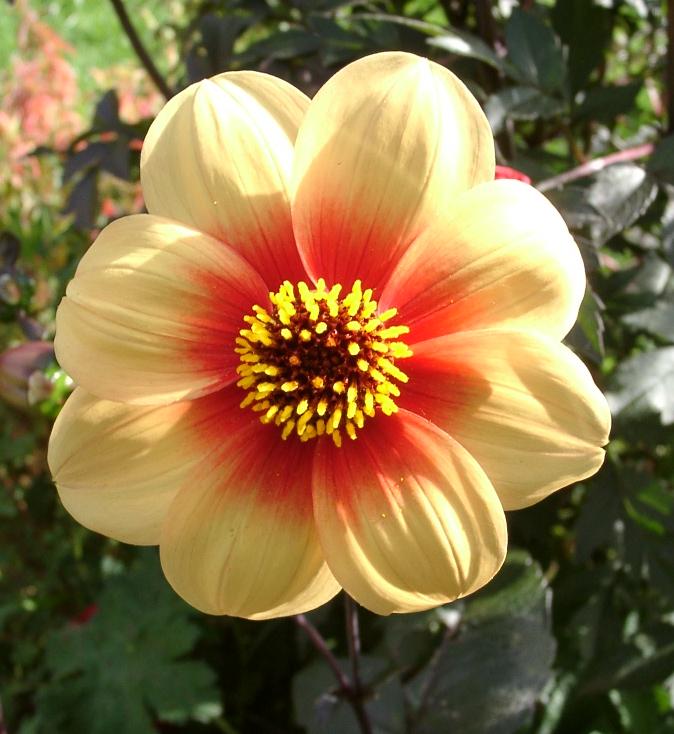 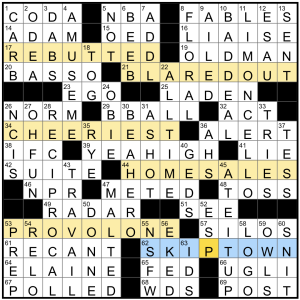 Another puzzle that speaks to my inner road trip fanatic.  Saw BUTTE pretty quickly, went straight to the revealer, and was able to figure out what was going on before leaving the NW corner.  In fact, this would have played really easy (6-7 minute range, close to a PB for a Thursday), except I spent as much time in the SW as I did on the rest of the puzzle.  Really wanted RECIPROCAL to be REVERSIBLE, and did not know ELAINE Thompson-Herah.  Struggled with John DONNE, MALTED Milk, TRAVAIL.. nothing too unreasonable, just couldn’t see anything for the longest time.

I wonder if this would have been better as a 21x, as longer theme answers may have allowed the “skipped” phrases to be more colorful (no pun intended) than RED, BUT, LONE, etc.  Still, kudos for the dense theme material and Americana flavor.

Cracking: LIMONCELLO — delicious.  Tried to make my own once when returning from Sorrento.  Did not work out.

Slacking: WDS — an unusual instance of ugly fill that has appeared primarily in the Shortz era (25 times) and rarely before that (once in 1989, once in 1979).  And it’s not like RSS, or PDF, or something that was waiting to be invented before being put to xword use.

Sidetracking: OLDMAN — reportedly set to reprise his role as George Smiley in “Smiley’s People”, having first played the part for “Tinker Tailor Soldier Spy”.  Now all we need is a proper adaptation of “A Perfect Spy”, perhaps one of the five greatest novels of the 20th century.

Theme: All the theme answers start with the name of an evil DR. 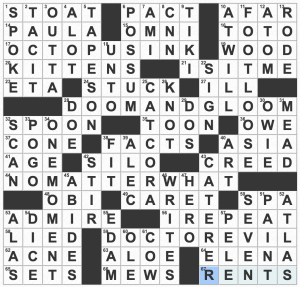 Great title today! We’ve got Dr. Octopus from Spider-Man, Dr. Doom from Marvel, and Dr. No from James Bond – who knew there were so many evil doctors with last names that were common words?? OCTOPUS INK threw me off a little bit because I have almost always heard his name as “Doc Ock” or “Dr. Octavius”, but the internet tells me that is in fact his full name. I didn’t see the theme until the revealer, but once I did it felt very clever.

Other random thoughts on the puzzle: 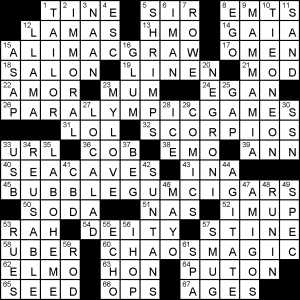 Today’s puzzle by Amanda Rafkin features a revealer that I don’t know much about. Scarlet Witch apparently wields CHAOSMAGIC, which is used to indicate a cryptic style scrambling of the letters in MAGIC, found in the middle of several answers. So: 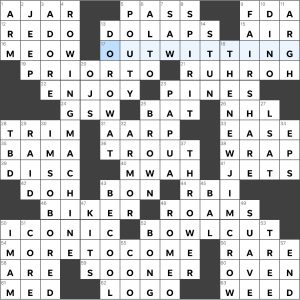 Theme: the word ROW is in each down themer, moving downward from top NW to the SE.

Most of the themers were partially filled, given that I start with across, so they filled in more easily. ROWINGMACHINE starts off the set getting solvers ready for a (mental) workout. For me, DOROWAT is delicious and filled right in for me though I do prefer fir fir from our local restaurant. The Abolitionist John BROWN was known for his final speech at his trial. THROWER is new fill for me though had fair crossings to give me enough to complete it without a struggle. THENEWJIMCROW is a non-fiction work that has an impressive Wikipedia page for anyone wanted a detailed overview including the court cases it covers. In addition, the word ROW begins at the top of the grid in the first themer with R at the top and moves down the grid (with the next R just below the previous W even!) until the bottom of the grid ends in ROW with the last themer and the final W is at the bottom. The themers also are one row apart, with the third in the middle of the grid. Beautiful construction indeed! Pulling all of this off in one puzzle is truly impressive to me.

Stumpers: DOLAPS (needed a few crossings today), BAMA (needed crossings), and PRIORTO (this one got me today, especially with 20d for some reason and I also needed crossings for it)

What puts it over the edge for me is how well designed the grid is for this theme—it is so visually stunning to behold. Kudos! This just topped my all-time-favorite puzzles list. The theme, the incredible bonus fill, the grid design–I’ll say it once more, in case it wasn’t abundantly clear: whoa.

Theme: Each theme answer switches out a B and a P for a BIG PUN (aka a PIG BUN). 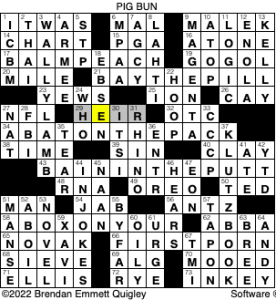 BEQ had some technical difficulties with posting this grid, and I wasn’t able to print the PDF as I’m out of town, so sorry for the delay here.

When I first saw BEQ’s title, I was so curious. Were there going to be oinking creatures involved? While my guess was off base, I thought that this grid was solidly very punny. BAY THE PILL made me laugh, and I thought that A BAT ON THE PACK was worth it, even if it’s a little different from the other themes because it starts with the indefinite article instead of the B of the two switched letters. PAIN IN THE BUTT was also really fun, and figuring out the theme can be helpful even if you don’t now who Barbara Bain is.

I finished the NE corner first, knowing the Across answers in that corner easily, moving from 9a [“Rami of ‘Amsterdam’] MALEK to 16a [“Seek forgiveness”] ATONE to 19a [“‘The Nose’ short-story writer Nikolai”] GOGOL to 26a [“Small, sandy island”] CAY. The SE was also pretty solid, with 62a [“Only Swedish group in the Rock and Roll Hall of Fame”] ABBA and 70a [“Answered the cattle call”] MOOED really anchoring it for me.