I love seeing Robyn’s name on a puzzle! I know that no matter the difficulty level it will be smooth, solidly constructed, and a joy to solve. After this I will also look forward to Beth’s work. The Inkubator staff had it right when they said this one was lightly challenging.

I figured out what was going on with the second the theme entry so I didn’t need the revealer for an explanation. It still added to the fun. 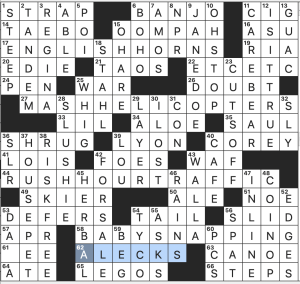 And the revealer: 58a [“You’re going to wake the little one with all the noise around here!” — or a plea for quiet hidden in the starred entries] is BABY‘S NAPPING. Each theme entry contains the string SHH. Cute!

What I didn’t know before I did this puzzle: that Tori AMOS is a spokesperson for RAINN. For those who don’t know, RAINN is the National Sexual Assault hotline. Info here. The number is (800) 656-4673 and they have chat available at online.rainn.org. 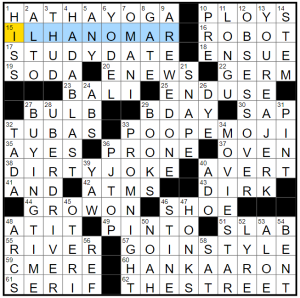 Not sure if I like PJ TOP.  I generally say “pajama top” or “pajama bottoms,” with the PJs abbreviation for the complete set or a one-piece sleepwear.

4.25 stars from me. Some of the long fill was clued so clearly (not tricky enough for my taste!), it really didn’t feel tough at all.

Theme: Each theme answer’s outer letters at the beginning and end together spell LAND. 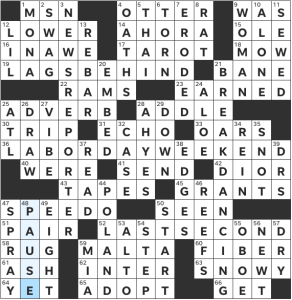 While literally outlandish in their spellings, these themers were really solid. I started to fill in FALL SOLSTICE instead of LABOR DAY WEEKEND at first but quickly realized that that didn’t make sense before putting in LABOR DAY WEEKEND. LAGS BEHIND also fell into place easily, but I had LAST MINUTE instead of LAST SECOND at first. Funnily enough, it was EDGES that fixed it for me, a nice reminder of the need for the answer’s EDGES to spell LAND.

I was kicking myself for not remembering MSN from the start, but I usually flip to Down answers if I don’t get 1a right off the bat. As a result, the crosses filled in the NW corner pretty smoothly. I was sporadic throughout the rest of the puzzle needing some confirmation on 28a [“Bewilder”] because ADDLE didn’t feel right at first. High School Musical immediately started playing in my head as I filled in 40a [“‘___ all in this together’”] WE’RE, and that will ECHO throughout my head today.

This puzzle would definitely 27d [“Pass the ___ check”] VIBE for me. I’m currently at a conference in Chicago, so it was a great way for me to PAUSE for a minute to catch my breath. 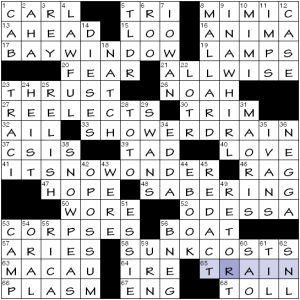 We have a bunch of short entries with the same clue: [Feeling under the weather?]. They are each situated directly beneath a segment of a longer entry that can be parsed as weather phenomenon.

Couldn’t help noticing: SHOWER is also a type of weather, 65a TRAIN contains RAIN, SNOW PEAS crosses IT’S NO WONDER, and that three of the four sets are four letters long, and one is but three letters long. Mostly these are distracting than dingworthy.

In a rush today, so I’ll just hit a few notes:

Theme: All the theme answers “take” their clue number as the first word of the answer. 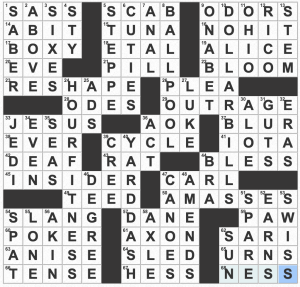 Sophia here filling in for Jim on this lovely Friday! I liked the puzzle’s concept (felt like a much much simpler version of Francis Heaney’s Lollapuzzoola crossword this year, iykyk). I wish the answers themselves had been a little snazzier – there’s only so much fun you can have with TEN DOLLAR BILLS – but as a constructor I know how ridiculously annoying it is to build a puzzle around specific answer numbers, so it’s a very minor ding as all the theme answers are very legitimate things.

Quick hits on the rest of the puzzle: 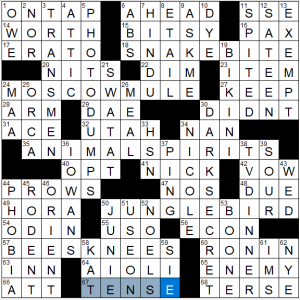 A lovely theme for a Friday, with cocktails reminiscent of the animal kingdom united by the revealer ANIMAL SPIRITS. My usual Friday afternoon spot has a “Russian Donkey” on the menu – a play on MOSCOW MULE, with bourbon instead of vodka, but I didn’t order that today. Back to the puzzle, briefly, because it’s been a week and I have a 6:00 AM flight:

The clue is more straightforward today, but does anyone else feel that ETAIL is the new ELOPE? Lots of angles for cute clues, but they’re all kind of easy to see and enjoy without tearing your hair out until the misdirection clicks. By contrast [Free (from)] for EXEMPT is an angle I’ve seen more frequently, and my brain hasn’t yet accepted that meaning of EXEMPT to put it in without crossings. I’m unfamiliar with the Junaluska community [53d], but I much prefer Boone and the surrounding area to Asheville, so I’ll learn up before our next weekend getaway to that part of the state. Grateful Kyra and Sophia for introducing me.