I had a pretty good guess at what the theme would be by pondering the title, but it was still fun to play it out. The revealer is DROP TROU (62a, [Moon, or what three answers in this puzzle literally do]). The letters TROU drop from the Across direction to the Down direction before the entry completes horizontally. 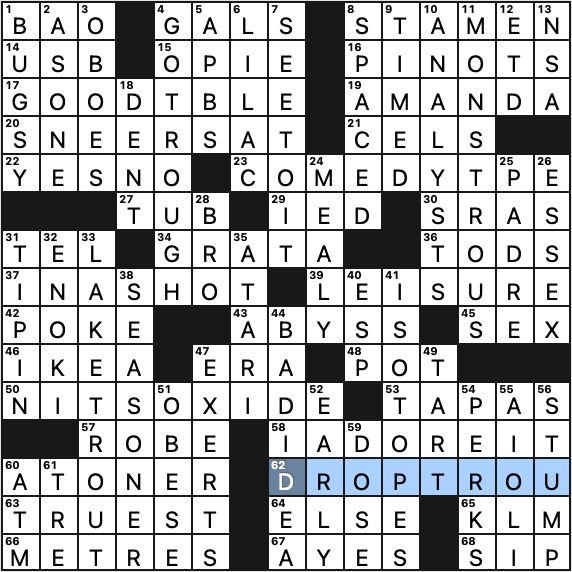 Very nice, eh? And those long crossers are lovely as well. I wouldn’t say “I ADORE IT,” but I certainly enjoyed the solve.

With long crossing theme answers, there are some trade-offs in the fill. Thus we get entries like SNEERS AT, IN A SHOT, SEASONER, and ATONER. While I did notice them, they served the theme, and it felt worth it. Plus, there were goodies like the aforementioned “I ADORE IT!,” “SEE TO IT,” “BAD IDEA,” ANALYSTS, and LEISURE. Didn’t know [Luxury shoe brand] TODS, but maybe I’ve seen it before in the WSJ puzzle.

The title really helped me out this time. Each theme answer contains a rebus with the name of an animal packed into one square. 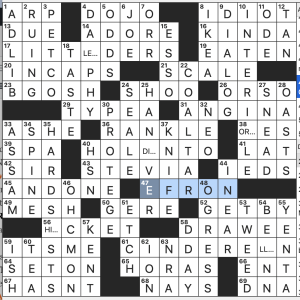 The first and last are viciously difficult crossings – one old movie crossing an 80s baseball player and one less old but still not new movie crossing an author who died in 1945. I guess it helps a little to know there has to be an animal in there somewhere. I like rebus themes. I especially like rebus themes that are not precisely symmetrical and don’t have the same string of letters in each rebus square. I enjoyed this one and I still think it bordered on unfair.

What I didn’t know before I did this puzzle: see above re: DALE MURPHY and Henry BELLAMANN. I also did not know that Zac EFRON appeared in “The Greatest Beer Run Ever.” 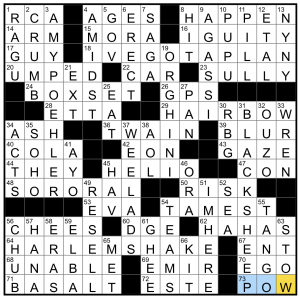 Started to look for EWE hidden across three black squares (ala Evan Kalish’s DARK ART puzzle, for example), then realized a) the BLACK SHEEP are also rebuses, and b) we’re looking for a RAM, a EWE, and a LAMB.  The “-” clues are a giveaway, so it didn’t play too difficult.  The real coup de grace would be finding themers whose split components can stand alone so that they don’t have to be clued in a way that points to the premise, but that’s always a pretty tall order.  There are great long non-theme entries here, including AMY POEHLER, I’VE GOT A PLAN, and…

Cracking: HARLEM SHAKE — this was a “meme” and “went viral” when there were still people who genuinely hadn’t heard those terms yet.  Get ready to feel old: it’s almost been a decade.

Slacking: SULLY — not because of the word itself, but because when someone lands an airplane on the Hudson River and single handedly saves all 155 souls on board, he gets to be the only way we clue SULLY from now until the rapture.

Sidetracking: TWAIN — know who won the TWAIN Prize in 2013?  None other than CAROL BURNETT, whose scene-stealing turn as Marion was a highlight in the incandescent final season of Better Call Saul.

Good morning, folks! I was intrigued by this layout, which doesn’t seam to have many long answers. There’s a spanner, a nine-letter entry across the middle, and then a total of four ten-letter entries, but that’s it. I’m used to seeing themeless grids with 10-15 long entries, not just five. It’s also unusual to see those staircase shapes in a grid with 72 words. All of these are things that jump out to me now that I’ve been constructing puzzles for two years, but I never would have noticed them before. 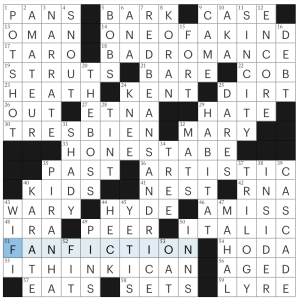 I loooved all of the ten-letter entries, hell yeah FAN FICTION and BAD ROMANCE. I THINK I CAN and ONE OF A KIND both have an interesting property where they feel much longer than just ten letters because they are both four-word phrases. RED BEANS AND RICE was nice to see because I just finished planning a Dinner Party Menu with my sister, and I will be bringing beans & rice (pinto tho– frijoles charros– not red beans) (and batched whiskey sours).

And I was so impressed by the fun short entries as well! WIFI next to KARATE next to PIRANHA! TRILOGY next to INSIDER next to CASCADE! SIN CITY and THE BOSS! Caitlin is one of my favorite constructors and this puzzle was another reminder of why.

Theme: In each theme answer, the H of a common phrase has Become an O. 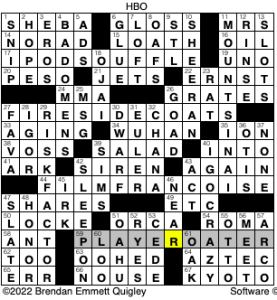 I thought that this was a really fun theme. I love the wordplay in H-B[e]O and the choice of theme answers. IPOD SOUFFLE made me miss having an iPod. It was FILM FRANCOISE that made me crack the themes, and it was very helpful in solving both PLAYER OATER (since I was unfamiliar with what an OATER is (a western)) and FIRESIDE COATS.

I feel like I flew through this puzzle. The top half fell into place pretty easily, especially with BAD OMENS and MOUNT SINAI opening up longer swaths were I might otherwise have stumbled longer. Knowing 18d [“City in California’s Ventura County”] OJAI was useful in figuring out 21a [“Football team originally called the Titans”] JETS. Speaking of sports, 9d [“Letters on Albert Pujols’s cap”] STL was a nice nod to the retiring Cardinals player. NONE was a funny tease in 37a [“Number of World Cups Portugal has won”].

Overall, this was a really fun puzzle! 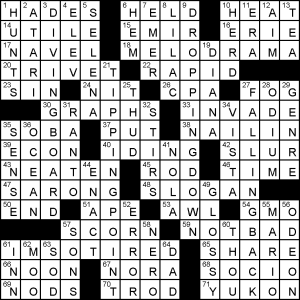 There are two different things going on in the theme of today’s puzzle by David Alfred Bywaters. There are four phrases starting with words that roughly imply downward movement running down: DIVING, TIPPING, DROPPING and FALLING. The second part is the clues are reimagined in various ways. The two parts don’t quite come together for me…

Tricky for me today but still a fantastic puzzle with an awesome theme, fun themer set, and impressive bonus fill. 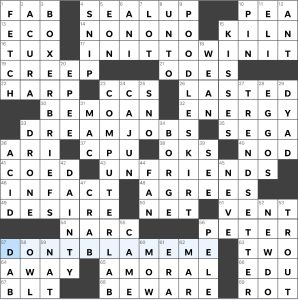 Theme: types of dogs either start or end each themer phrase

BOXERBRIEFS is not an obvious dog per se but it starts with BOXER. POODLESKIRT is a classic that is also iconic and starts with POODLE. Then we move on to COMPUTERLAB, another gimme for me since I grew up with them throughout school, which ends in LAB. TRENDSETTER also slotted right in and ends in SETTER. What a doggone good set! Plus, the two in the upper half of the grid start with a type of dog which the two in the bottom half end with them. Visually it’s also fun from left to right that they alternate top and bottom (“under”). So many delightful things going on with the theme today!

At first, given the lengty across bonus fill, I almost was expecting an across theme but the directional hints in the title cued me to it before I got too far in the solve. The first one is not an obvious dog per se so

This puzzle with a down themer set starts off 1d with FETCH. Loved it, despite taking my time filling some of it in here and there to complete it. The bottom half was the hardest for me to break into. My only complaint is that it ends with 53d TROUT instead of “treat” for all of the good bois in this grid!

Theme: All the theme answers contain both the strings “IM” and “HER”. 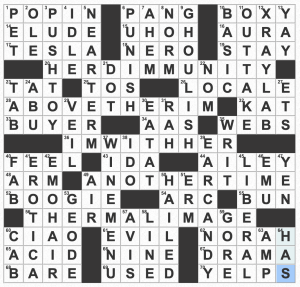 And for the revealer:

Quick write up today because I’m sick (and as such am already getting this out late) –  I like this theme, even though I’ve never heard of the band (I’m curious if someone involved in the puzzle’s creation is a big I‘M WITH HER fan, or if this is just an attempt to remain apolitical). I had never heard of ABOVE THE RIM despite being a basketball fan, and the excellent misdirect clue on THERMAL IMAGE rescues it from being the most boring theme answer.

There are 5 theme answers and still a lot of long down answers, which is impressive. OUTTAKE, GHOULISH, WINE MENU and EAR CANDY were personal faves. I also disagree with the clue of [Style with straight black bangs] for EMO HAIR because I believe the bangs need to be a little swoopy and cover at least one eye to be truly emo.