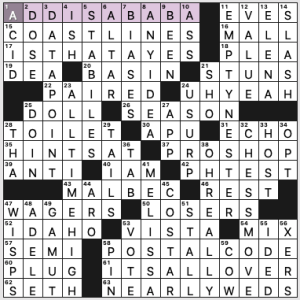 Not as tough as many other Saturday NYTs, and chock full of good fill and fun clues. 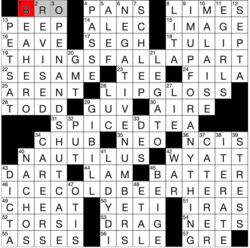 Little time to write this one up, so I suppose it’s good that I finished in 2:31. I would’ve liked a puzzle that put up more of a fight, though. THINGS FALL APART is a bit of a trivia chestnut at this point. ICE COLD BEER HERE was fun and also feels like Patti-bait, given her love of baseball. Nice fun fact about LIP GLOSS. I’m from Philadelphia, so I’m here for a SEPTA reference.

This one leaned a little too far into the trivia and away from the wordplay clues for my taste. 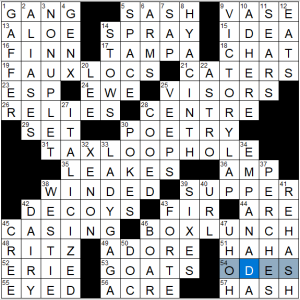 Themers all contain the letter string -XL-, neatly across a word boundary:

Long downs hold the grid together, and include plenty of assets for my money: LADY GAGA, HYACINTH, VICTORY LAP, EMPANADA. I particularly enjoyed the clue for the last, [34d Food that Maricel Presilla called “the ultimate master of disguise”]. 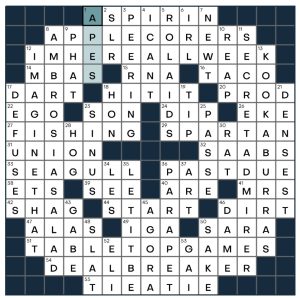 I’ve heard this kind of grid shape in which large chunks of blocks appear in each corner as “cookies.” I like that term a lot! The cluing throughout is fun and fresh and full of interesting and specific references.

I really, really need to remember IGA Swiatek. This is not the first time this name has stumped me! (49A [2022 US Open winner Swiatek]).