The title tells us that the Greek alphabet will figure in the theme clues and indeed it does in a way I don’t remember seeing before. I like this theme a lot; it includes one extra twist that adds to the fun. And the puzzle is generally nice and crunchy.

Each theme answer insert a Greek letter into a phrase. Wackiness results. 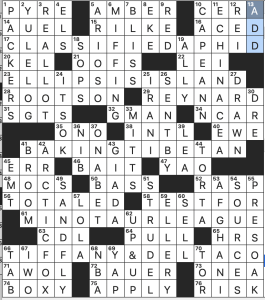 What I didn’t know before I did this puzzle: that RILKE was once Rodin’s secretary. This is the kind of trivia I live for.

Let’s look at our theme entries before we sort it out, shall we? 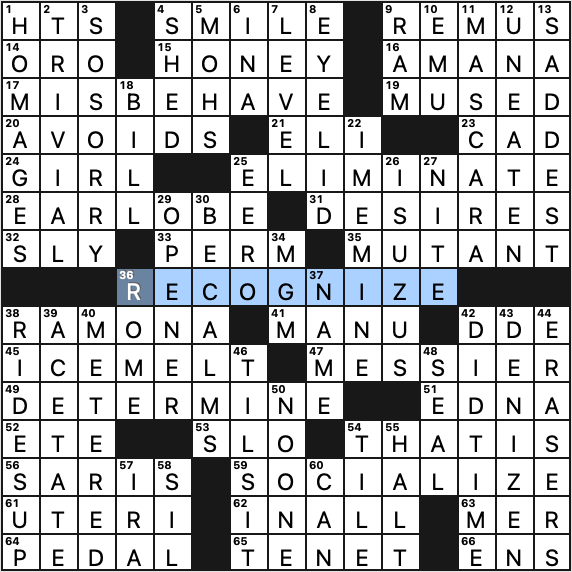 I finished the puzzle not fully understanding the theme. You can see each theme answer is related to the word in the clue, but it’s not quite on target. Let’s look at the first one. “Act” doesn’t quite mean MISBEHAVE. “Act up” does, however. “Take out” could mean ELIMINATE. “Pick up on” seems to go with RECOGNIZE, “Figure out” for DETERMINE, and “Hang with” for SOCIALIZE. Those were my first takes.

But there’s no consistency there, and it still seems off.

Somewhere along the way, I had my aha moment. “Out” is the keyword (as noted in the title). Yes “act up” can mean MISBEHAVE, but so can “act out.” Similarly, we get “take out,” “pick out,” “figure out,” and “hang out.” So there’s your theme. Remove the number and replace it with “out.”

Pretty nifty in the end. I wanted the numbers to mean something (I kept looking to those numbered squares in the grid for help, to no avail), but it’s sufficient that they join with the words to form phrases and that they can be replaced by “out” to form different phrases. And it’s mildly amazing that the numbers are in numerical order. It helps that all the theme entries are the same number of letters (nine), but they didn’t necessarily have to be. I suppose theme entries were specifically chosen to allow the numerical progression. That’s an elegant detail that I appreciate even though the entries themselves fall on the ho-hum side.

The fill feels pretty dense though there are no entries longer than seven letters. I like HOMAGES, “SO SORRY,” MASCARA, ICE MELT, EARLOBE, RIDES UP, MUTANT, DID TIME, and DENIZEN. I’d never heard of TILSIT cheese before, but don’t mind learning about it. It came originally from East Prussia, and this website says it’s similar to Havarti but with a “more intense flavor.”

Today’s theme: Quasi-Schrodinger squares (????) — that’s what I call them, anyway: 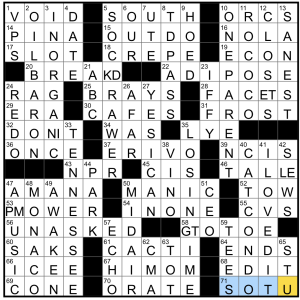 Ok, so I’ll admit that part of the reason that this played easy for me was that I just so happened to be looking at a similar puzzle by Sam Ezersky this afternoon, so the general premise was fresh in my mind as I got going.  Saw we needed the rebus up front for INORGANIC, and it all fell into place pretty quickly after that.  Sam’s puzzle used the alternating gimmick in both directions, whereas Barbara’s uses the vertical entries as traditional rebus squares.  Both approaches make for an interesting solve.

Cracking: CAT CONDO — although I consider myself a dog person, my 15 pound cockapoo is more of a house cat than Garfield.  And I’m sure he would love to just lie around in a DOG CONDO all day.

Sidetracking: MONACO — covering less than one square mile, it’s one of the smallest microstates in the world.  To me, there’s no place that evokes jet-set romance and intrigue like this tiny principality, where not one but two Bond movies were filmed.

Fantastic theme with a fun set of four themers today! 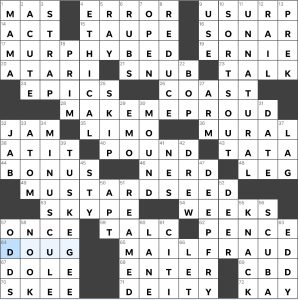 A strong set of themes today! Thankfully I had grandparents with a MURPHYBED so that filled in right away. The cluing for MAKEMEPROUD had me thinking of “…the best of it” but the title and a few crossings helped me out. Even with the title’s hint, MUSTARDSEED took me longer as there are many wonderful possibilities though to be fair this is probably the only one for the pattern. MAILFRAUD is not funny though it was a great way to round out this variety pack of a themer set. Who knew there was such a range of themers for this theme pattern? (Spoiler: Stella did—kudos!) It’s also fun that it alternates between the split of MUD: MU…D and M…UD.

Having never had a mud wrap, I’ve now enjoyed four this morning! And I’m impressed with my time on this puzzle, considering Stella constructed it. Awesome job and I adored the plethora of fantastic bonus fill!

Theme: All the theme answers are common phrases missing the letters U and R. 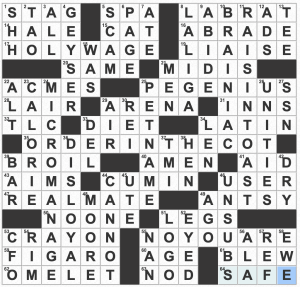 The revealer is a little lackluster, but the theme answers themselves are pretty funny, so I’ll take it. PE GENIUS and ORDER IN THE COT had me smiling as I solved. The title also effectively threw me off where the puzzle was going to go – I thought some of the words were going to be backwards, or something like that.

There were a lot of fun clues today – the top for me has to be [Organize labor on a small scale?] for MICROMANAGE, which is truly excellent. Other favorites for me were [Taylor Swift’s “___ Too Well (10 Minute Version)”] for ALL, [Karaoke night locale] for BAR, and [“Sweetie pie” or “Tony Pizza”] for PET NAME. (I had to Google the Tony Pizza thing. It’s a meme from over the Summer. It’s rare that a Universal Crossword makes me feel unhip, but this one has done that). Also, [Where wraps might be on the menu?] for SPA is a good clue, and also feels like a Universal/USA Today crossover (see the above puzzle!). 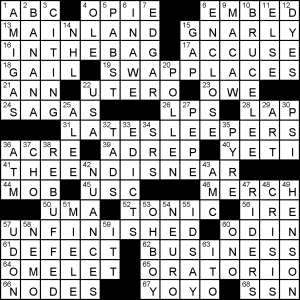 Today’s puzzle by Michael Lieberman is fairly open-ended, but has a strong visual impact. Four circled parts of theme answers spell out BUSINESSes that are UNFINISHED because they lack their terminal letter. The letters spell out YEAY, which I don’t think is anything.

Theme: Each theme answer inserts PM (the “night” referred to in the title) into a common name or phrase. 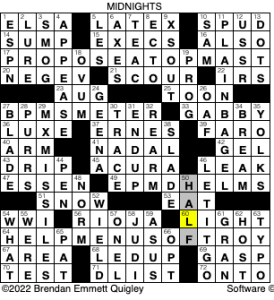 This late post is brought to you by server delays in the puzzle’s posting itself and me not being able to get to it until late, but I feel like it’s appropriate considering the puzzle’s title.

That said, I liked this theme. BEQ did a nice job working in these two awkwardly paired consonants into each theme answer. I was definitely thrown off from the start since I had METRONOME instead of BPMS METER. I loved HELP MENUS OF TROY because it’s hysterical. The others are likewise good, and I like that the themers play both off of actions and people’s names.

Briefly, I liked the inclusion of 11d [“Deli selection”] PLAIN BAGEL, the purposeful intersections between 46d [“Disney song with the lyrics ‘I don’t care / What they’re going to say’”] LET IT GO and 1a ELSA, and 69a [“[You can’t mean!]”] GASP. I struggled with 20a [“Beersheba desert”] NEGEV and 29d [“LGM-118 Peacekeepers, e.g.”] MX MISSILES in particular, relying on the crosses. The NE and SE corners fell first and I worked my way around from there.

Overall, love the Taylor Swift reference in BEQ’s notes and thought that the theme was well-executed.