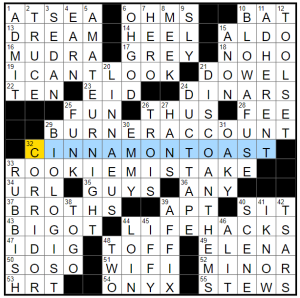 Lovely stair-step stack in the middle of this 70-worder, with a BURNER ACCOUNT, CINNAMON TOAST (don’t burn it), and a ROOKIE MISTAKE intersecting good fill like AMATEUR NIGHT and DISCO ANTHEMS.

Other fave fill: “I CAN’T LOOK,” LIFE HACKS (here’s one for you: If your banana resists peeling from the stem end, just poke a thumbnail in the other end and peel it from there–Americans are weird in insisting on the stem end), RUBBISH, Carl LINNAEUS, and BLOW A FUSE.

New to me: 16A. [Symbolic hand gesture in Hinduism], MUDRA. Looking it up … Oh! That’s familiar enough, just never knew the term for it. 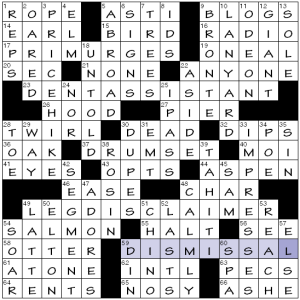 In each case the AL would appear as the suffix of the first word—an adjective—in the phrases. 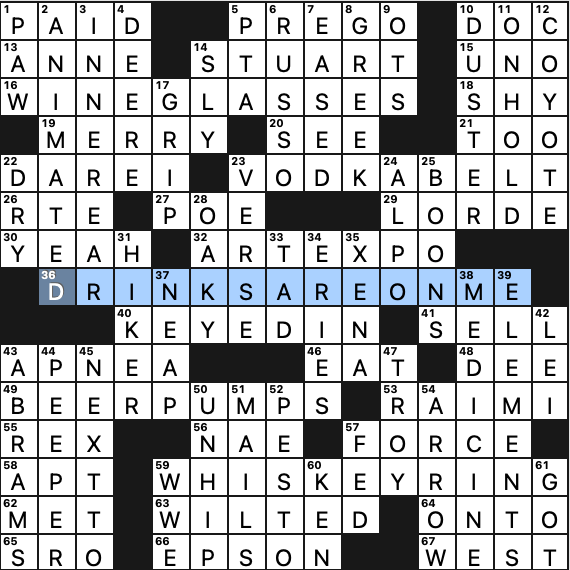 Welp, the revealer doesn’t state exactly what’s going on here. My first interpretation was that the drinks in the entries would be above the letters ME in the grid. And lo and behold, exactly centered under WINE in the first entry is the ME in MERRY. But where are the rest of them? Is there another way to have “me” in the grid? Should I be looking for DAVID TUFFS somewhere? Ultimately, this turned out to be a red herring.

It took me a little while post-solve, but I eventually realized the second words in each phrase can also be items you might wear: glasses, a belt, pumps, and a ring. So that’s my best guess to the the theme: we have an alcoholic drink paired with an article of clothing (i.e. something you might have “on”).

I generally like this kind of theme because it’s very tightly constrained. And the fact that the drinks are all alcoholic is a an apt and elegant touch. But a little more help in grasping the full theme would not have been unwelcome. And in my case, lack of familiarity with most of the phrases made it less fun.

Looking to the fill, the long stacks in the NW and SE are quite nice: ANIMATED with INNER EAR and MEDICINE with ELEMENTS. The other shorter stacks aren’t bad either with highlights ON HOLD, COYOTE, Stacey ABRAMS, and PEEPER.

Theme: Each theme answer’s second word is an anagram of WANDER. 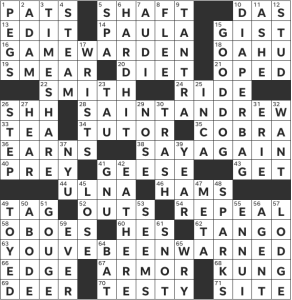 I really liked this theme. The amount of anagrams for WANDER is kind of incredible. I got GAME WARDEN mostly on the crosses, as with the end of SAINT ANDREW. YOU’VE BEEN WARNED was a fun spanner to fill in, especially as we approach Halloween.

The Down clues were my key to this puzzle. I almost immediately switched to Down answers since I felt like I could sail through those particularly fast. I really enjoyed GOOD DOG, DIAPER BAG, and TIME SHARE. 55d [“Ho-hum feeling”] was a good one for ENNUI. For a word like ENNUI, which appears more regularly in crosswords and less in my day-to-day life, “ho-hum” feels like a great synonym.

This puzzle is asymmetric, and the upside-down L in the upper right corner I think allowed for answers like GOOD DOG and DIAPER BAG. However, overall, the puzzle felt really balanced and clean. It, unlike its title, did not wander aimlessly.