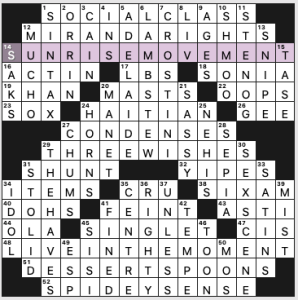 This one fell quickly, but there were just 64 clues to contend with, no part of the grid was at all cut off from the rest, and the clues didn’t strike me as particularly Saturday-tough.

If you’re of a certain age, this grid with left-right symmetry resembles an old rotary phone, doesn’t it? Or maybe the Yip Yip Martians from Sesame Street? Could be both—watch the video and judge for yourself.

The top stack of long entries has a social justice vibe, with SOCIAL CLASS, MIRANDA RIGHTS, and the SUNRISE MOVEMENT ([Environmental activist group with a Climate Mandate campaign]), and the bottom is much more a leisure class venture, with LIVES IN THE MOMENT, DESSERT SPOONS, and SPIDEY-SENSE from your comic books and movies.

Other fave fill, aside from these terrific 11/13/15 stacks: the genie’s THREE WISHES (if you’ve never watched Hulu’s series What We Do in the Shadows, check it out—there’s eventually a djinn, and all four seasons thus far are an utter delight), THE HAVES (see also: social justice stack), crunchy CROSTINI, and a SEX SCENE. Less keen on ACT IN with that dangling IN, STENOG (isn’t STENO bad enough?), and YIPES (most of us say YIKES and you know it). 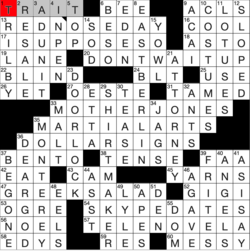 This puzzle is reasonably tough, with some good highs and a couple of irritants:

In general I preferred the cluing of some of the shorter- to mid-length entries to the long ones (especially the stair-step stack in the middle, which I thought was fine but nothing to write home about). 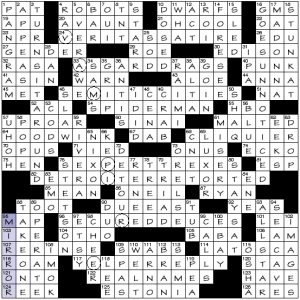 This is a stunner. Right off the bat, one notices the left-right symmetry, which echoes the title. Then there’s the split revealer: 95d [With 102-Down, what the second halves of each asterisked answer are, vis-à-vis the first halves (well, almost…) MIRROR | 102d [See 95-Down] IMAGES.

***Even before encountering the revealers I realized there was some quasi-palindromic activity going on and began circling the extra letters. These I noticed themselves had mirror symmetry, but that was a short-lived phenomenon.***

As you no doubt have realized, the extra letters spell VAMPIRE, and vampires—per folklore—famously do not cast reflections in mirrors. It makes perfect sense now that those letters do not appear on the righthand side of the grid!

This is a seriously amazing construction. A fantastic idea executed brilliantly. I can’t imagine how difficult it must have been to find/invent these phrases .

Further—and I have no idea whether it was intentional—the grid is reminiscent of a bat being held to demonstrate its wingspan. Allow me to demonstrate. Below is a watercolor  illustration of an Asian lesser false vampire bat (couldn’t find an image of a true vampire bat in the desired position): 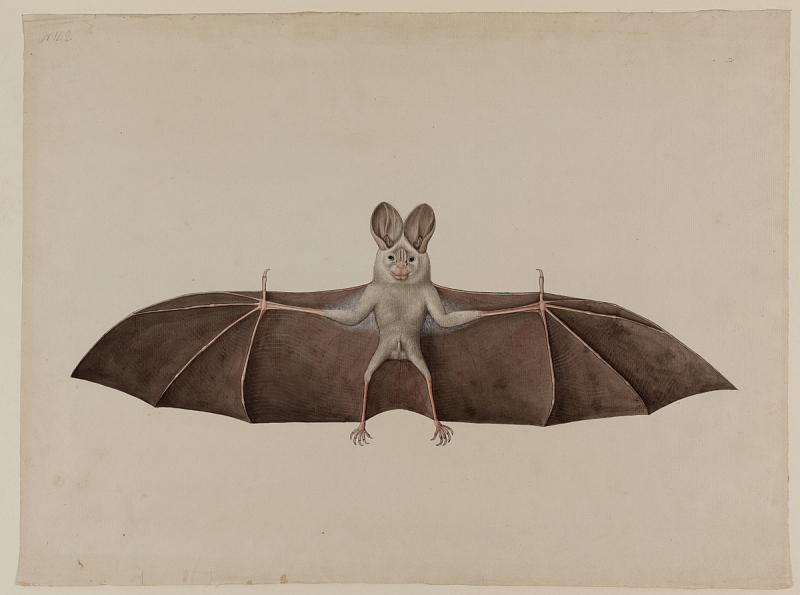 If I crop the image to eliminate the extremities (pinnae, uropatagium, patagia, et al.), focussing on just the head and torso, it looks much like the grid pattern, no?

Here, have a look:

(Perhaps picture it with a different bat species, one with a more robust chest and a pointier chin.)

Commenting slyly on the theme are the symmetrical longdowns at 3-and 16-down: 3d [Reforms] TURNS IT AROUND, [Isn’t spotted] GOES UNNOTICED. As if things couldn’t get more elaborate!

Truly a superb construction, and just in time for Halloween. 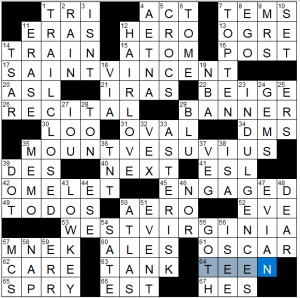 Themers are geographical locations that contain the letter string -TV- across a word break:

Delighted to learn quite a bit today: British pop-dance artist MNEK and singer TEMS, superheroes The New Agents of ATLAS from Marvel Comics, the aforementioned indigenous name for SAINT VINCENT. TRAIL CLOSED, HAIRLOVE, and INDULGENCES were nicely brain-tickly, as well. I highly encourage anyone who hasn’t watched HAIRLOVE to seek it out. Cheers! 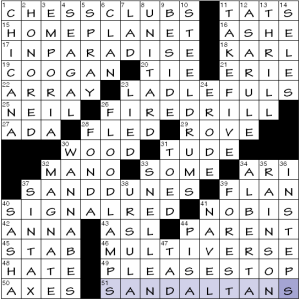 No idea how I managed to complete this one so quickly. It seemed as if I had made barely any headway for so long, and I wasn’t even in a solving mood.

Some of the clues were especially tough, oblique, and/or oblique, while a few were borderline unfair.

In the latter category foremost is 51a [Shades worn on your feet] SANDAL TANS. Is this the color of the sandals themselves, or the distinctively-patterned tan one gets on one’s feet from wearing sandals in the sun? The former seems greenpainty, while the latter struggles to justify the “worn on” of the clue. p.s. NAIL POLISH fits.

Another is 15a [Where one is from in the future] PLANET EARTH. Come on.

Definitely lives up to the Stumper sobriquet. 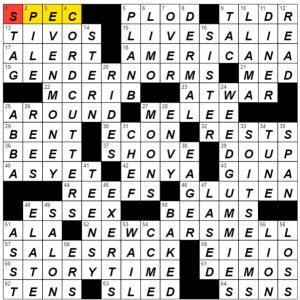 What a fantastic puzzle. The liveliness and humor injected into nearly every clue is what makes this one really shine. Aside from the above favorites we have a ton of common entries that are given fresh and/or interesting cluing angles, and there really are too many to list but a few of my favorites are GINA 43A [“Damn, ___” (“Martin” catchphrase)], PLANB 5D [Morning-after pill brand], RIDES 20D [Planes, trains and automobiles], CHEF 31D [Culinary figure such as Kwame Onwuachi], LOSS 56D [“Their ___!” (friend’s remark after a rejection)]. Overall, this grid is really well done and super clean, as we can expect from Universal. It hits the sweet spot of just easy enough and and makes a fun experience for the solver, which in the end is what really matters.

I want to take this opportunity to (re)-emphasize that Universal is a great place for aspiring constructors to get their feet wet – response time to inquiries is generally pretty quick, and the editing team provides valuable feedback to constructors at all levels of experience.

Thank you Kim and Kate!

Can this even be considered food? A McDonald’s worker decides to reveal how a McRib is made. pic.twitter.com/yFraU7JGhp