Alternative title for this puzzle: “Makerspace.” Each theme clue is a familiar phrase of the form [___ maker?], and each answer is the punny result of changing the meaning of the first word. 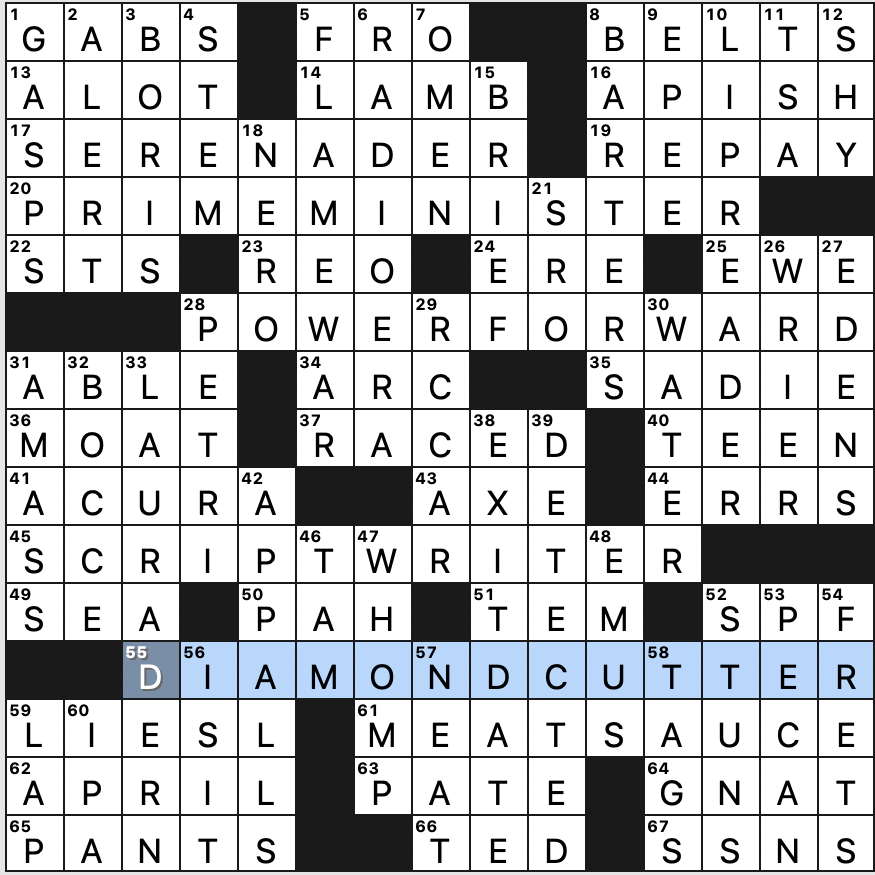 Very nice. Each clue and answer is solidly in the language, and the puns are easily recognized without being groanworthy. Works for me.

Highlights in the fill include LAURA DERN, LIP READER, RADIO ERA, MEAT SAUCE, and FLAME WAR. Do people still use this last phrase? I remember it from way back in the Usenet days, but I don’t recall hearing it too often lately. Also, EXIT DATE. I can only think of it in military terms, like when the US pulls out of whatever country it’s in. Any other examples of the term you can think of? 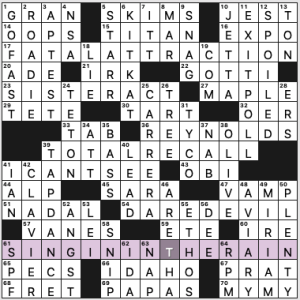 The theme here hinges on letter banks, with five movies clued by way of movie or TV show titles that contain the same letters. Not the same number of each letter, though, so not anagrams.

I like this sort of wordplay, and the “same characters” fake-out.

I liked the fill as well, though those solvers who don’t tend to know all the proper nouns might be feeling a bit frustrated here. I counted about 17 names, and it seems that complaints pick up after about 14 propers in a puzzle.

11d. [Survey used in election night coverage], EXIT POLL. I’ll bet I’m not the only one opting for movies and other non-news diversions Tuesday night. I already watched Captain Marvel and now I may turn to Anchorman 2: The Legend Continues. Special effects sci-fi superheroes and silly comedy? Yes, please. 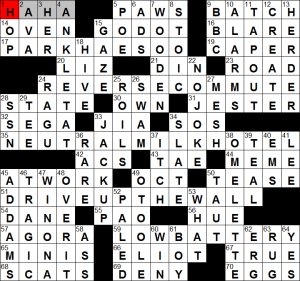 Today’s theme by Eisenberg-Rapp is an old chestnut – PRNDL – with a few newer twists:

For the most part, the rest of the puzzle played quite straight-forwardly. A few trickier or hipper spots included [Culture essayist Tolentino], JIA. I considered an R there; [Art that may be covered by a boot], ANKLETAT; [Submit, in an MMA match], TAPOUT; and misdirecting [Hallway runner], RUG.

An excellent puzzle that’s a fun and fresh solve! 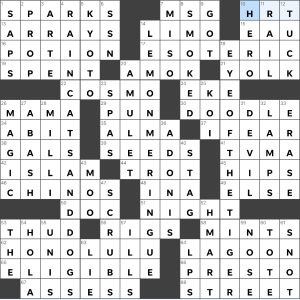 Theme: the word “drop” can be added to the first word of each themer to form a common phrase

Themers are in the downs today, hence the apt title hint. We’re enjoying the last days of nice sunny weather in Ohio before tomorrow when it will RAINCATSANDDOGS and finally cool off into fall/winter weather it seems. I prefer my LEMONMERINGUE with more filling and less topping but it seems like many recipes are just the opposite. The cluing of EYEOFTHETIGER wasn’t as effective since its other lyrics are more iconic for me but perhaps many of you recognized it right away. With today’s theme, we get RAIN DROP, LEMON DROP, and EYE DROP.

Stumpers: MAMA (“wail” first came to mind due to cluing), CHINOS (“khakis” was all that I could think of so needed a couple of crossings), and ABIT (kept thinking along the lines of “kinda”, “sorta”, “-ish” and “like”)

So much great fill that I usually don’t see and a fantastic grid design! Lots of misdirection in the cluing so it took me longer to complete the solve today but I’m very happy with the puzzle so more than glad to be steeped in it for longer. Very creative and fresh! What did you all think? 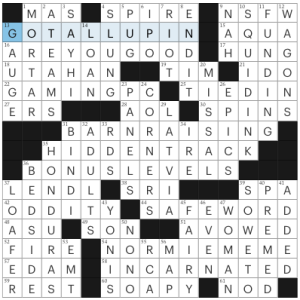 Breezy and fresh puzzle, perhaps a couple notches easier than I was expecting.

Fave fill: GOT ALL UP IN my business, GAMING PC, HIDDEN TRACK on an album, SAFE WORD, BEDSIDE manner (if you don’t have people skills, please do not go into clinical medicine!), jigsaw puzzle CORNERS (granted, it’s the clue angle more than the entry itself that I like), SQUID INK pasta, SOWETO.

Freshest clue for old cheese: [Cheese that’s a bad omen in “All Quiet on the Western Front”], EDAM. Please, nobody tell me the context. I’m concocting scenarios that are surely more entertaining than the truth. 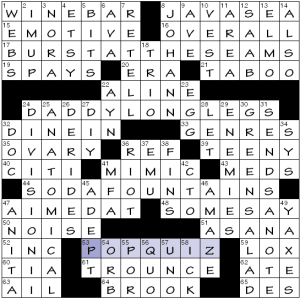 Glad I didn’t see the title before solving this one. It immediately evokes the phrase that functions as the revealer.

Nice touch that the clues are presented as numbered questions, as they would be on a test. Because the revealer and the first theme answer are of differing lengths, it makes sense that a grid with left-right symmetry was employed. 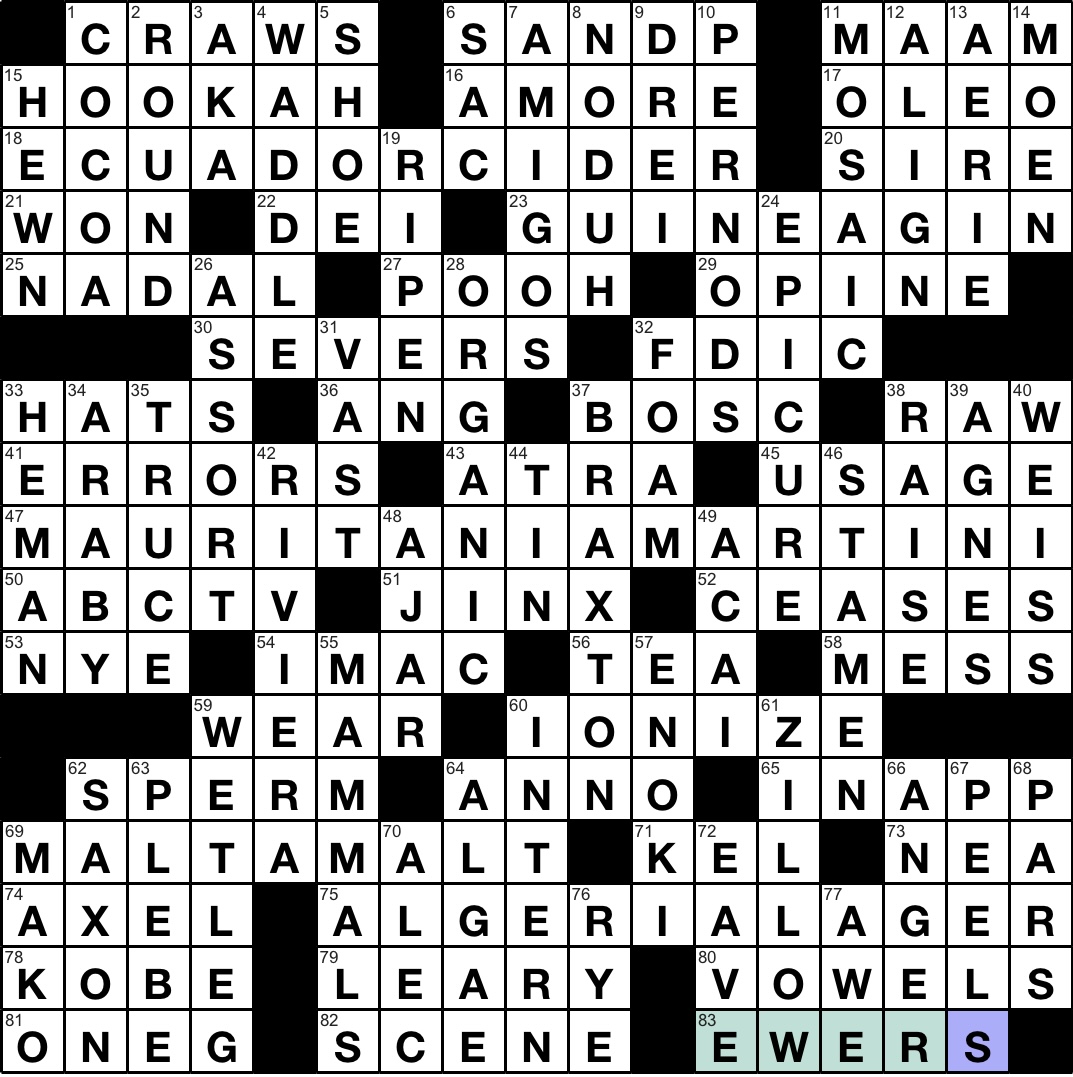 This week’s AVCX Classic was a perfect happy hour inbox delivery with a 2/5 difficulty from Brendan Emmett Quigley.

Each themed answer today combines a nation  with a spirit that shares the same consonants. I’ll raise my glass to BEQ for finding this set of answers and fitting so many of them into the grid so cleanly. In addition to the below entries, we find VOWELS in the grid as well, clued as The only kinds of letters that differ between the two words in each of this puzzle’s theme
answers, in case you needed an extra hint for the connection between the places and drinks.