Note: Fireball is a contest this week. We’ll post a review after the submission period closes.

Theme: Familiar phrases have a specific word replaced by a state abbreviation, which when read letter-by-letter, sounds like the missing word. 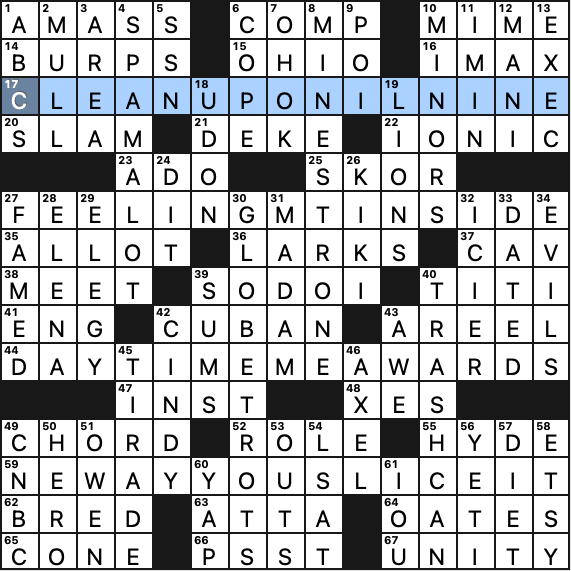 It wasn’t until I made it through the second entry that the penny dropped. Having to pronounce the two state letters was a bit unexpected, but once I caught on to it, I liked it fine. The phrases as read with the state names can get a little awkward, but they have a certain charm to them. I especially like the Montana entry. 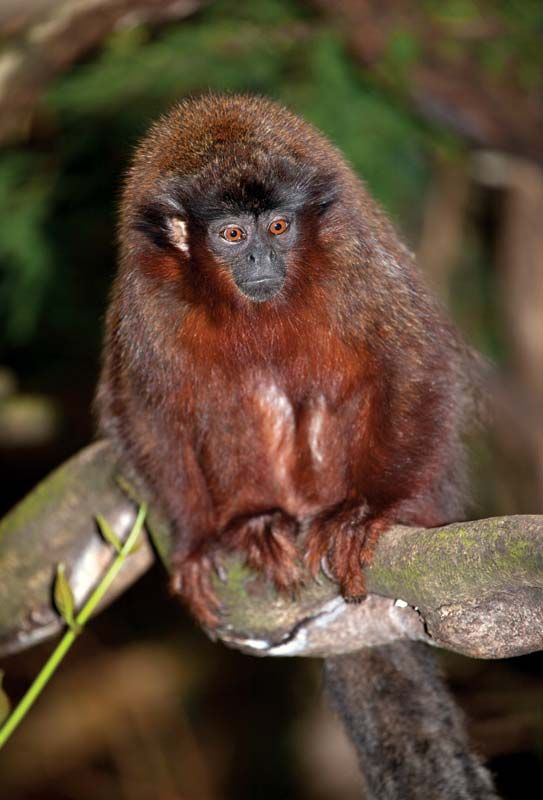 Elsewhere, we have SPAMALOT, MINESTRONE, GLOBE TROTS, and TRASH CAN. A fun collection of long fill entries, that. I needed all the crossings for TITI [Soft-furred monkey], as it’s been a long time since I’ve had need to think of one. It’s interesting to note that their tails are not prehensile. 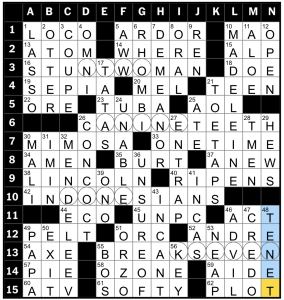 I don’t know what game this is.  The closest thing that comes to mind evokes accusations of unfairly placing ships diagonally, and to a lesser extent, being jealous of people that had a functioning battery-operated version with *KA-PLOWIE* sound effects.  But I think what’s referenced here is simply spanning PLOT points along two parts of a theme answer, and having them spell (appropriately enough) PLOT.  I was still waiting for the app to treat me to some kind of underwater explosion upon finishing the puzzle.  I appreciate the unusual grid elements that keep the puzzle more in line with a Thursday curveball, although I came close to a personal record and suspect others will do the same.

Cracking: MALI — my family used to live in Abidjan, so I have a soft spot for all things West Africa.  TIMBUKTU (someone please put that in a puzzle without cluing it as “the middle of nowhere”) was, once upon a time, the most important center of commerce and academia in all of Africa.

Slacking: UNSURE OF — hard to make anything ending in “of” sparkle, and the longer the phrase, the worse it gets.  AS OF, okay.  IN ANTICIPATION OF, barf.

Sidetracking: OMNI — okay, I don’t know if you’ve stayed in the average Radisson lately, and I recognize that they have both entry-level and mid-scale properties, but on the whole they are most certainly not drawing from the same clientele. 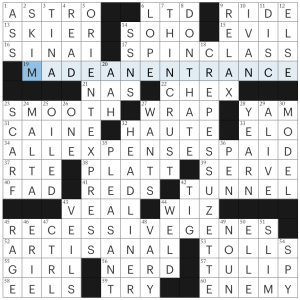 Hey folks! I breezed through this puzzle, which had four interlocking long answers in sort of a tic-tac-toe pattern. My favorites were MADE AN ENTRANCE and CREPES SUZETTE. RECESSIVE GENES probably would have benefitted from a hard clue, and ORIENT EXPRESS didn’t do a ton for me since I haven’t read any Agatha Christie. (I did really enjoy the movie See How They Run, which riffed off of The Mousetrap.)

I also liked to see SPIN CLASS. I’ve never taken these– I’m on a HIIT kick right now. But I do like biking through New York, especially in Brooklyn where the trains leave a little to be desired, and the busses appear to run twice an hour. Some of the longer slots went to standard words that didn’t feel super colorful, like PLEASANT and ARTISANAL, but that also means we get a very smooth puzzle.

Theme: Each of the theme answers strategically (specially?) adds to two K’s to a common item, idea, or phrase. 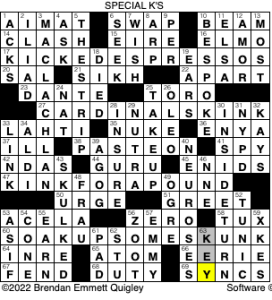 KICKED ESPRESSOS is my favourite of these, and all of them are pretty solid. I also liked SOAK UP SOME SKUNK (though RIP to anyone who’s had this experience). It’s a bit odd that IN FOR A POUND is only part of the longer “in for a penny, IN FOR A POUND” phrase, but it still works.

There’s so much theme content in this grid that I feel like it was key to move through the puzzle, which can be tricky if you don’t get the themers right away. BEQ helped us out with this, I think, by including an explicit revealer in KAYS. From there, I was able to move through the answers I was most confident about in combination with the themers to finish the grid.

Some of my favourites included:

I was less crazy about 21a [“Hindu in a turban”] SIKH because SIKHs aren’t Hindu.

Overall, though, I had a good time with this, and the theme worked really well in the grid itself. In what may seem obvious, this puzzle felt very linked to its theme, but what I mean is that it was an integral part of the fill itself. 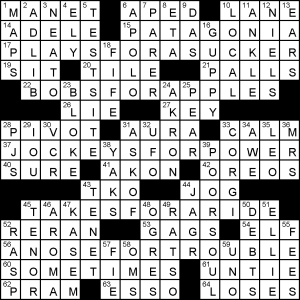 David Taber & Laura Moll give us four XforY phrases. The clues manipulate these into new meanings by linking X & Y to specific jobs and implying a bartering between members of these jobs. The clues felt rather awkward and forced to me, but that is often the case with such puzzles…

I found the puzzle trickier than usual, but I can’t point to much outside of the oblique theme clues that is tricky in and of itself. [Nevada copper town], ELY is a place I bet few Americans could find on a map, but very little was obscure or misdirectingly clued. 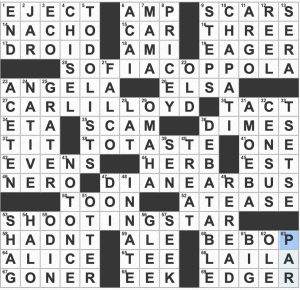 Nice interpretation of the word “shoot” in three different ways – SOFIA COPPOLA shoots movies, CARLI LLOYD shoots soccer balls, and DIANE ARBUS shoots photographs. The only thing I don’t like about the theme is that it feels a little loose with its people – why this director/soccer player/photographer over someone else? – but I do like how all the people highlighted are female.

Like any puzzle that’s based around pop culture, this one’s difficulty will come from if you’ve heard of the people or not. I personally knew Carli and Sofia, but DIANE ARBUS took me every single cross. The selection of people is nice in that it encompasses a wide range of knowledge, which should appeal to many folks.

Highlight fill clues: 4d [Sculpt a body?] for CHISEL, 23a [Lansbury who will appear posthumously in “Glass Onion”] for ANGELA (I am very hyped for this film)

Finally something that you will be happy to “Fill Out”! This was a speedy (and satisfying!) solve for me so I imagine others will be even quicker. 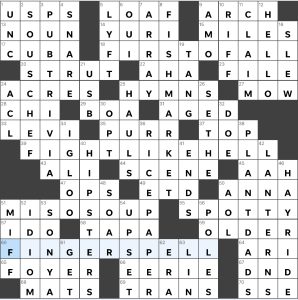 Theme: the word “fill” is brackets each themer, split with each starting with FI— and ending in —LL

FIRSTOFALL dropped right in for me, since it’s a go-to phrase of mine. FIGHTLIKEHELL looks me longer though I got the first part but I kept thinking about “might” since it felt suspiciously absent from the cluing though that intinct didn’t prove correct. The theme didn’t occur to me until after the solve otherwise the title should have been enough of a hit had it figured it out with the first themer. FINGERSPELL is used when there typically isn’t a sign for the word or when makes sense so this is usually the case with names.

The bottom third tripped me up a little bit and slowed down my solve time but otherwise I cruised through this puzzle and just adored it! So much delightful fresh fill paired with a great grid that allowed for tons of lengthy bonus fill. Excellent and I hope that we see more collabs from these two!